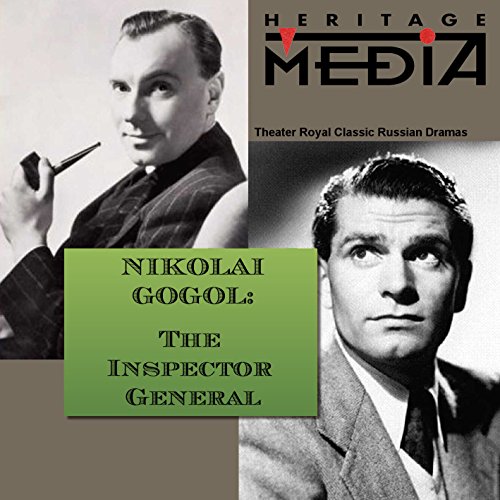 By: Nikolai Gogol
Narrated by: Laurence Olivier
Try for £0.00

Nikolai Gogol's The Inspector General, known also as The Government Inspector, was first published in 1836. It was based on an anecdote first recounted to Gogol by Pushkin. Laurence Olivier plays the irresponsible gambler Ivan Alexandrovic Khlestakov in this satire on the greed, corruption and stupidity of Imperial Russia.

"Theatre Royal" is a series of radio dramas first broadcast by the BBC in 1953 and in the USA soon after. Starring many of Britain's finest actors, it was the only radio series in which Lord Olivier took a major role.

What listeners say about The Inspector General

I was initially unsure how I would like a Radio Program's version of "The inspector General", but ended up really enjoying the entire 18 minutes. The story (although short) keeps us amused by satirizing human greed, stupidity, and the extensive political corruption of Imperial Russia.

I gave it a 5 Star on both Performance and Story. It's simply great for what it is.

Gogol's story is a timeless classic, showing corruption and superficiality of the ruling class (in this case town's mayor, his family, and other office-holding citizens). Although acting is very good, I must crop 2 stars due to the fact that the music used in this audiobook is utmost loud and quite unnerving.

I love this one

I took this in school back in fifth or sixth grade. It was brilliant then, and it's still brilliant now. Comedy used as social criticism at its finest.

Interesting version of the Gogol story

Short radio dramatization of the Gogol short story with Sir Laurence Olivier and others not named. This is a humorous, short listen that brings out the satire of the original story. The music interludes are jarring, but the actors are excellent.