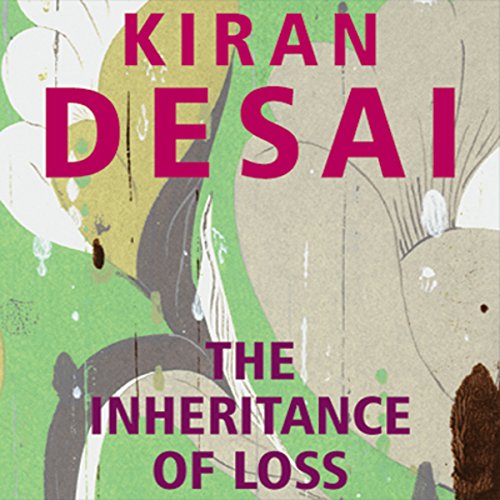 The Inheritance of Loss

By: Kiran Desai
Narrated by: Tania Rodrigues
Try for £0.00

At the foot of Mount Kanchenjunga in the Himalayas lives an embittered old judge who wants nothing more than to retire in peace. But this is far from easy with the arrival of his orphaned granddaughter Sai, come to live with him and his chatty cook. Biju, the cook's son, is trying to make his way in the US, flitting between a succession of grubby kitchen jobs to stay one step ahead of the immigration services.

Unbeknown to any of them, a Nepalese insurgency threatens Kalimpong, impacting Sai's blossoming romance, and causing the judge to revisit his past and his role in this grasping world of conflicting desires.

"Kiran Desai is a terrific writer. This book richly fulfils the promise of her first." (Salman Rushdie)
"An insightful and often humorous commentary on multiculturalism and post-colonial society." ( Guardian)

What listeners say about The Inheritance of Loss

When will something happen?

This turgid account is written with beautiful prose which drew me in. Unfortunately nothing actually happened. The story circles endlessly round as the characters experience repeatedly the diappointment of their small lives being affected by the grand sweep of local, national and global influences.
Every 50 minutes or so it seemed as if something was about to happen which could constitute a storyline, but within minutes it vanaished and we moved scene and/or time and the story was gone.
Beautiful to hear but like candy floss - lacking in substance.

The tragic consequences of colonialism and class

Kiran Desai's vivid writing of the northern mountainous regions of Kalimpong was well captured in this desperate novel of the aftermath of British colonialism and the caste system in India.

The events are quite accurate as my own family who resided there during this time can substantiate. The violence that ensued the nation following independence was one of many tragic consequences of a country attempting to repair itself after massive divisions were sown.

At the same time, the experiences of an immigrant abroad is a good reflection of how imperialism allowed people to make the journey while still being treated as a second class citizen.

The story itself surrounding a small community of elites in the northern regions is interesting as many of them attempt to face their own demons and find an identity. The reading was fantastic, as it is difficult to do a genuine Indian accent without sounding like a bad comedy. Poignant, quite long, and well written.

For those of us brought up with the staple diet of Prawer Jhabvala, Rushdie, and Naipaul and have watched as the new generation of Ali and Zadie Smith have rushed headlong into presenting the new experience in Europe ? Kiran Desai provides a welcome new voice and a welcome new perspective.
Here the standard ?British influence in India/Last Days of the Raj' axis forms only the backdrop to the Indian experience in New York and the remnants of history?s lesson to the development of the Indian Constitution. A new voice addresses the gap in expectation and reality that is imposed on people who have had their own cultural market driven norms mixed up and undermined both politically and personally in a manner that is fresh and accessible.
Kiran Desai represents a new wave, a new chapter ? where the box of Post Colonial Fiction which has been used to carry so much before is finally put to one side. An Inheritance of Loss?, maybe for the characters but this is a thrilling major gain for the new generation of readers - and in this performance a joyous and skillful new voice in narrator Tania Rodrigues.

The dissection of cruelty

What made the experience of listening to The Inheritance of Loss the most enjoyable?

Magnificent, extraordinary writing. A wonderful command of a broad sweep of subjects, from the politics of insurgency to the ice of a loveless marriage, from mountain landscapes to comical dialogues between characters stuck in their own obstinate outlooks. Desai is highly adept at moving back and forth in time. I thought Tania Rodrigues did a great job of reading it.

What was one of the most memorable moments of The Inheritance of Loss?

So many. The robbery at the beginning. Biju's attempts to make good in New York. The downfall of the poor priest trying to photograph a butterfly. But ultimately, what will remain with me, I fear, is the judge's cruelty and its origins in racist ostracism.

She managed a wide range of voices, even rather a good song at one point, capturing the atmosphere of the book and its characters very well.

Many. The fate of the man who is tortured for the crime he didn't commit and that of his family is particularly unbearable. I tried not to be disproportionately moved by the fate of the dog, amid so much mayhem, but did not succeed.. The judge's wife, unfortunately, was one of the characters who was not entirely realized.

I have to say, this book left me wondering to what extent novelists have a duty to infuse a little hope in their fictions. Yes, Sai will make her way, and possibly her young man might also be 'saved', but the overall despair exuded by the book, in spite of the fact that there are long sections of very funny dialogue, is extremely depressing. In that sense I was almost reminded of Jude the Obscure.

challenging, not pleasant but somehow worthwhile

I struggled with this book at times. There is a raw honestly in parts of it which reflects the ugly side of human nature. At times this made it difficult to listen to however this is also what made it good. This is far from a light fluffy read. I feel I have learned a lot about a period and culture that is very far from my own and yet the humanity of the characters was still very relatable. I have a feeling some scenes from this book will stay with me for a while. I cannot quite decide whether is it something I would give as a gift or not. I found the narration excellent. Overall I would say it is worth a read.

While the voice reading is lovely and soothing (very at odds with the nasty narrative), the recording is very strangely edited, with jerky gaps that confound meaning

This book jumps from character to character so fast not allowing the reader or listener time to digest what's happening. So much nothing in one book

The story resonated well with me, with my own experience growing up in small town Malaysia. It aptly captures the ambivalence of identity, the rage and the hope, and pretenses, that we, too, at newly independent Malaysia felt (and, in a way, continue to feel) and exhibited.

The narration of Tania Rodrigues was excellent, although it took me a while getting used to her pauses between sentences. Some familiarity with Kalimpong, its surrounds and the insurgency of the 1980's will enhance the listening pleasure.

A compelling story, but with a tragic ending

This is obviously one of the best literary piece of modern day literature. One must engross himself . Savour it by giving one' time and effort . A good read for everyone.