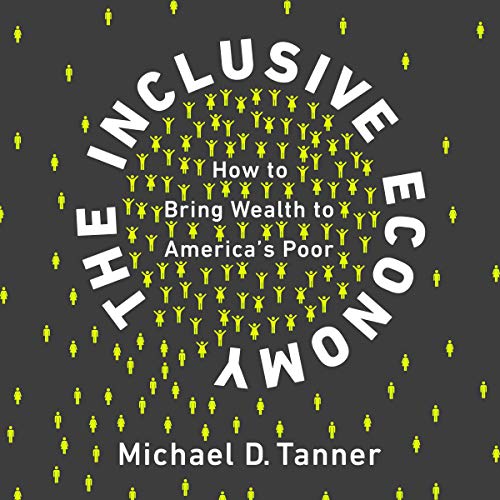 By: Michael D. Tanner
Narrated by: Todd Barsness
Try for £0.00

In a bold challenge to the conventional wisdom of both liberals and conservatives, Michael Tanner, a senior fellow at the Cato Institute, looks at the reasons for poverty in America and offers a detailed agenda for increasing wealth, incomes, and opportunity. The author argues that conservative critiques of a “culture of poverty” fail to account for the structural circumstances in which the poor live, especially racism, gender discrimination, and economic dislocation. However, he also criticizes liberal calls for fighting poverty through redistribution or new government programs. Too much of contemporary anti-poverty policy focuses on making poverty less miserable, and not enough on helping people get out of poverty and becoming self-sufficient.

The Inclusive Economy calls for government to stop doing things that push people into poverty, and provides a detailed roadmap to a new anti-poverty policy that includes criminal justice reform, greater educational freedom, housing deregulation, banking reform, and both increased and more inclusive economic growth. The policies put forth in this title are designed to empower poor people and allow them to take control of their own lives.

What listeners say about The Inclusive Economy

A must read for everyone. So much of our welfare system is broken and Tanner offers solutions to reducing poverty without throwing money at the problem. He points out flaws in both liberal and conservatives approaches and ends on a hopeful note for the future.

A Primer for those Sincerely Working for Change

Will listen yet again. most helpful in affirming my work with on the job training and on the job Learnings for the working poor