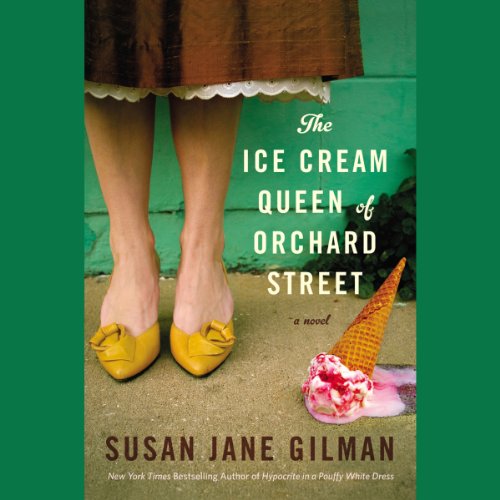 In 1913, little Malka Treynovsky flees Russia with her family. Bedazzled by tales of gold and movie stardom, she tricks them into buying tickets for America. Yet no sooner do they land on the squalid Lower East Side of Manhattan, than Malka is crippled and abandoned in the street.

Taken in by a tough-loving Italian ices peddler, she manages to survive through cunning and inventiveness. As she learns the secrets of his trade, she begins to shape her own destiny. She falls in love with a gorgeous, illiterate radical named Albert, and they set off across America in an ice cream truck. Slowly, she transforms herself into Lillian Dunkle, "The Ice Cream Queen" -- doyenne of an empire of ice cream franchises and a celebrated television personality.

Lillian's rise to fame and fortune spans seventy years and is inextricably linked to the course of American history itself, from Prohibition to the disco days of Studio 54. Yet Lillian Dunkle is nothing like the whimsical motherly persona she crafts for herself in the media. Conniving, profane, and irreverent, she is a supremely complex woman who prefers a good stiff drink to an ice cream cone. And when her past begins to catch up with her, everything she has spent her life building is at stake.

"[A] standout travel memoir...Gilman's descriptions of their trials and tribulations crackle with wit." ( Booklist)

What listeners say about The Ice Cream Queen of Orchard Street

So sue Susan", the author, for her terrible book

When will authors learn that they are rarely qualified to read their own books?? A Jewish accent, which was a critical part of the story was something she could not pull off. I could do better and that is not saying much! If she said, "so sue me", or "darlings" one more time I was going to vomit. It was a long, drawn out, boring story about a totally unlikeable character. The beginning was actually an interesting account of the immigrant experience in turn of the century NYC. Then it just went downhill very quickly. I tried listening to the entire book because it was my bookclub selection- but couldnt make it past 12 hrs. By then I really didnt care what happened to all the self-centered characters. So, sue me, it was terrible.......

Hired someone else to do the narration. Not all authors should narrate their own books. It took a lot for me to get past her voice. There was little difference between the characters' voices and it was clear she was not a skilled narrator. The story, however, was fabulous.

This story was excellent. It was not the story I was expecting from the cover. The cover suggests a more "girlish" story line, but I was pleasantly surprised by the depth of the characters and the story itself. I would most definitely recommend the book. I eventually got used to the narrator, but I have to admit I almost returned the book after the first few chapters and would have had I not become so interested in the story.

I listened to this over the summer and just loved it, author-narrator and all. I sneak up on this Audible page every so often, hoping to find something new by this author.

Shiksa or Shikse: Derogatory term for a non-Jewish woman.

1. It's usually not an issue when an author writes as/about another race, religion, ethnicity, or gender if they are skilled, but this author is not.

2. She has the syntax right for "Jewish-speak" but not the cadence or inflection so it's like some clueless white guy trying to do "gangsta-speak."

3. Author assumes everyone understand the 100 or so Yiddish terms she uses over and over and over with no context. They don't. "He's a gonif!" (theif). "Such a macher" (big shot). I happened to Google "common Yiddish terms" to show to my boyfriend after listening to a Weird Al Yankovic song. I was laughing but he didn't know any of the words other than "oy." She does this with Italian too. My Italian is good enough, but if you don't speak Italian, you're lost. And in this case she uses whole sentences instead of single words, though about 75% less than the Yiddish. Honestly, I've never heard so many foreign words used so often in any English book EVER.

4. Author is a terrible narrator. Everyone sounds the same (except the stuttering husband--and for some reason she does an Italian accent). The 5-yr-old main character sound the same as when she's 75. She does not do a Yiddish accent and does not pronounce the Yiddish words with a decent accent.

5. Unlikable main character. She's fine as 5-yr-old but becomes progressively more unlikable as the story goes on until she's a completely horrid. Unfortunately, you know right off the bat that she becomes a total wretch because it flashes back from the present (when she's about 75 and says "so sue me" and "darlings" about 100 times each--amateur hour when an author does that) to the past.

6. What is she? She's a Jewish (from Russia) but ends up living with Italians from the age of about 6 until she marries. But how does she raise her son? Who knows. It's never mentioned. She marries another Jew but there's no Jewishness in sight other than the Yiddish. She kinda-sorta passes herself off as Italian but the Yiddish never goes away (the Italian does), and she marries a Jew in the 1930s why would people think she's Italian? She doesn't seem to go to church after she gets married but she doesn't go to synagogue either. This aspect of the story completely disappears when she's around 20. Very odd.

7. The story: Well, the "building an ice cream empire" part was interesting.

Great story. Couldn't take the voice of the narrator another minute. I gave up on this book after Chapter 7. The narrator's voice made everything about the book annoying.....tone didn't match the story or characters. Akin to bad infomercial or local tv commercial acting. Very lame and unconvincing. The, "so sue me" 's and "darlings" were over used and equally annoying. The story was interesting and compelling, which Is the reason I made it through almost 7 chapters. But, life is too short to be annoyed by leisure reading (or listening).

It's difficult to write a short review on a smart phone screen. But if i convince just one more person to read this story, the effort will be worth it.

Don't sue me! I loved every minute of this novel

Only one-third into this book, I was tweeting about it and telling friends. The story was captivating and the characters complex and interesting. Also, the historical aspects were brilliantly placed and informative.`

What other book might you compare The Ice Cream Queen of Orchard Street to and why?

Perhaps the author's earlier book, Hypocrite int he Pouffy White Dress. Her style is her own, so comparisons are a bit meaningless.

What does Susan Jane Gilman bring to the story that you wouldn’t experience if you just read the book?

The early years of the immigrant in lower Manhattan and the struggles to survive, succeed and thrive -- with humor.

I never answer this question because I think a novel is a novel and a film is a film It's a silly comparison.

This book made me laugh, think and cry a little, too. It was so rich in detail and characterization. I wanted to be there and be a friend to Lillian. I also thought the social commentary of this period of American history was so well done and thoughtful. I can only hope that Ms. Gilman is working on her next novel. I know I'll buy it.

A good story that kept my husband and me engaged for all of our road trip from RI to DC.

I couldn't put it down!

Where does The Ice Cream Queen of Orchard Street rank among all the audiobooks you’ve listened to so far?

What other book might you compare The Ice Cream Queen of Orchard Street to and why?

The Goldfinch and The Signature of All Things. I couldn't put those 2 down either.

What does Susan Jane Gilman bring to the story that you wouldn’t experience if you just read the book?

I felt I was right there with the characters.

Who was the most memorable character of The Ice Cream Queen of Orchard Street and why?

Malka - such a strong person, and so flawed in her humanity.

I didn't even finish; it felt like a chore

What would have made The Ice Cream Queen of Orchard Street better?

I read the first couple of chapters of this book as a sample on my kindle. The beginning of the story kept my attention enough to want to keep going so I downloaded the audio book. I love historical fiction and have lately been fascinated by the stories of immigrants in the early 20th century. Once the book got underway, though, I lost interest. I didn't like the fact that it jumped back and forth between time periods- I didn't enjoy hearing about Lilian as an adult. There was a little too much detail into her ice cream business, and I also didn't empathize with her once she grew older. If anything, she started annoying me, and I have trouble reading books in which the main character isn't even remotely likeable.

Would you ever listen to anything by Susan Jane Gilman again?

Who would you have cast as narrator instead of Susan Jane Gilman?

I don't know; I just wasn't a big fan of her voice, especially when she tried to do accents. Perhaps she should not narrate her own works, and instead hire someone who is a professional.