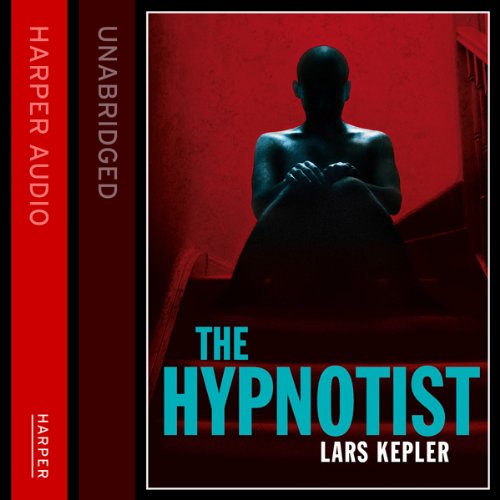 By: Lars Kepler
Narrated by: Eamonn Riley
Try for £0.00

You need clues. You need time. You need a motive. You won’t have any of them. When a whole family is murdered in Stockholm, Detective Inspector Joona Linna knows there is only one person who can help find the perpetrator. Erik Maria Bark, retired hypnotist, is called in to work with Josef Ek, a fifteen-year-old boy who witnessed the brutal murder of his family.

Following a series of accusations by his patients, Erik is reluctant to return to his craft but makes an exception for Joseph Ek. As he delves deep into the boy's mind, he discovers that Josef murdered his own family on the orders of his sister Evelyn. When Joona and Erik journey deep into the woods to find Evelyn, she admits that she was abused by her brother for many years. When she refused to submit to him, he took revenge on the entire family. When Josef escapes from custody and Erik's only son Benjamin disappears from the family home, Erik is thrust into a world of violence and gang warfare, forcing him to revisit his past to discover the truth.

What listeners say about The Hypnotist

I gave up after 20 minutes, so apart from replacing the narrator, I couldn't say.

What will your next listen be?

The next book in this series read by Saul Rechlin; a better narrator (although still lacking the actorly sparkle one obtains from 'proper' voice actors like Sean Barrett).

Limited ability to characterise appropriately, made certain characters sound dim-witted, used inappropriate British accents for regional players. Monotonous. Didn't sound like he was taking in what he was reading - parts of sentences were emphasised badly and inappropriately. I could go on and on.

I would like a 'blacklist' function on Audible where I can add names of narrators I never wish to hear again, so that I do not make mistakes like this again....

Frankly it's not OK, it's poor

There's a bit of fad for Scandinavian crime writers at the moment, on the back of the Girl with the Dragon Tattoo so I suppose it was inevitable that some of the less good ones would be translated and turned into audiobooks. The Hypnotist is dreadful.

It's dreadful for many reasons. First Eamonn RIley is his usual dreadful self, why do they keep using him? I will admit that he seems to be a little better than he was in the Lackberg novels, but the improvement is marginal at best. But it isn't the plodding and erratic delivery of Riley that ruins this book, it's the totally unrealistic way the characters behave.

Examples are the police keep letting this outsider make first interviews of suspects and visit crime scenes. The central character is not a copper but the author allows him to play at CSi like he is one. The characters are one dimensional and are played like automata, they come in, say their lines and disappear. The descriptions of places and events, while detailed enough, are written in such a way as to not be engaging, and frankly the drug addled doctor who is the central character should have been struck off years ago.

If you've finished the Millennium trilogy and what another fix of cool Nordic crime look elsewhere because this is rubbish. Click in the search box to the left and put in M-A-N-K-E-L-L, hit enter and you'll find some really cool Swedish crime.

What disappointed you about The Hypnotist?

It is so poorly edited , jumping back and forth from one unbelievable situation with completely unbelievable characters to another , the thread of the story is so disjointed that after three hours I'd had enough .

Would you ever listen to anything by Lars Kepler again?

I've had two other works by him but I can only assume he must have been under hypnosis himself when he produced this .

The pace was all wrong for me , he read it too fast , almost like a list that had to be finished quickly , mind , I'm not sure anyone could do much better with something that's writen in such a method acting fastion .

What character would you cut from The Hypnotist?

I'm sure the Stockholm tourist board can't have read this or they would be horrified at the thought that people might believe that this is what it's like there , half the characters are portrayed as being certifiable


I wish I had read Russ's comments before I ordered The Hypnotist. I agree 100% with him. The Characters were all over the place, one had no affinity with any of them. It was unrealistic as the hypnotist was allowed free reign to crude, moronic violence and the story went backwards and forwards so much one got lost in the self gratification of the author. As for the reader I would not read another book with him reading it. I will stick with Henning Mankell and give me Sean Barratt every time thank you very much. Bernard (Cumbria (ex Scarborough Like Russ!!!)

While I cannot say this was one of my favourite books I did have to carry on and read/listen to it. I found that it was extremely violent, too much so and the accent of the detective was irritatingly stereotypical Scandanavian!

Poor characterisation, unbelievable actions by authority figues - if this is the way that the police behave in Sweden I am glad I don't live there. Not helped by the reader.

The story was well constructed, it slowly pulled you in, there is a nice level of complexity to the story

What other book might you compare The Hypnotist to, and why?

if you like the Girl with the Dragon Tattoo and Harry Hole you will like this, it is a tried and tested formula. However, the lead character does not have the personality or depth as other characters such as Harry Hole etc.

Would you be willing to try another one of Eamonn Riley’s performances?

What a masterpiece by Lars Kepler. This audiobook has brought me into a genre of books I never thought I'd be too interested in. Crime/Thriller. After listening to the first few chapters it's safe to say I was hooked right to the finish.

Eamonn Riley reads with such enthusiasm you feel like you're the extra (invisible) character in this book. It's gripping, gruesome, gory and great.

This was not one of my favorite titles, can't recommend this. Other titles much better.

stick with it... amazing book

a winding and twisting story... ending to a great climax. ignore the reviews that say otherwise

I'd rather eat glue

It is hard to decide which is worse: the book or the terrible narrator butchering the book.

I guess what could make this a 4 or 5 star listening experience for me is if the publiisher were to include a 20 minute clip of the narrator being exposed to 500.000 Volt electrical pulses at a rate of about 4 Hz. I think the screams of pain might, somehow, help me forget wasting a credit on this book.

Not something narrated by Mr. Riley or written by "The Keplers".

I think I clarified this in an earlier comment.

If you could play editor, what scene or scenes would you have cut from The Hypnotist?

All of them. I'd cut them out and hand them over to Sonny Moore so he can mangle them into his next dubstep track.

The Hypnotist is a brilliant mystery with plenty of twists and turns which kept me wondering where the story was going to take me next. Eamonn Riley gives a great performance of the audio book and Lars Kepler are definitely a dynamic duo of mystery.

What disappointed you about The Hypnotist?

Without a doubt the narration. Lars Kepler is a writer I admire, and I expected another exciting and complex police story. But Eamonn Riley kills the story.

Would you recommend The Hypnotist to your friends? Why or why not?

No, unless it's narrated by someone else.

Would you be willing to try another one of Eamonn Riley’s performances?

I'm hoping for other audiobooks by Kepler with a different narrator.

I loved the voice chosen for Joona Linna - just for that I might re-listen to some of the book. On the other hand, I failed to really connect with the story. Somehow it felt clinical and dispassionate to me. Maybe it is because the point of view of the narration is not clearly defined, which leaves me floating while reading it. There are books the capture and engage my imagination. Where I get attached to the characters and hope the story never ends, this did unfortunately not happen with the Hypnotist. Especially the long description of Eriks sessions with hist mental patients felt rather long.