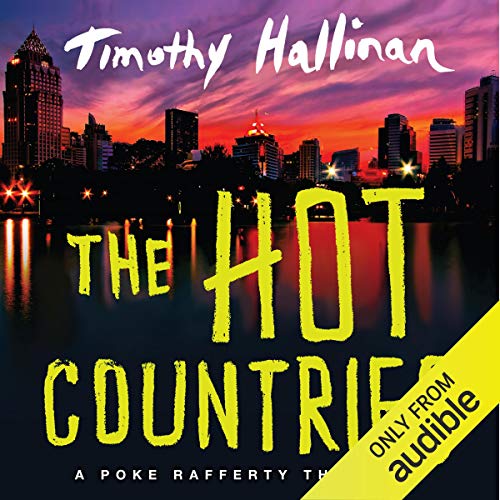 By: Timothy Hallinan
Narrated by: Victor Bevine
Try for £0.00

Back when Poke Rafferty first arrived in Bangkok to write a travel guide, some of the old-timers in the Expat Bar on Patpong Road helped him make sense of the city. Now these men - many of whom have been living in Southeast Asia since the Vietnam War - have grown old and, in some cases, frail. When a talkative stranger named Arthur Varney turns up, they accept him without suspicion, failing to see that he's actually using them to get to Poke. Varney wants two things: money Poke doesn't have and a person Poke is unwilling to hand over. It becomes apparent quite quickly that there's nothing Varney won't do to secure his goals. As his actions threaten the foundation of Poke's life in Thailand, the aging men of the Expat Bar discover that they might still be a force to reckon with.

What listeners say about The Hot Countries

Timothy Hallinan keeps getting better and better. I've been following the story of Poke et al. since picking up the first book in the series, A Nail Through The Heart by chance, not long after it came out. I am a relatively prolific reader and since then this has become my my favourite story, and Hallinan my favourite author.
The performance is excellent as well, very engaging.

I think that Tim Hallinan has finally dipped into the well of Bangkok and Poke Rafferty's life one time too many. I still love his writing, still, but the speed of the narration is so fast that it's distracting. Of course I am liking Rose's pregnancy, and the fact that Miaow is growing up into an actress, but the setting is beginning to wear on me.

The cast of characters in the bar has become stale. This new guy, Varney, is the most crushing bore ever, anywhere on earth. Why exactly Tim thinks that we should listen to this guy rant and rave on and on is a puzzle which really doesn't interest me. It's just waaay boring. Somebody should shut the guy up, right away.

Would you listen to another book narrated by Victor Bevine?

Maybe. He is going much too fast here, for reasons I don't understand. The ambience of Bangkok is now very familiar (I can feel the humidity soaking through my clothes) and the multiple plots are becoming confusing and very hard to follow. The dead guy Haskell, whose house blew up with over $3 million in fireproof suitcases: who can possibly remember what that was all about? Too much of everything.

Could you see The Hot Countries being made into a movie or a TV series? Who should the stars be?

No. Too much plot. The earlier books are more interesting in terms of movie material. There are so many good actors around that it is really too bad that there is no role for Cate Blanchett, who is by far the best actor of her generation.

Disappointing. I will likely buy the next book, purely out of loyalty to Tim, but they are getting less interesting, and the whole Junior Bender thing is just a bad idea. We are supposed to identify with and like a thief? Yuck.

Not Up With the Earlier Works in this Series

I love this series, the characters, the insights into life in Thailand, the crisp language and wit. Sad to say this story did not measure up with the earlier ones in this series. Maybe next time.

I thought it would be good

Itr was. I meeded a score card to keep all the characters. And whar a fun line up of prople. This one cost me a couple of tears as ended.

Another great Poke Rafferty mystery! I think Mr Hallinan happens to be one of the best thriller writers today!

Timothy Hallinan is a very underappreciated writer. His books on Poke Rafferty are both intersting exciting and very well written. He is a much better writer than many of those perpetually on the best seller list. Start at book one and enjoy the ride! Also he has the best narrator in Victor Bevine for his books.

Where does The Hot Countries rank among all the audiobooks you’ve listened to so far?

While I always enjoy the Poke Rafferty novels, I feel this one may be one of the best in the series as well as one of my favorites of the many books I've recently listened to. I go through a lot of books, and I'm still thinking about this one days after listening to it.

Well, I love Poke, but adore the dry humor of his friend Ardit. Poke's daughter Miaow and his wife Rose are wonderful characters, too.

I don't think anyone could do a better job- his characterization of both American Poke and the educated English accent of Thai police officer Ardit are wonderful. He has had to tackle several accents in each novel as well as pronunciations of Thai words and is impressive.

Several (no spoilers!)- I was listening at work and was afraid I'd be crying at the more emotional moments. Luckily, Tim Hallinan is able to add humor to balance it all out.

I love the Poke Rafferty novels and am still thinking about possibly listening to it again. I can't wait until the next in the series. It's a rare thing to find a great author, narrator and story all in one!