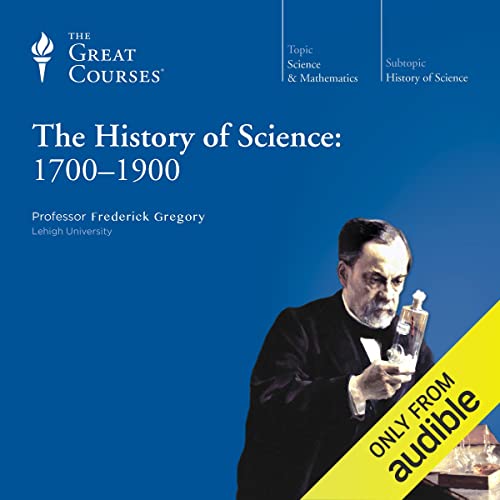 The scientific theories that were first discovered and made public in the years 1700-1900 are some of the most pivotal in history. Landmark theories of planetary motion, the workings of nature, and the speed of light were all ideas that took the world by storm.

Now you can share in that story of discovery in a series of 36 lectures designed to give you a rock-solid understanding of the great discoveries of Newton, Darwin, Franklin, Pasteur, and so many others. You’ll see clearly how these great thinkers brought their ideas into a world and a time that resisted them, gaining a new admiration for their achievements in an atmosphere where scientific advancement had to struggle against established ways of both scientific and religious thinking.

While many presentations of scientific history often neglect to consider its context - the societies and cultures in which our most influential "natural philosophers" (the term scientist didn’t exist until the mid-19th century) made their contributions - these lectures put that context in the forefront where it belongs, exploring how dynamics of time and place help determine the questions that get asked and the directions scientists pursue in response.

The result is a series that adds invaluable historical depth and dimension to your study of science. As much about history as science - and often far more so, with the focus on the climate and process of scientific discovery rather than the science itself - this course will enhance your ability to see contemporary scientific events in a vividly informed context.

As a Physicist, I loved this history of Astronomy and Science. I did think it was a little Western bias. Nothing about East Asian Chemistry or South American technical building. Although it touched on Biology, very little in the way of the history of medicine.

This isn’t an area of history I’d normally go for. But wow. The lecturer is great and the topics blew me away!

All of the Great Courses are excellent. I've done several and have enjoyed each one, but I think this was my favorite. It is 5-star in every respect. I was reluctant to finish it this afternoon and immediately checked to see if Mr Gregory does any others, and he does. I'll get to it soon. From beginning to end as I saw the brilliance and complexities of creation brought to light, I kept thinking about Proverbs 25:2 - It is the glory of GOD to conceal a matter; to search out a matter is the glory of kings.

This was a course really worth listening to. I learned a great deal about the world it off which modern science developed.

This is a really good course. The science is accessible without being dumbed down, and the wider context, particularly of religion, is very well explained. The teacher has an enthusiastic but realistic approach to his subject which made listening a pleasure. One of my favourite courses ( and I've listened to a lot!)

This is an amazing, 6-out-of-5 star course. I say this as a scientist with 20 years experience, and I say this for two main reasons.

The first is applicable to the entire course, during which you really get a sense of how gradual, even back-and-forth, certain "breakthroughs" have been and how very many minds are behind our most concise scientific maxims. In our schools we are asked to learn only the most famous of scientific names. This leads, then, to an obsession in students with fame and notoriety and a misplaced notion that science is for the exceptional. This course largely undoes those damages. Such a thorough history of science - taught after elementary science stripped of the normal too-basic history - would produce far better scientists/citizens. This is my opinion after this powerful course.

The second is dosed out in only one injection, in Lecture 24, but it is so profound it is worth calling out in review. Here, Professor Gregory considers the origins of the polarity between science and theology, and in so doing he makes the exceptionally salient point that the operands of science are not direct articles of reality ("truth") but rather models of it. To be clear, Professor Gregory presents this "Kantian coherence theory of truth" as a counterpoint to the "correspondence theory of truth", and the emphasis here is mine, but this is such a nuanced and important concept for 21st century science. Really impressed with the professor's depth of research and understanding here.

Get this course. See for yourself.

Excellent Narrative for History of Science

There is another book called "A Little History of Science" by William Bynum...only this lecture series was much longer and provided greater detail.

Which character – as performed by Professor Frederick Gregory – was your favorite?

Not sure I understand the question. He's a lecturer.

No extreme reaction, but many thought-provoking questions.

This was an excellent summary of science and highlights of major milestones in scientific discoveries throughout the 1700 & 1800's. Prof. Gregory has put together an incredible lecture series that provides the audience with an illustrative narrative that did not feel like reading through a dull history book, but instead felt like a moving story with key players.

Something unexpected was that he was able to work into his narrative the religious perspectives of nearly every philosopher and scientist that was highlighted. One key factor I gained from this presentation was how easy we tend to overlook religious and cultural differences when studying history, and I am guilty of this myself, but rarely do I ever consider the historical figure's time as it was relative to their way of thinking. As Prof. Gregory points out, we tend to apply our own prejudices and understanding on people of the past and ask why how they did or why they did not arrive at the "obvious" conclusions for areas that have since been made well known to us.

Overall, this was an incredible series on the history of science and truly covered all aspects of the major disciplines: astronomy, biology, geology, physics, medicine, etc.

Pros: the religious perspective offered with each influential scientist/philosopher
Cons: would have been interesting to keep going into the 1900's; however I recognize that for scope (and length) purposes this was not feasible.
Bottom line: a great read for anyone interested in the realm of science or anyone who as ever questioned how we ever got to our present day understanding.

My dream school would use these

It is just a small minority who are interested (or who have to study) history of physics. So this is not an audiobook for great audiences. But for people like me this is A DREAM COME TRUE. I really enjoyed this clear history in an audible form, which allowed me to listen to it where ever. I only wish I could be examined on these instead of cumbersome paper books.

Carnot process was explained in a manner which was easy to follow.

What about Professor Frederick Gregory’s performance did you like?

I like the way how he made reference to future parts or different professors lecturers.

I sure wish future "school" would better utilize these kind of learning tools.

This was a great lecture series. I could not have asked for more. Gregory provided an extremely thorough history, which was delivered in an accessible and optimally organized way. Fantastic!

An enthusiastic teacher a great storyline!!

I loved this immensely!! As a budding scientist in school, I loved hearing how a lot of what is subject in my classes came to be and how it impacted the world. I also noted that a lot of the material seems to be dedicated to the clash and turmoil at the boundry of scientific thought/ discovery and religious teaching. This boundry was exsposed at the general public level all the way down to the very inner struggles of the scientist/ natural philosopher that shown light on the subject of controversy. When and enthusiastic teacher meets one of the best storylines on earth great things happen. Five stars for sure.

An enlightened and comprehensive work

What a great ride! Sad to get to the end of this one. As a physical scientist, I was surprised and constantly challenged by the insights and wonderful themes Professor Gregory weaved throughout this wonderful tapestry of scientific history. He was an energetic lecturer who obviously loves his work. Thanks!

I wasn't sure what to expect on this course. There is an inordinate amount of content to absorb in this time period. Prof. Gregory does a great job of delving into into it and even making it interesting by cover some of the human interest aspects of the story. Especially fascinating is Prof. Gregory's incorporation of many of the religious aspects and views that were prevalent at the time. This is particularly relevant since it was a major part of the debates at the time.

I studied history and philosophy of science in college and found these lectures to be not only great refresher of lost knowledge, but learned new information from an interesting, wide perspective too.

A wonderful journey of discovery

Yes, it is so rich I think I would find fresh insights on a second listening

Have you listened to any of Professor Frederick Gregory’s other performances before? How does this one compare?

Yes, I listened to his lectures on Darwin and enjoyed them so much I immediately sought out his other lectures