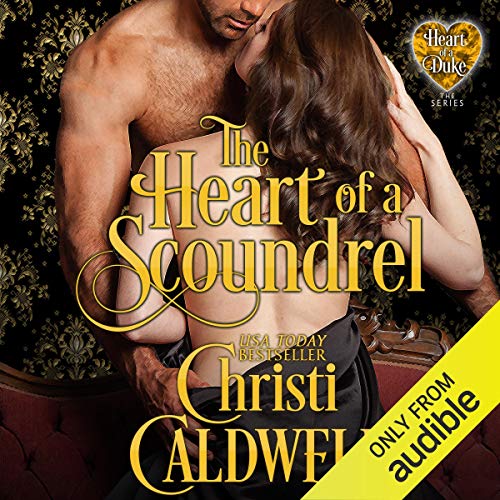 The Heart of a Scoundrel

By: Christi Caldwell
Narrated by: Tim Campbell
Try for £0.00

Ruthless, wicked, and dark, the Marquess of Rutland rouses terror in the breasts of ladies and noblemen alike. All Edmund wants in life is power. After he was publically humiliated by his one love, Lady Margaret, he vowed vengeance, using Margaret's niece as his pawn. Except he's thwarted by another more enticing target: Miss Phoebe Barrett.

Miss Phoebe Barrett knows precisely the shame she's been born to. Because her father is a shocking letch, she's learned to form her own opinions on a person's worth. After a chance meeting with the Marquess of Rutland, she is captivated by the mysterious man. He, too, is a victim of society's scorn, but the more encounters she has with Edmund, the more she knows there is powerful depth and emotion to the jaded marquess.

The lady wreaks havoc on Edmund's plans for revenge, and he finds he wants Phoebe at all costs. As she's drawn into the darkness of his world, Phoebe risks being destroyed by Edmund's ruthlessness. And Phoebe, who desires love at all costs, has to determine if she can ever truly trust the heart of a scoundrel.

"Narrator Tim Campbell gives a sizzling performance in this story of a scoundrel transformed by his love for a young woman. Campbell's English accent and rich, low tones perfectly capture the allure of the detestable and delectable Edmund, Marquess of Rutland, who plots revenge on a former lover by ruining her niece. Campbell's falsetto tones mingled with a tone of sweetness bring out Miss Phoebe Barrett's disarming gentleness, which distracts Edmund from his original plan as she becomes the new object of his desire. The nuances of societal roles are deftly conveyed through the formal tone of Edmund's butler and the restrained tones of the gentlemen. Campbell successfully brings out the lusciousness and lasciviousness of this titillating Regency romance, making for a captivating listening experience." ( AudioFile Magazine)

What listeners say about The Heart of a Scoundrel

The Duke (Marquess) Of Rutland seems to show his evil ugly face once again. As you know, if you’ve read the previous parts in this series, he’s full of anger and hate, mostly because of his mother & father, which you’ll see why. He’s here to get Lady Margaret’s humiliation out of his system, so he plans on ‘bedding’ her niece who isn’t attractive but Edmund doesn’t care, its out of revenge once again..but this time he comes across Phoebe who honestly accidentally gets in the way, but is also the daughter of one of Edmunds ‘letch who owes him money’. To get back at Phoebes father and her HORRIBLE father throwing her at Edmund is their disgusting plan!

But Edmund has met his match in Phoebe and she refuses to be afraid of him..I don’t give out spoilers‼️
This part of the series was excellent because we know Edmund through previous books, we learn more about his need to be in power, and I love how Christi Caldwell writes about Phoebes character too! In command...

Tim Campbell is the best narrator for ALL books..every time I listen to him, the ‘sensual scenes’ (and mind you there are A LOT in this one) are read perfectly...👏👏👏

So once again recommended for ALL Christi Caldwell historical fiction fans of this & any of her series of Dukes and Lords..and love the family’s of each book 5 stars ⭐️

This is the first book I've listened to on Audible. I was captivated by Tim's interpretation of my favorite characters. My favorite voice was Chester the Molester, Viscount Waters. Tim captured his voice identically to my head voice for him.

I hesitated to listen because I've always been an avid and active book reader and I didn't believe that I could enjoy passively listening to a book. Well, I've been proved wrong. Though, I am fair on the way to knowing this book by heart through multiple readings, I also immensely enjoyed listening to it on Audible.

I intend to listen many times in the future in addition to continuing to read. Christi Caldwell has found an excellent partner in Tim Campbell. His voice and interpretations are outstanding. Thank you for a wonderful evening of entertainment. Magnificent!

Such a great story!! Full of emotions and family. Another wonderful narrative by Tim Campbell. Loved it!

Narrator: Tim Campbell does a great job as usual.

Liked it. When a story keeps me captivating, makes me smile, hold my breath and brings tears to my eyes, it's a good book.

Was just getting into this story when the download stopped mid way in Chapter 9. How does one report this faulty download so as not lose a credit?

Enjoy the narrator! The story was good but did not tug at me when it was about over. The sensual parts were ok.

This is a story of two people who had their hearts broken as children by their parents and did not believe in love but it found them anyway.This was a good book.

Waited for Rutland's Sorry & It Did Not Disappoint

The story was well put together & the characters were engaging. While Phoebe's father was a disgusting letch, I was so happy to see she had a sweet, loving, & non-judgmental family, including her kind-hearted mama - something we haven't seen too much among the Ton's title grasping matriarchs in the previous books. During Anne & Harry's story, we managed to get a brief glimpse of what hinted to something sad & broken withiin Rutland & knew there had to be a story there that would lead to his redemption & ultimate deliverance. Their story did not disappoint. I've said it before & I'm sure I'll say it many more times, Tim Campbell can read the yellow pages (when there were yellow pages, lol) & make it sound amazing; Give him a great story & he's a master!

whenever I read a book about a bad guy he's not really bad, just misunderstood. this guy is bad news. It's great in having someone so messed up they spread it. He was lucky to get this girl. If she was less optimistic it could have been a tragedy. I gave it 4 stars because her emotions were all over the place. she gave him way too much credit and blamed him for too much. It was I her character so I understand, but critical thinking is important young lady. She was lucky too.

Finally a story that doesnt goon and on just to fill space like the first 4 of this series.