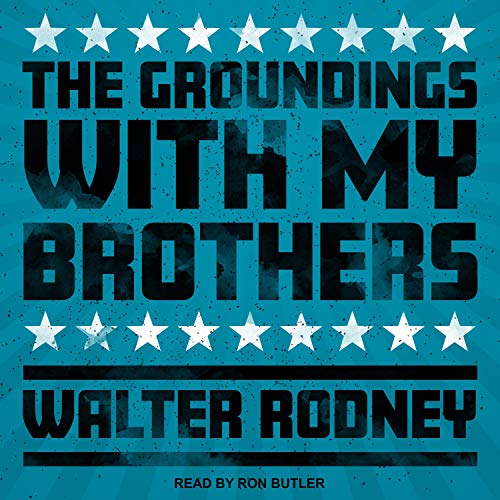 The Groundings with My Brothers

By: Walter Rodney
Narrated by: Ron Butler
Try for £0.00

"I have sat on a little oil drum, rusty and in the midst of garbage, and some black brothers and I have grounded together." (Walter Rodney)

In his short life, the Guyanese intellectual Walter Rodney emerged as one of the leading thinkers and activists of the anticolonial revolution, leading movements in North America, South America, the African continent, and the Caribbean. In each locale, Rodney found himself a lightning rod for working class Black Power. His deportation catalyzed 20th century Jamaica's most significant rebellion, the 1968 Rodney riots, and his scholarship trained a generation how to think politics at an international scale. In 1980, shortly after founding of the Working People's Alliance in Guyana, the 38-year-old Rodney would be assassinated.

In this classic work published in the heady days of international Black power, Groundings with My Brothers details the global circulation of emancipatory ideas, but also offers first-hand reports of Rodney's mass movement organizing. Introduced and contextualized by leading Caribbean scholar-activists, this updated edition brings Rodney's legacy to a new generation of radicals.

What listeners say about The Groundings with My Brothers

I struggled with the names and the depth of information but after a second read, I learned myself.

I’m amazed that Mr. Rodney was not publicized here in America. But, then again I’m not. He was such a young activist with the visionary gifts of the old. He sacrificed his life to bring awareness to the menacing deprecation of racism and what we must do to fight it while acknowledging and maintaining our own sense of self and purpose. His life’s mission begs the question, “What kind of humans do we really live among who are so guided by superiority and hate, that there are no limits to the depths of horror, derision, or sinister behavior they will go to maintain their false sense of superiority? It is really savagery.” This book is a must read for any educator. It should inspire all of us to be better humans and recognize our responsibility to make this a better world.

The truth shall make you free

The author, who is a West Indian college professor explains the consequences of British colonization. An awesome history lesson about the liberation and oppression of the body and minds of Jamaica's African population. Also, a fascinating condensed summary of various African cultures. it is unfortunate that he was assassinated.

The essays at the start and end of the book give great context for Walter Rodney's work and significance. Ron Butler does an excellent job of narrating history and theory in a manner that balances the academic, the polemical and conversational layers of the text.

50 years later and the fight continues

As evidenced in the capitalist world, the black peoples continue to be subjugated for the benefit of the white neo-colonialists. This book, written so many years ago is a refreshing reminder that as long as neo-colonial capitalism exists, the status quo shall remain.