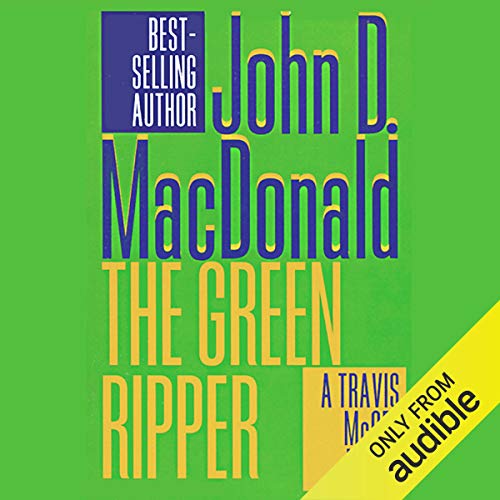 By: John D. MacDonald
Narrated by: Robert Petkoff
Try for £0.00

Beautiful girls always grace the Florida beaches; strolling, sailing, relaxing at the many parties on Travis McGee's houseboat, The Busted Flush. McGee was too smart - and had been around too long - for many of them to touch his heart. Now, however, there was Gretel. She had discovered the key to McGee - to all of him - and now he had something to hope for. Then, terribly, unexpectedly, she was dead. From a mysterious illness, or so they said. But McGee knew the truth; that Gretel had been murdered. And now he was out for blood.

What listeners say about The Green Ripper

The best one so far!

A great story..Typical of JDM..

Brought to life by vivid narration. Difficult to put down..Am looking forward to the next..

Gretchen is dead; so the love of McGee's life has just been killed, again. This is the fourth and last good-bye in the McGee falls in love and the woman falls dead genre. So Gretel joins Lois Atkinson (book 1) Nora Gardino (book 5) Puss Killian (book 8) as a member of the "fall for McGee, fall dead cub". The only lead McGee has as to who Gretel's killers might be is a story she told him the night before her death. She and her ex-husband had gone to search for his sister. Outside the town of Ukiah, in rural Northern California they found her in a cult. So with this information McGee steps out of his life and goes hunting; he 's determined that someone will pay.
As it turns out he accidentally stumbles upon the violent side of a left-wing revolutionary group. The cult is planning on an incipient beginning of the revolution and are in training to fire the first shot; so to speak. McGee takes on a new identity as he plots his revenge. I'll stop there so as not to spoil the ending. This is one of my least favorite Travis McGee novels; it is also quite a departure from the other books in the series but all McGee stories are worth the time and the credit. As always when it comes to the writings of John D. MacDonald, I recommend it.

Yes, because it is part of the evolution of Travis and hi associated characters.

What was one of the most memorable moments of The Green Ripper?

Have you listened to any of Robert Petkoff’s other performances before? How does this one compare?

This one pulls out all the stops. You've never seen Travis like this, but you always knew he had it in him. This one kind of picks up where the previous one, “The Empty Copper Sea” left off, so make sure you have read that one first. This one really changes things for Travis. There are only three more novels left, and it looks like Travis is moving into the modern age of terrorism we all live with today. Savor this one, only three more to go….

If you’re not a Travis McGee fan, move on. This is NOT the place to start.

If you read one Travis McGee, or two, or three, and decided to try another, move on. You have plenty left.

If you’re a die-hard fan, then the first eight chapters and the epilogue are worth listening to. But others have done terrorist cells (Le Carre’s The Little Drummer Girl comes to mind) and the concluding chapters are leaden. All you need to know is that McGee is back in the mold or the perennial bachelor.

Note: the spectator has a good article ~2004 (but still online) about the last five books called iirc “The Long Goodbye”

one of my favorites in the series, Travis never disappoints . look forward to the next.

Too Close to Home

I love this series! I've bought all the books. As always the narrator is perfection! But be ready this book is triggering if you are sensitive to terrorist stories. I couldn't finish this story because it is too close to what we are all seeing in the world today.

This is one of my favorite "Travis McGee " novels. Mr. Macdonald did a magnificent job writing this and Mr. Petkoff is a great narrator!

I got lost in this story and couldn't put it down , but I have listened to many Travis McGee books. If you are new to this series I recommend starting with some earlier ones. I'm not sure I would have enjoyed this one as much if I didn't already feel like I knew Travis McGee.

A premonition off the terrorism that has focused the worlds attention for the last couple of decades. Travis talks about luck and demonstrates skill. Perhaps the morose thoughts Travis exhibits reflect MacDonald’s own aging. I now know the area around Ukiah and L lake city, I didn’t when I read this when it first came out. A pleasure to revisit the story, Travis, and Meyer.

read this 20 years ago...
McDonald has a sweet style, easy to see everything unfold...