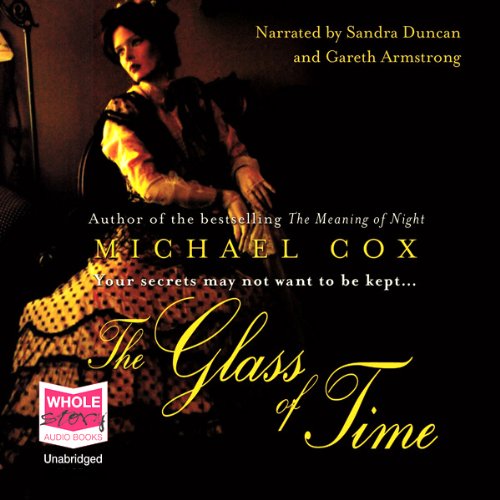 The Glass of Time

By: Michael Cox
Narrated by: Multiple Narrators
Try for £0.00

It is 1876. Nineteen-year-old orphan Esperanza Gorst arrives at the great country house of Evenwood to be interviewed for the position of Lady's Maid by the 26th Baroness Tansor, the former Miss Emily Carteret.

But Esperanza is no ordinary servant. She has been sent by her guardian, the mysterious Madame de l'Orme, to uncover the dark and dangerous secrets that her new mistress has sought to conceal, and to set right a past injustice in which Esperanza's own closest interests are bound up.

Gradually those secrets are revealed, and with them the truth of who Esperanza really is, forcing agonising obligations on her, and enmeshing her in a complicated web of intrigue, deceit and murder that culminates in betrayal by those she trusted most.

What listeners say about The Glass of Time

A book I really could not stop listening to. At several times you felt the conclusion to the story had been reached and there would be yet another twist and turn to keep you on your seats edge. I was not aware until I searched for more of Michael Cox's books that this is a sequel to his first book which will now have to serve as a prequel. Enjoy!

the glass of time

i thought michael cox's first book was good , but this in many ways is even better. I think the descriptive language adds to a plot with many unexpected twists , and was sorry to learn that no more books from this author would be forthcoming , due to his untimely death.

What a joy it was to listen to this audiobook, I found myself unable to switch off, sometimes keeping me up until after 2am, fantastic plot with all the components necessary to make a very good story. Such a shame that there will be no more words from the pen of Mr Cox.

Having listened to the Meaning of Night, I very quickly came back to download this book, having enjoyed the former so much. I wasn't sure if this would be so good, as I'm aware that the first book was almost 30 years in the planning. I need not have worried. I didn't believe I have ever been so engaged or enthralled by any character as I was by Esperanza Alice Gorst, and the twists and turns of her life.

Even though some of the outcomes were clear early on, Cox always threw in a twist when you least expected it, and one that was hard to foresee. The beauty of his writing further aided the story, and restrained nature of the conversations was so authentically Victorian, and had me yearning for the characters to break free!

Michael Cox's output may have been small before his sad death, but is perfectly formed. His story was an interesting one in itself, and if you haven't already listened to The Meaning of Night, and the interview with the author which comes at the end, I'd strongly recommend it.

This is a most beautifully written and narrated historical novel written by Michael Cox. I found myself continuously intriqued, wondering constantly what would happen next and if I was correct in my assumptions of how the story would progress.I listened to "the meaning of night" first by the same author and this gives the background "to the glass of time" and I found the two books together well worth reading and I can recomend them heartidly. I will definately listen to them again
Sadly there will be no more titles by this author for which I am truly sad, but I am grateful to audible for bringing my attention to the book which I probably wouldnt have listened to if I hadnt taken the time to read the preview

A truly masterful sequel to The Meaning of Night. Although I found the plot quite predictable, as I believe anyone who has read The Glass of Time’s predecessor would, I thoroughly enjoyed both the narration and the originality of the story, which was full of twists and turns. An extremely atmospheric and well researched novel and I would heartily recommend it to all fans of the genre.

Superb listening experience - I did not want it to end.

I would give this book six stars if I could. Beautifully written and narrated, I felt bereft when it ended. I doubt I will find it’s equal again.

Just don't lose track of who's who!

Beautifully written, and read. Could have been 20% shorter without losing any of the impact. Full of twists and turns - most of which weren't predictable. But I must say, I struggled at times to remember who was who, as a zoned out a few times. Overall, glad I stuck with it.

I thoroughly enjoyed this book. It is well put together and well read. The author has recreated the era to perfection. I little predictable in places, but well worth reading. Highly recommended.