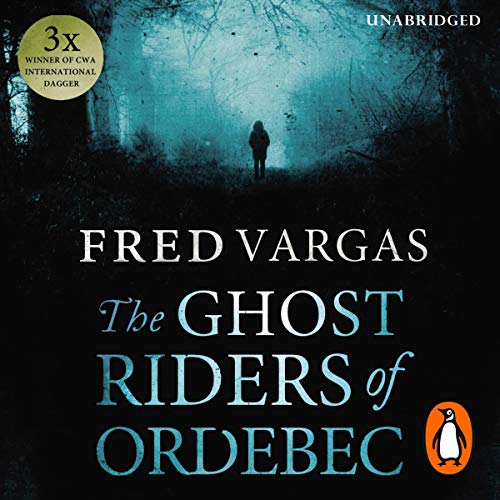 The Ghost Riders of Ordebec

By: Fred Vargas
Narrated by: David Rintoul
Try for £0.00

"People will die," says the panic-stricken woman outside police headquarters. She has been standing in blazing sunshine for more than an hour, and refuses to speak to anyone besides Commissaire Adamsberg. Her daughter has seen a vision: ghostly horsemen who target the most nefarious characters in Normandy. Since the middle ages there have been stories of murderers, rapists, those with serious crimes on their conscience, meeting a grizzly end following a visitation by the riders.

Soon after the young woman’s vision a notoriously cruel man disappears, and the local police dismiss the matter as superstition. Although the case is far outside his jurisdiction, Adamsberg agrees to investigate the strange happenings in a village terrorised by wild rumours and ancient feuds.

What listeners say about The Ghost Riders of Ordebec

A delight to read

This is the second Fred Vargas I've read and I hope the other Commissaire Adamsberg books are put on audio soon. David Rintoul is a great narrator.The characters are interesting and engaging. It's different and quirky so I struggle to compare this author with anyone else. The plot was intriguing, two main story lines both of which were interesting. No loose ends on completion of the book. A delightful book which I can recommend.

Adamsburg and his team look into the ghost story of a small Normandy village with its small community and secrets. An interesting tale with a slightly claustrophobic atmosphere of families whose secrets and feuds stretch back generations.

Excellent narrator and despite the slightly incomprehensible and eccentric Adamsburg it is a well-told credible story.

Adamsburg is one of the greats!

Would you consider the audio edition of The Ghost Riders of Ordebec to be better than the print version?

I haven't read it, but David Rintoul is a brilliant narrator, so I think he brings something extra to the novel. He really brings Adamsberg alive for me. Narrates his character just how I imagine him to be

What does David Rintoul bring to the story that you wouldn’t experience if you had only read the book?

He may not do accents, nut I don't think he needs them. He reads very well, and just the tone, pitch and pace of the characters brings them alive. I can really picture the characters and scenes in my head as he reads

brilliant entertaining read with lots of circumlocutionary thoughts and talks which was a joy !the French do it differently. (fred vargas is a French author ) . enjoyable story and memorable characters

Enjoyable story, although I struggled to keep some of the character names straight in my head as there was a lot to remember. Not all characters were distinct/memorable. I'm not entirely convinced by the unveiling of the killer at the end but I'd happily read/listen to more by this author.

People who enjoy bizarre, ambling scripts with characters you can't empathise with

What was most disappointing about Fred Vargas’s story?

Who might you have cast as narrator instead of David Rintoul?

This is the only audiobook I have ever failed to finish. I persevered for 2 thirds of it and just couldn't take any more. It really felt like it had been translated from French to English and no concession had been made to the idiosyncrasies of the two languages.

What a load of drivel

What disappointed you about The Ghost Riders of Ordebec?

Do not buy this audiobook. I've no idea how it shared the Crime Writers Association foreign novel award. The story is the most misconstrued rubbish, the translation was terrible and the delivery totally flat.

What was most disappointing about Fred Vargas’s story?

I understand you can't just have a detective story - without the lead detective having some peculiar trait. They're either a bobby with a hobby or they're either alcoholics or widowers after a dreadful crime or gamblers or failed cooks but in this story all of his bloody crew had some terrible trait that the author insists on expanding on at length, whether they were trivia geniuses, bulimia sufferers, experts on fish. Fish, FFS!!! Do me a favour!

Who might you have cast as narrator instead of David Rintoul?

There is no saving this book.

Maybe, but I couldn't finish it. Honestly, I've always been able to finish a book until now, even if I'd lost interest in the story or characters or author. But this was too bad.

The furious army will get you!

my first Fred Vargas, and I wasn't disappointed. Kind of like a French inspector Montalbano. All the detectives characters are conjured up well. The plot and humour both excellent. David Rintoul is one of the finest narrators

Well narrated, but struggled to keep up with who was who, needed a bit of concentration, but well worth the effort. Great storyline.

could not finish. poor performance. can't follow the story with the accent of the narrator. boring .it is meant to be a thriller not a BBC radio show.

Love the well-written weirdness of Vargas

If you could sum up The Ghost Riders of Ordebec in three words, what would they be?

Vargas always gets me in the end. Although I'm rather astute at guessing who did it, I never quite get it right with Vargas--there's always a twist that catches me unawares. I can't recommend her books highly enough.