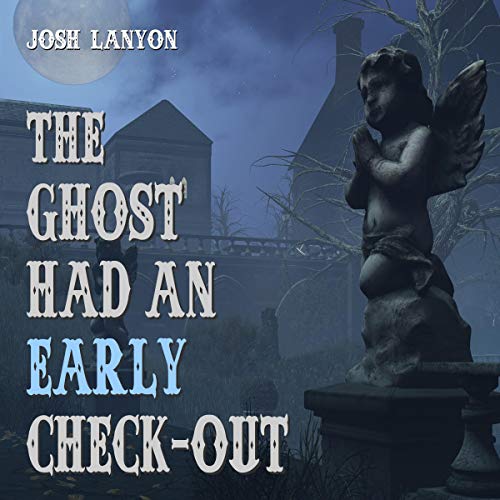 The Ghost Had an Early Check-Out

By: Josh Lanyon
Narrated by: Michael Pauley
Try for £0.00

To live and draw in LA

Now living in Los Angeles with former Navy SEAL Nick Reno, artist Perry Foster comes to the rescue of elderly and eccentric Horace Daly, the legendary film star of such horror classics as Why Won’t You Die, My Darling?

Horace owns the famous but now run-down Hollywood hotel Angels Rest, rumored to be haunted. But as far as Perry can tell, the scariest thing about Angels Rest is the cast of crazy tenants - one of whom seems determined to bring down the final curtain on Horace and anyone else who gets in the way.

What listeners say about The Ghost Had an Early Check-Out

Narrator ruined it for me.

I was so disappointed this book didn't have the same narrator as book one. The story was great but I was so distracted by the horrible voice of the narrator. He sounds like he's selling toothpaste and his Perry voice is AWFUL. Josh Lanyon usually has such great narrators I don't know what happened here.I was so looking forward to this audiobook but I'm tempted to return it strictly because the narration was just plain horrible. Story was wonderful but I think I'll just read the book so I don't have to listen to this guy.

Interesting story but not the narration.

The story was intriguing and interesting but the narration was forced and distracting. I’ve returned previous books by the narrator but won’t this time because it’s a Lanyon. I couldn’t even tell you what the story was about because the reader was so breathy-and not in a good way. Very disappointed.

Michael Pauley is terrible. The story is fun.

These books, The Ghost Wore Yellow Socks, and The Ghost Had an Early Check-Out, are in my top 10 Audibles, for romance, for mystery and for narration! Since I have 230+ titles in my Library, plus the hundreds I read through Escape, that says something. I love Perry and Nick and how their relationship developed. If there were more Nick and Perry books, I’d read them without delay. These books are keepers, and will be regular re-reads.

It’s Halloween and Perry and (a very reluctant) Nick is spending it at the haunted Angels Rest hotel. The eccentric owner is convinced someone has tried to kill him every Halloween for the past few years and has convinced Perry to investigate. Perry and Nick are sceptic, but then things starts happening. Some that can be explained away by the old and run-down building, but some are more sinister. And maybe there is something to the old man’s claims after all.

This book was without a doubt entertaining and it was nice to see Nick and Perry again, to see how they fared. Not much have happened or changed since then, but it was still nice to re-visit. This book, just like the first, was mostly focused on the mystery, but I loved the sweet moments between the guys. And just like with the first book, I loved the sense of place Lanyon created. That haunted and creepy feeling was still there and it made it all a better listen.

One of my favourite parts of this book was the pet alligator. The very much alive alligator – intent on breaking into one of the apartments, and possibly have one of the tenants for a snack. Which unfailingly brings me to; who in their right mind want to live in the same house as an unfriendly alligator?? That being said it was entertaining (for me) and it for sure was different.

I’m a big fan of Michael Pauley’s, you probably know that by now. Unfortunately I’m not a fan of switching narrator in the middle of a series, especially a series following the same couple. Well, at least not when I enjoyed the first narrator, and I did enjoy Miller’s interpretation. So before even starting Pauley had a huge disadvantage. But ignoring that and focusing only on the narration of this book he did do a great job portraying the characters and the plot. Nick’s overprotectiveness rang so clear at every hint of even the slightest danger to Perry. But so did the love and connection between them.

The Ghost Had an Early Check-Out had the same feel as many of Lanyon’s mystery novels. So in that sense it doesn’t surprise or bring anything new. But you know what? I love a great murder mystery so please keep them coming.

A copy of this book was generously provided by the author in exchange for an honest review for Love Bytes.

was worth the wait for sure. mystery, colorful characters and a spooky building.
narrator did a wonderful job

I really liked the first book of the series, both the story and the performance. This audiobook, though , isn’t so enjoyable. The narrator has a nasty way of reading most of the sentences as questions-extremely annoying!!

This was one of those rare mysteries that I had no clue who was responsible till the very end. Well played Josh Lanyon. Well played....