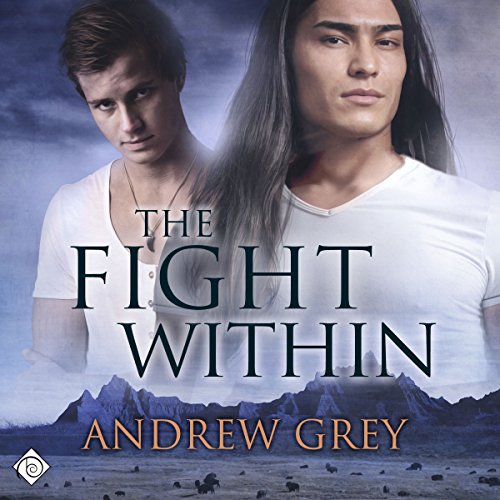 By: Andrew Grey
Narrated by: Andrew McFerrin
Try for £0.00

A Book in the Good Fight Series

Bryce Morton needs a change of scenery. Since his partner's death a year ago, he's become withdrawn and quiet, so his friends, Jerry Lincoln and Akecheta (John) Black Raven, convince him to go camping with them on a Sioux reservation. Though he's not immediately sure he's done the right thing, Bryce becomes more interested when he meets Paytah, the man who owns the reservation's trading post.

Paytah Stillwater's life is filled with hurt, and sometimes the only thing he has left is pride. After being abused as a child and disbelieved when he spoke up, he has withdrawn into himself-but he can never truly put his past behind him, because the source of his pain still lives on the reservation. Paytah is proud of his heritage and careful with his heart, but when Bryce commits a selfless act of kindness for one of the reservation's children, the walls around Paytah's heart begin to melt.

Bryce and Paytah each fight the pain within them. When Paytah's abuser sets his sights on one of the reservation youngsters, Bryce and Paytah must set their individual fights aside. Finding a way to stop the abuser unites them to fight their way forward-together.

What listeners say about The Fight Within

I have enjoyed this series so much. The narrator was awesome. The Native American story means something to me because I was married to a Native American.

Good Addition to a Good Series

This is not a spoiler, Bryce’s Percy dies in the first pages of this book, while Bryce is planning the wedding! Bryce is crushed, starts to recover, and travels with Jerry and John up to the reservation to go camping.
At the reservation he meets the grumpy Paytah and though at first they squabble, they later turn into friends, then more.
While knocking down Paytah’s grumpy walls, Bryce uncovers Paytah’s childhood of abuse. He calls in for reinforcements to help Paytah deal with his past and together they uncover even more abuse.
Though Paytah and Bryce are getting closer, the hurdle of where to live still remains, and what to do with their newfound love.
Andrew Grey does an excellent job of discussin some very difficult subjects in this book. Child abuse. Alcoholism. Racism. Poverty. Death. All in all, there was a lot of tough stuff to get through for these guys. Because of these difficult subjects, I think it was good that Bryce was so light hearted (most of the time) and optimistic. It would have been difficult to have both MCs full of angst and dealing with all those dark subjects.
I also appreciated the delicacy with which Andrew handles the challenges faced by the Sioux in this story. I think he really shows how difficult their situation is, trying to remain true to their heritage while not subjecting others to the racism they themselves face. I thought the Andrew Jackson story was great! I’ll never look at a twenty-dollar bill the same way!
I didn’t like this book as well as book one, mostly because I didn’t feel the connection between Paytah and Bryce as authentically as I did John and Jerry. Maybe it was Percy. Maybe it was because Paytah did such a fast 180 from grump to boyfriend. Maybe because the relationship moved through some pretty difficult subjects – partner death, childhood abuse, racism – pretty quickly. I’m not sure. But, I just didn’t click with them like I did the other MCs.
I still really enjoyed the look into the Sioux culture and appreciate the daunting task of tackling all those difficult subjects in one book and thought it was a good addition to the series.
I would definitely recommend reading this if you enjoyed the first book – we get to see more of John and Jerry and their family on the reservation, if nothing else.
3 of 5 stars
Audio:
Andrew McFerrin does another great job with the narration. He really does a nice job with the subtle accents for the native americans in the story and I really like how he interprets Bryce.
4 of 5 stars
Overall Impression:

What started out as truly heartbreaking and seemed like it would not end turned into a story of renewal.

Andrew Grey it a great author. I have read all his books and this one did not disappoint. Can't wait for the next one.

could have been better

this book didn't grab me like I wanted it to. It seemed to be too many things at once. the tribe was struggling there was along going issue that everyone seemed to turn their a blind eye on
it seemed a bit far fetched (I am not saying it can't and does not happen). the narrator was spot on but that can't save a book that not very enjoyable.