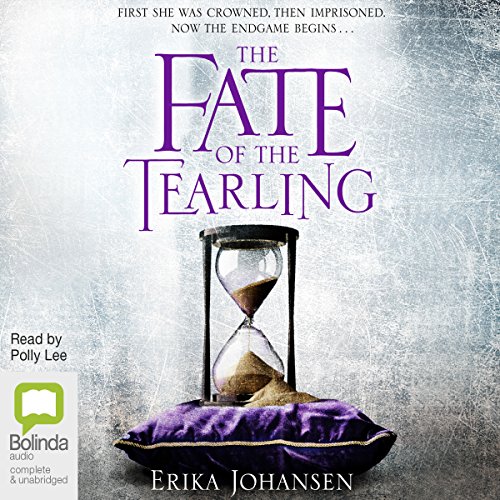 The Fate of the Tearling

By: Erika Johansen
Narrated by: Polly Lee
Try for £0.00

In less than a year, Kelsea Glynn has transformed from a gawky teenager into a powerful monarch. As she has come into her own as the Queen of the Tearling, the headstrong, visionary leader has also transformed her realm. In her quest to end corruption and restore justice, she has made many enemies - including the evil Red Queen, her fiercest rival, who has set her armies against the Tear.

To protect her people from a devastating invasion, Kelsea did the unthinkable - she gave herself and her magical sapphires to her enemy - and named the Mace, the trusted head of her personal guards, regent in her place. But the Mace will not rest until he and his men rescue their sovereign, imprisoned in Mortmesne.

Now, as the suspenseful endgame begins, the fate of Queen Kelsea - and the Tearling itself - will finally be revealed.

"Intoxicating...Thrilling and thought-provoking." ( Buzzfeed)
"This is a thrilling conclusion to a fantastic trilogy...Johansen’s fans will be pleased." ( Booklist)
"Katniss Everdeen, you have competition." ( Entertainment Weekly)

What listeners say about The Fate of the Tearling

If you could sum up The Fate of the Tearling in three words, what would they be?

The Mace. I don't feel like the author really allowed us to get that close to anyone other than him and Kelsea and she was just a bit of a nightmare sometimes. Although absolutely terrifying you could sense he acted out of kindness and love, not stupidity and rashness like Kelsea

Would you be willing to try another one of Polly Lee’s performances?

No. The other two books had great narrators that I gave 5 stars for but Polly Lee's voices for some of the male characters were ridiculous, and some of the voices for the women were too simpery

'When the end comes, prepare for disappointment'

I had such high hopes and gave great reviews for the first two books but this book just went completely downhill in the last half. It had such potential for a great, heartwarming, lifting ending but it was not only a massive anticlimax, but depressing, and I suppose whilst the ending was what Kelsea was ultimately supposed to do to 'do the right thing for her people', it was demoralising and distressing to find her in the situation she was in. I thought it cruel that she must *SPOILER* not only bump into Carlin, Pen, Mace and Father Tyler but not a single one recognise her - even if the last line was just a hint of a comment from one character and it left you infuriatingly hanging would have been better than her standing watching Pen go off to another woman or Mace look right through her. I also feel the author must be inexperienced or new, because there were many plot holes and unexplained answers for me that I will never have explained. I also kinda felt throughout the whole book the author just wrote the whole thing just to take repeated digs at religion, which whilst not wholly religious myself I still found tiring after a while. In short, all 3 audiobooks were 52hours and 40minutes in total and I feel like after investing so long in listening to them all that I was completely cheated out of a fulfilling tale right at the end.

4.5 stars
I loved this series, my favourite book for the story and the narrator was the Invasion of the Tearling, but this book was a close second. Such a fantastic climax to the series and you really empathise with all of the characters, and the way information is revealed is really exciting but still feels natural. I think this series has been one of my favourite reads/listens ever, highly recommend.

Great story, narrator could be better

I loved this series, however it was a little annoying how each book in the trilogy had a different narrator.
The first two narrators I thought were fantastic, and the 2nd narrator seemed to try and match voices and accents that the first narrator had created for characters.
The 3rd narrator however, did not do a good of a job at this, and at first some of the voices she did for characters were a bit jarring, as they didn't match the characters I had developed in my mind.
By the end of the book I had gotten used to it, but still, it could have been narrated better.

For a trilogy that started off so well never have I been so let down! The first book in the series was fast paced and compelling and I was unable to stop listening. I couldn’t wait to start the second book! What a let down it was. Boring, dragged out and completely devoid of emotion. Surely the last book had to bring the series back? Wrong again. What a complete and utter disappointment! It also isn’t helped that there is a different narrator for each book who voices the characters completely different for each book! Just as you build the image of the character it is completely changed and I’m sorry but this third instalment the voicing was just way out and almost so bad I couldn’t listen to it!if there is going to be different narrators they should at least research how each character was developed by the first narrator! The narration itself isn’t bad just the characterisation is way off. Such a pity because the first book was fantastic. How can volumes 2 and 3 be so drastically removed from the first instalment? Beyond me......

The first two books are great, yet such a disappointing ending. I cannot decide whether the author ran out of ideas, or just decided to be cruel. The change of narrator and character voices is somewhat annoying too.

I don't understand why the narrator was changed for every book in this trilogy. This last one ruins it. Accents have changed. Heros have weird nasally voices or a completely flat monotone. Ruined the book for me.

I wouldn't have guessed that ending, really enjoyed every minute. it's well worth a listen

Not enamoured by the third reading.

Enjoyed the first two books enormously, had I not checked the narrator after starting the third book I would have said the same person continued from the first to the second, but the reader of the last book completely changed the characters voices and was so droll , I really hated listening to the third book but I wanted to finish the series.
Excellent books,excellent narrators for the first two books but a thumbs down for the third reader, whoever was in charge of the continuation could have , should have made a better choice or at least aimed for a similar reading.

OK book with regards to storyline etc, though I felt it was incredibly rushed towards the end.

Also had to contend with, and get used to a different person reading than with book 1 or book 2. (which both have different readers!). It's quite frustrating having to try to get used to another person, who does accents and voice timbres completely differently!! Grrr 😡 😡

What can I say, it’s an amazing trilogy and if you haven’t read it yet then your doing yourself an injustice.

Most suspenseful book in the series. Loved this series...the issues it tackles and the story are both fantastic. i just finished this series and am amazed by its scope! Well written by an author who clearly respects her fellow writers (especially classics both past and present)