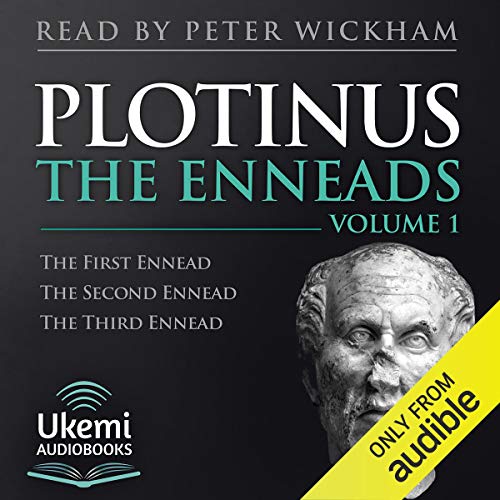 By: Plotinus,Stephen McKenna - translator
Narrated by: Peter Wickham
Try for £0.00

Plotinus (204/5 -270 CE), born in Lycopolis, Egypt, when it was part of the Roman Empire, was a major figure in the philosophical school later called Neoplatonism. Neoplatonists viewed reality as deriving from a single force or figure expressed as 'the One'. Two further concepts from Plotinus, 'the Intellect' and 'the Soul', are also principal features of his philosophy. These proposals led to the work of Plotinus forming a bridge between Plato and the monotheistic religions of Christianity, Judaism, and Islam as well as Gnosticism.

Yet Plotinus, who spoke Greek, did not actually leave a written legacy of his ideas. His work was written down and compiled by a pupil, Porphyry of Tyre (c234-c305 CE). Porphyry presented Plotinus' work in six 'Enneads', each containing nine 'Tractates' - (ennea = 'nine' in Greek), amounting to 54 treatises in all. They were originally arranged into three volumes, but in this Ukemi recording they are divided into two equal parts. The first three Enneads contained in this recording are prefaced by the fascinating biography written by Porphyry, who describes Plotinus as a highly singular figure - he declined to sit for a painter or sculptor, he wouldn't eat meat from animals reared for the table, and he 'caught philosophy at the age of 20'.

The First Tractate of the First Ennead opens with 'The Animate and the Man'; subjects of other tractates include 'On Virtue', 'On True Happiness', and 'On the Primal Good and Secondary Forms of Good'. The Second Ennead opens with 'On the Cosmos or the Heavenly System' and continues with 'The Heavenly Circuit' and 'Are the Stars Causes?' The Third Ennead opens with 'Fate' and continues with two essays: 'On Providence' and then 'Our Tutelary Spirit'. Peter Wickham, in this first audiobook recording of the Enneads, presents Plotinus in a clear and steady manner.

What listeners say about The Enneads Volume 1 (1-3)

This This book is probably best read (with a dictionary to hand) than heard, due to its use of complex sentences constructed almost entirely of ‘big-words’ with multi layered meanings, throughout. Furthermore, the complexity of the enneads increases incrementally, so the works only get more difficult to comprehend. As such, these works will need multiple listens to grasp even a portion of the concepts being discussed, but even so, you gain insights along the way.

The level of difficulty and complexity involved in the concepts, and the use of complicated sentence construction highlights how much more intelligent Plotinus was then, than the majority are today. I’ve read quite a few classics and this one doesn’t disappoint, just know that it’s not easy. However, I’m a believer that sometimes you have to go further back in time to read up on topics like those discussed here, than more modern versions, as the modern works are mostly dumbed down, whereas the classics are pure. Sure, time and science will altar some aspects of discussion, but not all, and all can be taken into account.

very interesting philosophy. The ready makes it very good to listen to. thank you

Plotinus is perhaps the most important figure in the history of neoplatonism, the translation by Stephen McKenna is good and although it is now being challenged by Lloyd Gerson it is an extremely good listen and works well on audiobook

An Exemplar for Spirituality

The being that knows itself is the good. The good is the authentic. Contemplation of the divine is our highest good. Those three sentences can be found within this book or within Thomas Aquinas. I’ve read how influential Plotinus was but I never understood what they really meant by that until I read these three volumes.

Parmenides’ One leads to Einstein’s block universe, a universe without time except thru illusion (at least Karl Popper will say that). Henri Bergson wants to keep time within the universe and Plotinus does too while reworking The One, the primal cause, the cause before any cause into a coherent and consistent system. This is why the modern day Bergson was influenced by the ancient Plotinus. They both understood (or more properly believed) that time is entwined with the physical. The General Theory of Relativity sees the universe as a whole and all at once continuously while quantum physics sees the world discreetly; Einstein never accepted quantum physics and would mock ‘spooky action at a distance’ which turned out to be real and is called entanglement today.

Plotinus is not a scientist by any means, but he did understand the problems with time being immanent or emergent, and he definitely makes a statement equivalent to the conservation of mass. Plotinus is mostly antithetical to my most favorite of all other ancient books, ‘On the Nature of Things’. One can tell that Plotinus is intimately familiar with that book and he quotes frequently from the Epicureans in order to refute them. Plotinus gives freedom through the will because of the attachment of the soul from the divine to the body while the epicureans will hypothesize a ‘swerve’ at the last moment, and the stoics will just say ‘go with the flow’ (Plotinus is definitely not a stoic or a Gnostic).

These works of Plotinus are the ultimate work of spirituality. Every modern book just seems to be a poor imitation of these works. Plotinus will mix the Eastern with Platonic thought and develops a non contradictory take on the world that delves into being, time, reality and the essences of nature, and at other times will show that our anxiety over nothing (what Kierkegaard refers to as ‘despair’) is really about nothing worthwhile.

Plotinus presents the pinnacle of classical western philosophy. His worldview is inclusive yet rigorous. It includes many of the same great principles of Eastern philosophy. Although the reader does not sound authentic, he presents well enough.