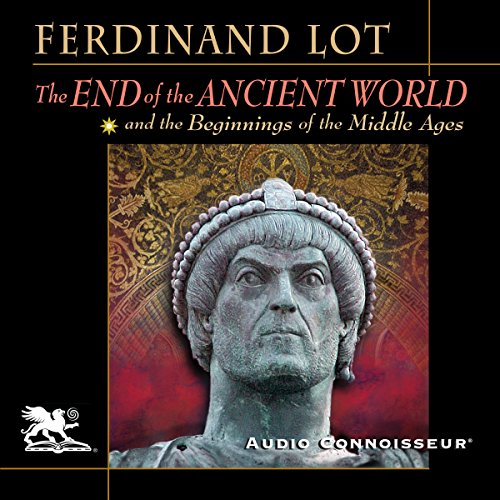 By: Ferdinand Lot
Narrated by: Charlton Griffin
Try for £0.00

Ferdinand Lot (1866-1952) was one of the great historians of his generation, and the transition from Roman to Medieval civilization was a process that fascinated him most of his life. Rather than placing the emphasis for Rome’s fall on purely political or military reasons, Lot put forth multiple explanations for the birth of the Middle Ages which embrace not only politics and war, but linguistic, geographic, cultural, social, and economic factors. Today we take these reasons for granted, not realizing this line of reasoning was established by Lot.

According to Lot, the Roman Empire became an enormous trade sphere with its population clustered close to the sprawling shores of the Mediterranean. It’s decline was a result of economic retrogression in the west as the wealth was gradually transferred to the workshops, merchants, and granaries of the east which supplied the west with its food and luxury goods. Meanwhile, as the military and welfare needs in the west continued to rise, impoverishment of the ever decreasing tax base set in. In its desperate attempt to hold things together, the Roman government became ever more grasping, even as the bulk of the population is reduced to serfdom. By the time the frontiers are being overrun, there has taken place a psychological change in men’s minds. The barbarian invasions merely transfer ownership of the wretched system.

A Rome "too vast, too complicated and too cunning"

This time in history has become one of my (always 2 or 3 at a time) "go to" study fixations for now. The countless comparisons and contrasts with our own society and times are irresistible. This work is encyclopedic, moving pretty briskly (its vast scope considered) with a critical eye across laws and government, but also arts, architecture, popular culture, literature, the fates of the trading and servant classes, etc. In the manner of many of these slightly older histories, it moves with a nice cadence, but this one is a bit more patient and detailed than most. It zooms in and out on various topics with reasonable freshness mostly. The Latin words, as for various political titles, are mighty familiar (also showing themselves as precursors of Catholic nomenclature). The book compared to the many others nowadays available does not carry the most artful and sprightly energy, so, I would only recommend it as an early entry in studying this field to those mature and patient and reasonably widely educated already. Only occasionally does some single vivid, piercing imagery leap out (as in the descriptions of vulgar and ghastly sports and entertainments lavished on the city commoners). For such a reader, the rewards are plentiful. My store of knowledge is widened and deepened here, across the very wide range of topics. And in history and social sciences, the tapestry of what causes what is so vast and complex, it takes for me often a vast and complex array of events explained to feel even a little confidence in my notions of what was going on.
Some find this narrator pompous. I think he's great, with a strong and clear and confident voice. Fortunately he is prolific too.

Lot covers many elements of the decline of the ancient world (science, various art forms, political..etc). The book gives a rare combination of depth of understanding with broad survey. Some would complain that hes not P.C. or 'deliberative enough"-- e.g. he will flat out say that "by the 5th century plastic art had declined and was utterly worthless" A mark of a great historian is one who is capable of and not afraid to give you rapid judgements and explanations on small items. its a bit out of vogue today.

The production--chuckle! well..others have complained about the gongs, the gregorian chants at the end, the weird reverb chamber when the narrator reads quotes. Yes its a bit strange or as some have called it "cheesy". I like griffin well enough though, even if he over emphasizes -sort of like John Houseman in the old smith barney commercials. The weird production is a minor element that has little real impact

Need to simplify and connect the facts.

Comes across as a prejudiced author chasing squirrels. The book highlights the core reasons for the dissolution of the Roman Empire, but many of the good facts are not connected to each other or the fall of Rome.

I very much enjoyed Charlton Griffin's speaking voice and pronunciation of Latin words. And also Ferdinand Lot's "biting" wit, of the "Old School".