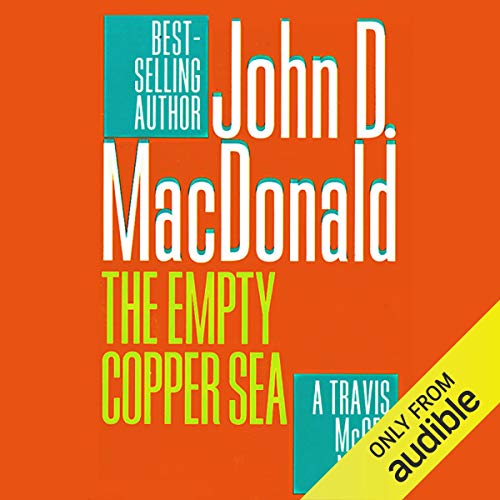 By: John D. MacDonald
Narrated by: Robert Petkoff
Try for £0.00

Van Harder, once a hard drinker, has found religion. But that doesn't keep folks from saying he murdered his employer, Hub Lawless, whose body hasn't been found. To clear his name, and clear up the mystery, Van asks friend-in-need Travis McGee to find out what really happened. What McGee finds is that Timber Bay is a tough town to get a break in when you're a stranger asking questions. But what he also finds is that, dead or alive, Hub Lawless is worth a lot of money. Some are eager to get a piece of that action - and some are willing to take more than a piece out of anyone who gets in the way.

What listeners say about The Empty Copper Sea

It’s been awhile since I’ve listened to a travis McGee but this was great. Good clean storyline with the usual bumps and scrapes. Loved it

"A man needs only to be turned around once with his eyes shut in this world to be lost."
- Thoreau

This was John D. MacDonald's 17th novel (I'm not sure how many total novels he had published by 1978), but he had been punching them out about 1 per year since 1964, until 1974. So, The Empty Copper Sea came after the biggest McGee break of all. There was a sense of crisis in this novel, and McGee malaise that was diagnosed by Meyer (economist side kick) and fixed by a woman (almost an inverse of McGee's usual sexual healing).

The book takes place mostly in Timber Bay, FL (fictionalized), inside of Dixie County (real), high up the gulf-side, above Clearwater. The town has been rocked by a business man who faked his death and disappeared leaving everyone (wife, kids, business associates, and the captain of the boat he "fell off" high and dry. McGee and Meyer are trying to salvage the reputation of captain (an old friend) and untangle the ugly knot left behind. Essentially, it seems almost like a man in the midst of a writing crisis (JDMcD) is writing a novel where the hero is sorting through his own mortality crisis (McGee) while trying to solve the mess created by a man who tried to ditch his obligations after having his own crisis (Hub). Oh, and perhaps Florida is also having its own crisis caused by growth, tourism, and environmental issues caused by growth.

It was a solid McGee novel. Some of the same feminist traps as most his other McGee novels, but not so deep. With Philip Roth recently dying it is also interesting to observe what Sir Kingsley Amis once said about John D. MacDonald (and probably gets at the root of why, even when I get frustrated with MacDonald, I keep coming back). According to Amis, MacDonald "is by any standards a better writer than Saul Bellow, only MacDonald writes thrillers and Bellow is a human-heart chap, so guess who wears the top-grade laurels." Now, I'm a big big fan of Saul Bellow, so I'm not sure I would go THAT far, but I think we do a disservice when we dismiss good genre fiction too quickly.

I thought I had it all figured out. I knew who the bad guy was. Then it all changed! This one was a very good read (listen?) and well worth the time. You do need to know that some of the characters and plotlines from this one will be continued in the next one - The Green Ripper. So, if you are not reading them in order, make sure you read this one before the next one. An excellent book, with a great ending!

One of John D's best.

This selection is one of my favorite MacDonald books. The ennui that Travis feels in the early chapters in the book are familiar to those of us who have faced the transition between an elongated adolescence and adulthood. The change in his state of mind is another one of the touchstones that is familiar to those who hit their mid thirties single. There are a few of the contrived or overly dramatic elements that are one of the few weaknesses of the McGee novels. An excellent read for those who are fans of the genre.

I would recommend this book, one of the later in the McGee series. The reader, however, is obviously unfamiliar with MacDonald's writing. The McGee is fairly well done, but the Meyer voice sounds as if he's a naive sixteen years old. A few of the female voices are indistinguishable from one another. Someone needed to do a bit of homework on the characters! I want to listen to the final McGee book (read it years ago) but with this reader I'm not sure I could take it.

What was one of the most memorable moments of The Empty Copper Sea?

McGee's philosophizing about his personal miasma and then renewal.

Who would you have cast as narrator instead of Robert Petkoff?

I do not have enough familiarity with your stable of American readers (I generally listen to British fiction) to say. Maybe a resurrected Darren McGavin??? I wish!

Did The Empty Copper Sea inspire you to do anything?

The McGee books are what they are. Now they could be criticized for sexism and ageism. But what the heck? Everyone has a bit of McGee hidden somewhere inside. And MacDonald wrote quite a few really good sentences.

Empty Copper Sea is my favorite John D MacDonald Travis McGee story. I haven't read or listened to all of them but of the many I have, this I my Number one. Great story, really good character study in McGee, and a dynamite ending make for a great time. Petkoff is so adept at dialogue nuance and may be the best audiobook narrator when it comes to handling male and female characters. He is the perfect fit for MacDonald's words. Buy it and enjoy!

One of my all time favorite writers

It has been a long while since I read or listened to a Travis McGee story, I found out how much I missed him.

Once again Travis rushes to the rescue, this time for a friend's reputation, not millions in gold or such. Friends are very important so Travis pulls out all stops in this well written story of intrigue.

Great story, well performed, what more can you want. I need to go back and refresh myself with more Travis McGee. Good stuff, enjoy, I SURE DID!

Getting better with age…

I began reading John D. MacDonald’s Travis McGee novels in 1965 and devoured them all until he died. I decided to try them on Audible and they are superb, especially with Robert Petkoff’s narration.

The knight odds aging out perhaps not

Very ha Florida based plot in a small gulf coast town north of ST Petersburg. Investigation of a disappearance with a few damsels in distress.

loved it and the narration was excellent,Robert Petkoff always does a good job,he is one of my favorites

Loved this one think it might be my favorite so far! Didn't figure this one out until the end.