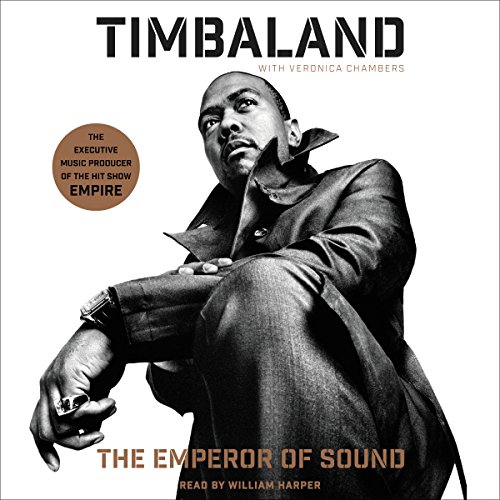 The Emperor of Sound

By: Timbaland,Veronica Chambers
Narrated by: William Harper
Try for £0.00

"The most important producer of the decade." (The New Yorker)

Timbaland is indisputably one of the most innovative music producers working today. The Grammy Award–wining producer, rapper, songwriter, and composer has collaborated with the mega-superstars of pop, rap, hip-hop, and R&B, from Jay Z to 50, Madonna to Justin, Nelly to Björk. His solo album Shock Value has sales tipped in the millions, and the video for his international chart-topping single "Apologize" has been viewed more than 100 million times on YouTube.

The Emperor of Sound is an exclusive look at this talented artist and his extraordinary career. Here, as unexpected as much of what he creates, is an introspective memoir, revealing a modest and God-
fearing man with an intense appreciation for the creative process, a humility for his musical gifts, and a unique understanding of what he calls "the science of hearing."

Timbaland embraces and champions those who possess his same life-or-death passion for music: he reveals that it was Missy Elliott who steered him to own his confidence, that it was Aaliyah who inspired him to stretch his craft beyond boundaries, and that it was Justin Timberlake with whom he found an unprecedented creative chemistry, making "SexyBack" an instant classic. Timbaland also reflects on his growth and recent success in the entertainment business in his pivotal role as the executive music producer of the enormously popular television series Empire.

Written with a cinematic flair and abundant with illuminating anecdotes about some of today's most renowned musical icons, including his former classmate and collaborator Pharrell Williams, The Emperor of Sound is an engaging memoir of a life in the works, showcasing the brilliant inner workings of a true musical genius.

What listeners say about The Emperor of Sound

It's called a De-esser

Seriously. Waves makes some great plugins. Invest and kill the sibilance. It's like an explosion every time he says anything with an s in it. Otherwise I really enjoyed the story.

Great Story and stories. I loved the many waves of this book. Inspirational, Informative, and a must read for those seeking an inside look into the music industry. Thanks Big Brother for sharing yourself with us.

This book is a perfect reflection of not only music but life as a whole. It moved me to tears and inspired me to be better at the same time. God bless Timothy "Timbaland" Mosley. I recommend this book to anyone who maybe going thru a lot in life or just maybe feels rejected. This book is encouraging and it makes you feel right side by side with Tim.

Wow, greatness comes with a price and Timbo is the epidemy of that. One of the best producers to do it.

All I can say is I needed this. Absolutely motivating and hilarious stories in here. Lots of gems.

I relate so much to Timbaland, this book was so amazing. Thank you and definitely a great listen!

The trials that Tim went through to get to where he is today is fascinating. The narrator delivers the book very well too. Good Job “Chidi” LOL.

I really enjoyed the book. I would have loved to hear Timbaland narrate his own story. His voice is unique and would have been perfect for his story.

I loved the insight into Tim's life and thoughts. he is truly a musical hero of mine. The reader mispronounced a few names like Kelis but that is ok.

lots to learn. whether you're a music producer, si

lots to learn. whether you're a music producer, singer or just a fan.
Emperor of Sound will give you hope