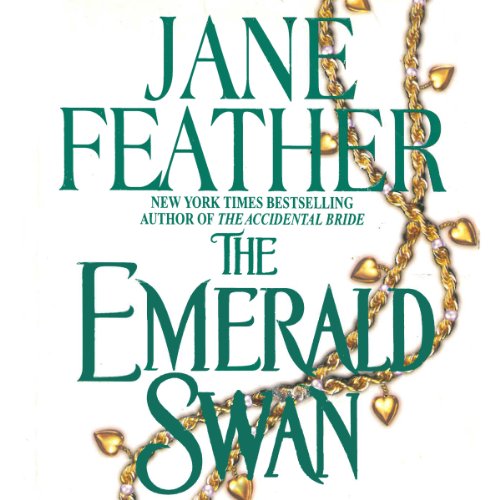 By: Jane Feather
Narrated by: Serena Daniels
Try for £0.00

Twins are separated at birth; one grows to be the unhappy ward of a nobleman while the other becomes a crafty but stunning street kid.… So opens Jane Feather's romance audiobook, The Emerald Swan. Of course, trading places ensues. Feather fans will recognize this title as the third installment of the Charm Bracelet Trilogy. Serena Daniels' performance captures Feather's sensual tone. Her luxurious voice brings this blossoming love story to life. She uses each word to heighten the mounting passion. When Feather and Daniels join forces, sumptuous sparks fly for the romance fans.

My new story begins on a terror-filled night when two babies - identical twin girls of noble birth - are separated. One grows to womanhood as the frail, manipulative ward of the handsome young earl of Harcourt. The other becomes an enchanting, street-smart urchin who earns her way as a traveling player on the streets of England and France.

The two girls' paths might never again have crossed if Harcourt hadn't run into Miranda in the midst of an exuberant performance. The resemblance to his ward is unmistakable - uncanny, in fact...and an ambitious plot begins to take shape in Harcourt's mind.

His ward, Maude, will commit herself to a convent rather than marry the love-struck king of France, who will soon be traveling to London to claim her. What if Miranda were to take Maude's place? Harcourt is confident that with the right training, the right clothes, and the right attitude, the lithe, carefree Miranda will captivate society - and the king.

So begins Harcourt's breathtaking scheme to turn an ugly duckling into a gorgeous swan. But if he succeeds too well, Miranda may become something irresistible - even to Harcourt....It's a delicious dilemma and a dangerous deception...and the twists and turns surprised even me.

What listeners say about The Emerald Swan

Totally Engaging From Start to Finish

Like many others, I have found I totally love some of JF's books and other's read as though she was under the gun to get a book out and just threw one together. The main protagonist in this story is lovable from the very beginning. I especially liked the way she contrasted the twins. I didn't like the main male character, and even though he did eventually get a little better, I still didn't like him! The fact that I remained interested and totally engaged despite not liking one of the primary characters, is evidence of Ms. Feather's talent.

Yes, I do recommend this one. The characters stayed true to how they were portrayed, yet still grew.

And, I have to admit, the steamy bits were quite...STEAMY! Always a good thing for me!

Sweet romance... plus a monkey!

What made the experience of listening to The Emerald Swan the most enjoyable?

That overall effect of a good story and a good narrator.

That's easy... Chip of course! Because you never knew what he'd do next,,,,

She has a comfortable voice, easy to listen to, which is a imperative. I stopped hearing her and just heard the story. No frustrating moments of crazy pronouncements or mixed up voices.

love, intrigue, and a monkey

This was a fun regency romance with a few outrageous characters, yummy plot lines, intrigue, love and enough twists and turns to make it fun. Is it a excellent literary achievement? No, it's a romance novel, period! Worth a credit? I paid for it and don't regret it!!