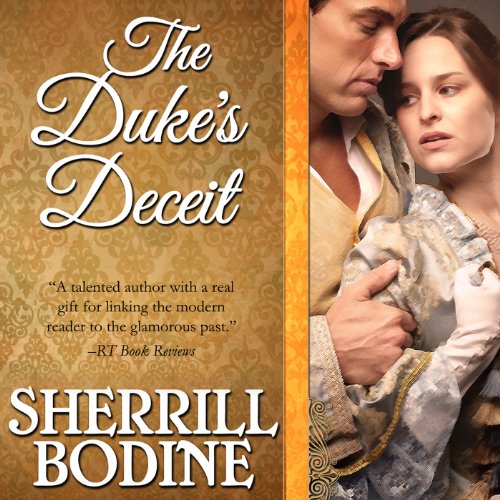 By: Sherrill Bodine
Narrated by: Susan Duerden
Try for £0.00

What if living a lie gives you the life you want to live?

Mary Masterton is a desperate woman. Facing the advances of loathsome suitor she can’t imagine marrying, she is short on choices. She convinces a handsome stranger, the victim of a head injury, that they are engaged. Left with no memory of his previous life, the man has no reason to doubt her. The man’s signet ring is the only clue to his true identity as the Duke of Avalon. Determined to reclaim his past, he begs Mary to accompany him on a journey to track down the meaning of the ring. Once more Mary finds herself in a hopeless situation: help the man she has come to love and risk losing him forever, or keep him in the dark and live a blissful lie.…

What listeners say about The Duke's Deceit

Let’s start with the worst part of the book: He’s 35 and she’s 19. Really? Nine-TEEN. I wasn’t even sure I wanted to finish reading this when I read their ages. Why do authors do that?

However, it turned out to be a very good read. I liked Richard and Mary and since there was nothing immature about Mary it was easy to forget she was so young.

There was a little drama about how Mary and Richard met, when he helped her and her Uncle Ian get the horses out of the burning barn and Richard was injured with a bash to the head and got amnesia. Then there was that awful Sir Robert. Then the absolutely horrible grandfather of Mary’s. So, there really wasn’t a dull moment. Arabella went from being a whining, demanding fiancé of Richard’s to a nice person after she fell in love with Charlesworth, which is what Richard and his mother, the Duchess of Avalon were aiming for, so Arabella would cry off hers and Richard’s betrothal.

There wasn’t any sex in this book but it was full of desire, which I liked.

And it wasn’t a bad storyline for something from 1993.

As to the narration: Susan Duerden is one of my top 5 female narrators and she did an excellent job in this book. She did a great job on all the different men’s voices and the women’s voices were age appropriate, from Mary to the Duchess of Avalon. AND she reads with such emotion.

This book was written in 1993 and reads like it!

I don't think it was well spent. I thought it started very well with a great idea..memory loss. There were some elements discussed that never went anywhere. There was going to be a ball, but it never got that far. There was a wonderful new wardrobe that the heroine never got to wear. And no love sceen between the H/H.
In this book the hero spent more scenes with his mother than the heroine. Not sure why that was the author's choice for the story to progress. Also the age difference between the h/h was approx 16 years..which was a little too much for my tastes.
It really read like a book that probably started being written 25 years ( a quarter century) ago, so you have more modern books that have applied this plot to better effect.

What was most disappointing about Sherrill Bodine’s story?

The plot seemed rushed. It was sut up for the first 9 chapters, which flew by as it was exciting. I realized that there were only 5 chapters remaining and wondered how things would get wrapped up in that time, as there were really 3 couples getting together, not just one. The last 5 chapters went by with everything being resolved magically. I can suspend reality, but not to this extent.
There was a car..sorry, I mean carriage chase at the end with 4 carriages and one rider following each other. I think I saw something just like this in an episode of "The simpsons". At that point it just became cartoonish.
There was also a constant reference to how people were good at hiding their real feelings and making their faces blank. What difference does this make when the internal dialogue expressed what the character is feeling. I am not sure why this is important, but it took up a lot of time to describe.

Which character – as performed by Susan Duerden – was your favorite?

I bought this book because of Susan Deurden. She is one of my favourite narrators and does justice to every character. If it were not for the joy of hearing her read a book, I would have given up on this one. She is excellent!

What would have made this romance irresistible?

I indicated that it was a good idea and a great start, but the author rushed to the end. There was
1 an arrogant duke
2 foreshadowing that his heart would be crushed by a woman he loved
3 memory loss and memory found, which improved the hero
4 returned to arrogance, the hero/duke alienates the heroine ( that has increased value by chapter 12)
If the author could have gone forward and written a ball room scene/some jealousy at heroine gaining popularity/having to win back the heroine that the hero alienated, causing him to gain humility, the book could have been really wonderful. I was anticipating some of this, and was very disappointed.
Also to have no love scene, just does not work and as stated is too retro.

I will have to take more care to note the copyright date of the story,as some are too old-fashioned to meet my current expectations. This was a book I would have probably enjoyed if I read it in 1993, but I am older and more experienced to have it resonate with me.