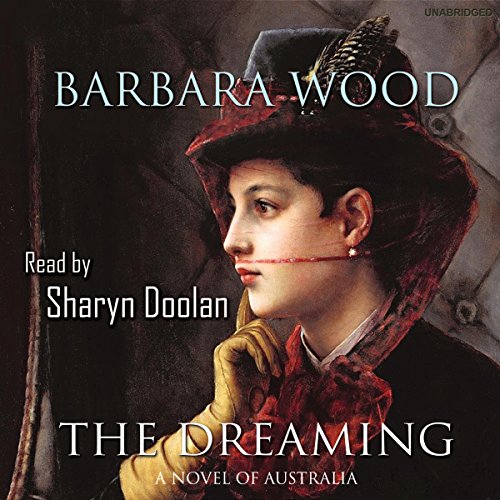 By: Barbara Wood
Narrated by: Sharyn Doolan
Try for £0.00

Set in the untamed landscape of mid-19th-century Australia, The Dreaming is a rich and potent tale of hidden passion and broken taboo.

Australia, 1871. Following her mother's sudden death, Joanna Drury sets sail from India and arrives in Melbourne to claim the property left to her by her mother - and to trace the mysteries of her family's past. From her first steps on shore, Joanna becomes entangled with a lost boy who leads her to the fascinating Hugh Westbrook. She agrees to look after the child in exchange for Hugh's help in finding her inheritance. But she falls deeply in love with Hugh and with life at his sheep station, Merinda. When strange nightmares begin to plague her - the same that tormented her mother - Joanna starts to notice the Aborigines' strange reaction to her. Delving into Australia's past, she discovers the tragic events that have marked her family's destiny and her own life - events that happened long ago, in the time the Aborigines call "the Dreaming".

Full of intriguing historical detail, Wood's compelling story brings the clash of immigrant and Aboriginal cultures to stunning life, capturing the danger, mystery, and romance of an emerging country.

"A great summer book. It has everything - good characters, love, adventure, mystery and mysticism." ( Los Angeles Daily News)
"Superb storytelling...." ( San Francisco Chronicle)
"Magnificent...everything a historical novel should be: big, bold, with larger-than-life characters chasing their dreams, and demons with equal fervor. The Dreaming has all that and more." ( Orange Coast Magazine)

What listeners say about The Dreaming

I enjoyed the story but struggled with the voices...made me want to know more about the Aborigines.

Could have been, but wasn’t

This could have been a great series. There were so many storylines that I felt we just got a tease of, but never really developed like they could have. And the ending just left too much hanging. Good premise, great potential, but fell flat. And the narration was weird. I couldn’t put my finger on just what it was, but it felt robotic at times.