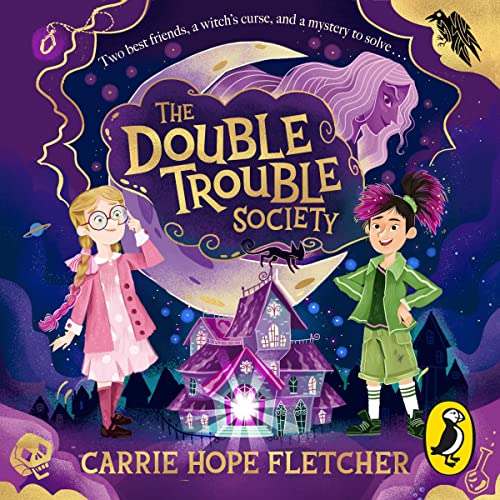 By: Carrie Hope Fletcher
Narrated by: Rachel Hurd-Wood
Try for £0.00

Brought to you by Puffin.

What do you get if you mix together two best friends, a witch's curse and a haunted house? A spell-binding mystery from acclaimed performer and best-selling author Carrie Hope Fletcher—star of Andrew Lloyd Webber's Cinderella.

They say children who are born on Friday 13th are immune to evil spirits. Whilst Ivy and Maple liked to believe that was true, it didn't stop them checking for monsters under their bed each and every night.

Ivy and Maple have been best friends ever since they were born at exactly the same minute 12 years earlier. They're always on the look-out for a new adventure, but unfortunately Crowood Peak is officially the most boring town in the world. Or at least it was until children start to mysteriously disappear and, even stranger, none of the grown-ups seem to have noticed....

It's up to the Double Trouble Society to work out what's going on. All the evidence points to the old mansion next door with strange green lights in the windows and a new owner who looks suspiciously like a witch!

Can Ivy and Maple solve the mystery of Hokum House and rescue their friends, or will they be next on the witch's list of victims?

What listeners say about The Double Trouble Society

Brilliant for all ages