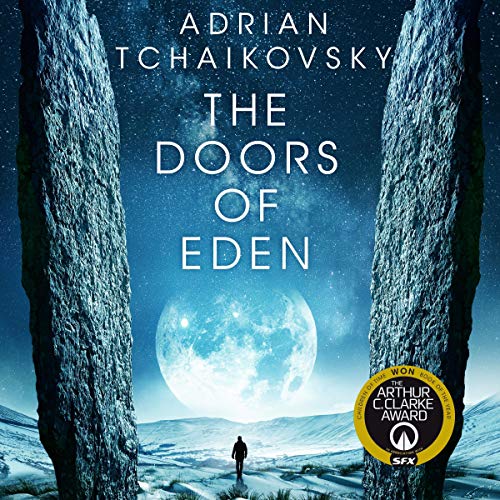 The Doors of Eden

By: Adrian Tchaikovsky
Narrated by: Sophie Aldred
Try for £0.00

They thought we were safe. They were wrong.

Lee and Mal went looking for monsters on Bodmin Moor four years ago, and only Lee came back. She thought she’d lost Mal forever, now miraculously returned. But what happened that day on the moors? And where has Mal been all this time? Mal's reappearance hasn’t gone unnoticed by MI5 either, and their officers also have questions.

Julian Sabreur is investigating an attack on top physicist Kay Amal Khan. This leads Julian to clash with agents of an unknown power – and they may or may not be human. His only clue is grainy footage, showing a woman who supposedly died on Bodmin Moor.

Dr Khan’s research was theoretical; then she found cracks between our world and parallel Earths. Now these cracks are widening, revealing extraordinary creatures. And as the doors come crashing open, anything could come through.

Adrian Tchaikovsky brought us far-future adventure with Children of Time. Now The Doors of Eden takes us from Bodmin Moor to London and alternate versions of earth. This is an extraordinary feat of the imagination and an unstoppable adventure.

What listeners say about The Doors of Eden

I gave up after Ch3

Disappointing because Cage of Souls was quite good. This story line was just too woke. Ch 1 with its inter racial teenage lesbians left me confused. Chapter 2 with the Security Service siding with Pakistanis against “white extremists “ was odd. And as for the interludes between each chapter ...
Not for me thanks.

The easiest way to summarize this book is: Straight White Men are bad & Brown LGBT people are our saviours.

Not his best work. Politically Pushy.

His other books are great (Children of time series, Dogs of war, etc) this one though, is pretty poor.


There are three main stumbling blocks to enjoying the book.


First is that the author is constantly trying to ram a LBGT+SJW point of view down your throat. After the 8th or 9th time this just feels like a political add campaign and I started to tune out. Its constant throughout the book all the way to the end and really detracts from the story.


Second is to do with the sense of mystery and excitement. In his other works, the author is fantastic as creating an alien perspective and keeping an atmosphere of the unknown. This book loses it after the first couple of chapters, maybe because their is no alien point of view in this book, we never see the 'other' side. After that, the mystery is lost the book becomes a lot duller.


Third is the 'bad guy'. He's a generic cookie cutter villan from any B movie. It really lets the book down. We don't even get his view point or background. He's just a bad guy for the sake of it. Half of a good plot is a good villan or opposing side or point of view. This guy is as shallow as they come.


Side note: Narration was perfectly fine.


All in all, I was very disappointed. Probably best to save your money this time. I'm hopeful the next book will be a return to form.

Another example of a book from an author who's previous books you have loved for the sheer quality only to find that this one is so bad in every respect that you don't believe it's the same author at all, or an old unpublished book dusted off or tarted up. Plus it had the wrong narrator, dull and hugely unimaginative. I think his wife or child wrote it.

Woke propaganda over a puerile story

A great writer brings out propaganda that should not be published as anything but modern dribble. It feels forced and underdeveloped; it is not worth reading.
Sad to see a writer like this to be infected by one of the new religions.

Disappointing for a great idea

If l e Modessit Jnr had written this story or had it been narrated by William de Vries it would have been better. I don’t know if it was the writing - though I have enjoyed this author in the past - or the cartoonish narration but I slowly lost the will to live and began to hope that one of the ‘cousins’ would eat a protagonist just to see what would happen! I am somewhat annoyed also by the casual introduction of a trans character and a lesbian couple but no real in depth understanding shown about these characters. Uncomfortable feeling of tokenism? Or is that just me? I gave up with three hours to go and returned it. Perhaps a narrator who could express some emotion might have helped. Sorry.

Adrian has done it again, another great novel and it great to see new ideas explored.

I have read / listened to several or Adrian Tchaikovsky’s books now and this was probably the best. The interludes of alternative timelines and the different paths of evolution were themselves worthy the listen, but there was also a decent story stringing the whole thing together. The performance was also great; the accents were decent and didn’t make me cringe. Buy it.

I loved this book. I don’t want to give away any spoilers, but this is not the monsters on the moor adventure you might expect from the description on Audible. It is a beautiful story, complex yet engagingly told, and excellently narrated. At the time of listening I felt like I could do with something uplifting at a difficult time for the world. I expected the book to be good. What I didn’t expect was it to be such an uplifting, joyful parable showing what we might achieve if we could learn to get along with those who seem different to ourselves.

Having discovered Tchaikovsky through his Children of Time novels, I wasn't sure if I could enjoy a different story of his as much. Turns out I can. I did at times find it difficult to pick up and put down in terms of listening as it was easy to lose your place in the timelines - this is suited to long periods of listening instead of short bursts, if , like me you forget where you are in the story! But I really enjoyed the narrator and dramatisation.

didn't finish, I have been listening to it for almost 2 weeks and oh boy what a drag it has been!!! It was super disappointing! Not my first Tchaikovsky book and I don't know who wrote this! It's a pile of popular tropes thrown in one garbage bin and fired up to dumpster fire! I have no words, just butt-stupid characters, All the baddies were some weird racist mix of "ex-military specialists" who were shit at violence and planning. It felt like a woke YA book with some random plot and Tchaikovsky's name added to cover!

Enough layers to keep me interested, but not too many that I get lost or have to replay. Great narrator, fun story

Has all the elements of captivating book, but ultimately sinks in swamp of author's ideological agenda. Preachy.