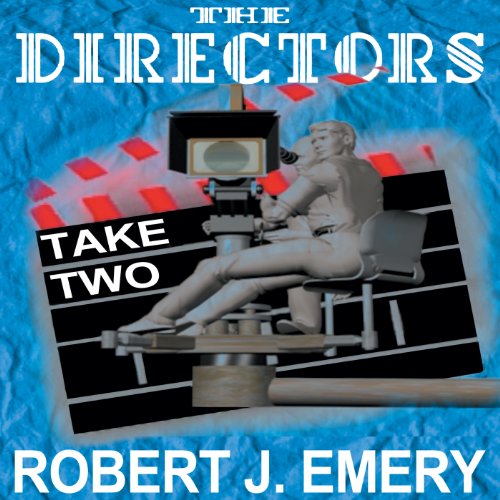 Robert J. Emery takes an in-depth look at the works of 13 filmmakers in this second installment of his The Directors series. Culled from interviews with the likes of Rob Reiner, Spike Lee, and Terry Gilliam, listeners will find behind-the-scenes tales of on-set pranks, unheralded actors who would become stars, and the work that went into creating classic scenes. Melissa Reizian Frank and Torry Clark do exceptional work to give voice to these disparate and talented individuals, making The Directors: Take Two an essential listen for cinephiles interested in an insider's look at some of the world's most iconic films.

Today's most acclaimed film directors reveal intimate behind-the-scenes details of their most influential work and their unique approaches to their art.

In the companion to the Silver Plaque-winning Starz/Encore documentary series, this book offers interviews with 13 top filmmakers. Contains each director's filmography, complete listings of major awards, and cast credits for all films discussed.

What listeners say about The Directors: Take Two

Took 1 star off due to directors discussed.

What did you love best about The Directors: Take Two?

I love Emery's books and their approach of letting directors go through their filmography one by one and share stories, etc. My only drawback on this one was some of the directors were not of interest. Nothing against Emery, but some directors are not my favorites.

Rob Reiner. He did a great job of conveying his career.

Which character – as performed by Melissa Reizian Frank and Torry Clark – was your favorite?

Not an emotional book but I love Emery's approach enough that I'd recommend these books heartily.

Only reason this isn't a 5/5 is some of the directors are not of interest.

If you can get by the narrator...

Most: The rare behind the scenes info (rare not because it's new information, rare, because there is little of it here)Least: the endless, monotonous credit lists for each movie discussed - even when the movie is not discussed at all!

Would you be willing to try another one of Melissa Reizian Frank and Torry Clark ’s performances?

Melissa's yes, Torry's probably not - at least on this subject matter.

Could you see The Directors: Take Two being made into a movie or a TV series? Who should the stars be?

I just love out of context unvetted questions like this.

It's a shame that they couldn't find someone familiar with Hollywood to narrate. The cringingly bad pronunciation of what are now household names makes the narrator a poor choice at best, and a major faux pas for the producer who let these pass (or, in keeping with the style of narration, should I say "fox paw"). It can lead to confusion. If read in print: "Lawrence Oliver" would certainly be corrected by the brain, given the subject matter (to Olivier of course - a name pseudonymous with acting), but when you can't see the text, the audio makes you wonder who was this famous actor, with the same last name as the first of a famous Dickens character. "Gee, I don't remember anyone named Mr. Oliver in that film". While this is the most egregious of them all, it's only one of many howlers; only once you get pulled out of the narration do you realize who they are truly talking about. It might make a good party game. Remember to stretch those eye muscles before listening - you will be rolling them in no time.While there is certainly good information here, it is neither as deep or broad as other books that have had one-on-one conversations with Directors (Bogdanovich's series for instance). While the cast list is a nice review of who was in each movie, when that list (that often contains names of the third water-boy to the left) is longer than the comments on the film itself, one has to wonder what other part of life one is missing while listening.And while not a criticism, be forewarned, it's not exactly current. If you haven't checked the publication date, you will be wondering where the latest films (say from the past two decades) are from these directors.A pleasant distraction to be sure, but serious movie buffs will probably not rave about the info, but, I assure you, they will rave over the narration - rave and rant!(The Sean Connery impression though is a hoot - but conspicuously singular - what, no Pacino impressions?)Certainly check out the others in the series - this narrator did not do the first in the series. That narrator was terrific! What a difference it makes