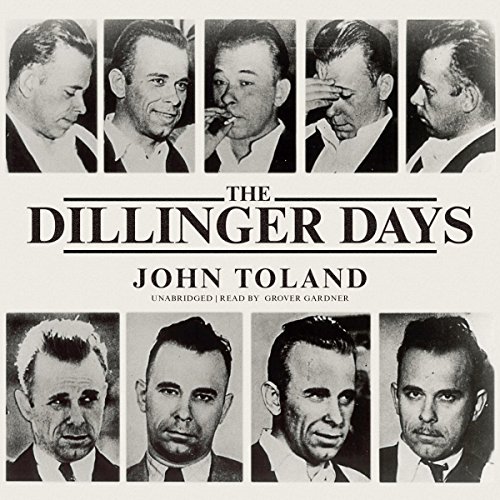 By: John Toland
Narrated by: Grover Gardner
Try for £0.00

For 13 violent months in the 1930s, John Dillinger and his gang swept through the Midwest. The criminals of the Depression robbed almost at will, as the Indiana State Police had only 41 members, including clerks and typists. Dillinger's daring escapes at Crown Point jail or through the withering machine gun fire of FBI agents at Little Bohemia Lodge, along with his countless bank robberies, excited the imagination of a despondent country. He eluded the lawmen of a half-dozen states and the growing power of the FBI, earning him the dubious honor of Public Enemy Number One and captivating Americans to the present day. His brief but significant career is vividly chronicled here in extraordinary detail, as is the entire outlaw era of Baby Face Nelson, Bonnie and Clyde, Ma Barker, and Machine Gun Kelly. John Toland conducted hundreds of interviews; his research took him through 34states, into the cells where Dillinger was confined, and into every bank he robbed.

The Dillinger Days is the inside account of a desperate and determined war between the law and the lawless, a struggle that did not end until a unique set of circumstances led to Dillinger's bloody death outside a Chicago movie house.

What listeners say about The Dillinger Days

I’m halfway through this and desperate for it to finish. It’s written in a tedious and uninteresting way and the narrator they chose to read it is equally boring. His monotonous drawl is, however, quite good for sending me to sleep.

book was great untill! we got to clyde and bonnie Parker pure horse crap to have such disinformation means to me a lack of research there for the rest of the book is unreliable making it pointless in listening to or reading

Must have been written by Hoover

Having just finished Jeff Guinn's exhaustively researched book on Bonnie and Clyde, I was disappounted as well as concerned to find that Toland merely spewed forth the most cursory scurrilous and disproved information about them. Straight out of the mouths of period news hacks, completely irresponsible sensationalistic journalism regurgitated as fact. It makes me question the veracity of everything else Toland writes. I am returning this rather than waste my time on false accounts.

Mr. Gardner's reading is of the usual excellent quality.

Author apparently watched movie version of Bonnie and Clyde for all his information on the subject. Makes me question the veracity of the rest of the book. Grover Gardner is the only positive.

Although an interesting and entertaining listen, it's hard to overlook the factual inaccuracies, mostly regarding Bonnie and Clyde. This fact leaves me wondering how many other portions are also inaccurate.

although the narrator did a good job, the accuracy

although the narrator was good, the accuracy of events were non existent. I only finished it because I had to see what other non truths could be told.
I recommend that the author do real research before his next writings.

This was a riveting story of Dillinger and his gang with stories of Bonnie and Clyde, Ma Barker and other infamous folks of a particular time and place in America’s history woven in and out. The author’s description of those times became a character in the story.
The narrator was wonderful! Without using different voices he somehow brought the people to life. He was as interesting to me as the story.
I would definitely recommend this audiobook.

I loved the reading of this historical document. It does either depict Dillinger as a folk hero or a modern time Robin Hood. One finds themselves rooting for him. Outlaws seemed to have more of a sense for life back then.

A simple story written about 30 years after the events depicted therein, so things feel fresh. What a joy to learn that bad people were just as bad back then (even the gals), but a little depressing to realize that law enforcement was just as incompetent then as today.

love that the author traveled 10,000 miles across the united States getting first hand experiences on both sides of the law of everyone involved. and the writing and narration is spot on

I found this book to be very informative. It filled in a lot of blanks from the stories I heard as a child.