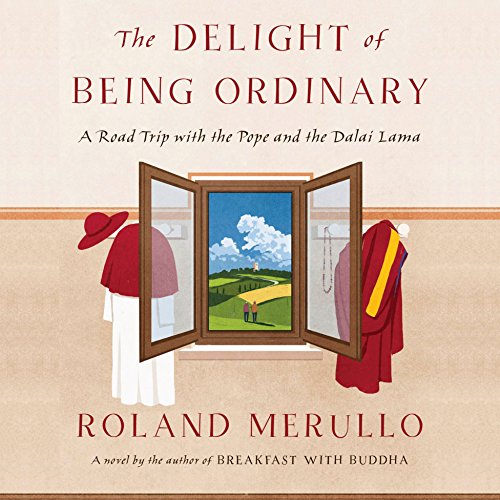 The Delight of Being Ordinary

Roland Merullo's playful, eloquent, and life-affirming novel finds the Pope and the Dalai Lama teaming up for an unsanctioned road trip through the Italian countryside to rediscover the everyday joys of life that can seem, even for the two holiest men in the world, unattainable.

What happens when the Pope and the Dalai Lama decide they need an undercover vacation? During a highly publicized official visit at the Vatican, the Pope suggests an adventure so unexpected and appealing that neither man can resist. Before dawn, two of the most beloved and famous people on the planet don disguises, slip into a waiting car, and experience the countryside as regular people. Along for the ride are the Pope's overwhelmed cousin Paolo and his estranged wife, Rosa, an eccentric hairdresser with a lust for life who cannot resist the call to adventure - or the fun.

Against a landscape of good humor, exploration and spiritual delight, not to mention the sublime rolling hills of Italy, The Delight of Being Ordinary showcases the charming sensibilities of Roland Merullo (whose best-selling Breakfast with Buddha has sold over 200,000 copies) in a novel that makes us laugh as well as think about the demands of ordinary life, spiritual life, and the identities by which we all define ourselves.

" The Delight of Being Ordinary is a thrilling book, a rip-roaring, risk-taking literary tour de force that kept me up late and moved me deeply. Bursting with laughter and suffused with the divine comedy of the human condition, the story makes our complicated world seem a broader, more generous place. In this ultimate celebrity road trip, Merullo has written a love story for our times." (Susan Cheever, author of Home Before Dark)
"Another genre-defying installment in Merullo's engaging series of seriocomic religious novels.... Admirers of previous volumes will recognize Merullo's knack for depicting goodness without treacle in his deft portraits of the pope and the Dalai Lama, and a La Dolce Vita-esque party scene spotlights his ability to discern humanity in the most decadent circumstances....moving and unnerving.... Lucid, unpretentious fiction spotlighting the drama of trying to make the divine part of our everyday lives." ( Kirkus)
"A quirky but uplifting story in which Paolo de Padova, first assistant and cousin to Pope Francis, is asked to whisk away the pope and the visiting Dalai Lama on a clandestine vacation.... Merullo's newest is a thoughtful, compassionate, and mature work, a 'Christian- Buddhist-agnostic prayer' to the world, and readers will find a pleasant surprise in its conclusion." ( Publishers Weekly)

What listeners say about The Delight of Being Ordinary

Very well written and very well narrated. An enjoyable story with much reflection throughout. I will be reading more of Merullos books for sure.

Another superb book by Roland Merullo with excellent narration from P J Ochlan. A real treat.

Hope this is not the end of the story!

If you start with Breakfast with Budda and work through to this book, it is a great journey... 3rd time through and still find new insights. 60 years of reading everything and find this work the best. THANKS ROLAND !!!!

I wanted to like this more. Love the idea of the book. That's why I bought it. Such opportunity for insight but the book ended up detailing a couples inability to get along. If I had been on this trip I may have taken my chances on my own rather than listen to them constantly bicker through a once in a life time adventure. Too bad. Missed opportunity for a great story. I found that I had to force myself to finish it. One reviewer wrote that it was funny, a few spots were genuinely funny but overall the humor is very sarcastic which over time leaves a bad taste. Would not recommend it.

May be Merullo's best work yet!

I have loved many of Roland Merullo's works, particularly the Breakfast w Buddha trilogy and American Savior.
The Delight of Being Ordinary, especially as beautifully narrated on the Audible site, is my favorite!
It's a novel. But the premise of the storyline offers many insights to people of faith and to doubters about our commonality. It's about spiritual truths coming from diverse sources. It's about the value of travel to unlock new experiences, feelings, friendships, and enlightenment.
I highly recommend this book!

I bought this because I liked the Breakfast with Buddha series so much. I found the Dalai Lana's and Francis' characters to be cartoonist and childish. I also didn't like how they were ancillary parts in what was essentially Paulo and Rosa's story. Even the narrator's attempt at their accents missed the mark. I'm glad everyone else enjoyed it. Maybe it just wasn't for me. ¯\_(ツ)_/¯

Not as good as the Breakfast/Lunch/Dinner trilogy

I am only one hour and half into the story and spent the last thirty minutes debating whether to return this book while listening to it so far. It's mainly the narration that I don't enjoy, and the story too, which, so far, doesn't show the depth of the trilogy I enjoyed so much.

It's very hard to find narrators that can do accents very well. And, in this case the narrator's accent for the Dalai Lama would be fine for a character that is Japanese speaking English, but is definitely off for a portrayal of the Dalai Lama. I've watched many documentaries with the Dalai Lama speaking, or other Tibetans speaking, and have listened to other fiction audio books that had better narrator accents for Tibetans, so it is possible to do it better.

With the wrong accent irritating me, and the story still not having taken off after an hour and a half, I skipped forward to sample the second half of the book. Nope, nothing to hook me there.

Authors and narrators can do some really good work, but not everything pleases every person, and rather than spend my time being irritated and disappointed, I will return this book. I see there are glowing reviews, so this book just wasn't right for me.

Very inspiring and full of hope. Very well written performed. The story is full of love.

Excellent. A beautiful offering. Not to be missed.a deep awareness by the author of All That Is.

I have been waiting for this story to be released and I am so happy it was put as the author promised. I hope the story continues and we see how the children end up as adults. Love the adventure and rich characters bring to us. Excellent read!

A great sequel to the Buddha books!

After reading Breakfast/Lunch/Dinner with Buddha, I was hungry for more. DELIGHT helped me continue the journey, which ends in a clever way. However, PJ Ochlan's narration was a bit too sarcastic in tone, for me.

Could not get past narrator

The story was passable: good concept, but painfully predictable. The narrator’s sing-song tonality and poor imitation- no, awful!!! - portrayal of the Dalai Lama seemed disrespectful at best. Listened for 4 hours and hated it!