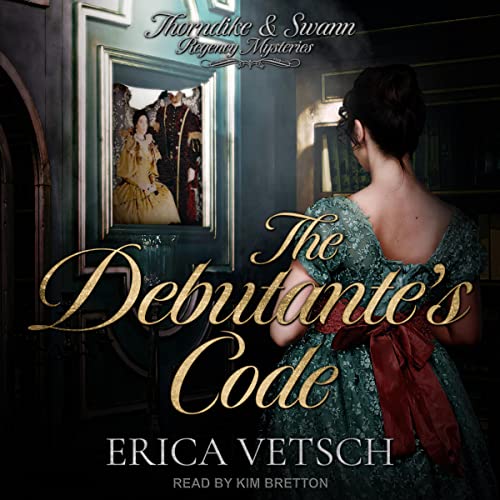 By: Erica Vetsch
Narrated by: Kim Bretton
Try for £0.00

Newly returned from finishing school, Lady Juliette Thorndike is ready to debut in London society. Due to her years away, she hasn't spent much time with her parents, and sees them only as the flighty, dilettante couple the other nobles love. But when they disappear, she discovers she never really knew them at all. They've been living double lives as government spies - and they're only the latest in a long history of espionage that is the family's legacy.

Now Lady Juliette is determined to continue their work. Mentored by her uncle, she plunges into the dangerous world of spy craft. From the glittering ballrooms of London to the fox hunts, regattas, and soirees of country high society, she must chase down hidden clues, solve the mysterious code her parents left behind, and stay out of danger. All the while, she has to keep her endeavors a secret from her best friend and her suitors - not to mention nosy, irritatingly handsome Bow Street runner Daniel Swann, who suspects her of a daring theft.

Can Lady Juliette outwit her enemies and complete her parents' last mission? Or will it lead her to a terrible end?

What listeners say about The Debutante's Code

Kept my interest all through the book. The many twists and turns made this book one of my favorites.

Absolutely loved this! Lots of mystery solving and adventure with a very 'Pride and prejudice' feel. Very clean.
Loved it! One of the BEST books!

This is a suspenseful, intriguing story, well written and deserving of a better narrator! As some of the characters are from previous novels, the narrator should have portrayed their characters as they were in previous novels. The silly, pompous way she portrayed members of the nobility detracted much from an otherwise great story. The story was worth listening to, even though the narrator made much of it tedious.

Ok plot and characters. A nascent romance that will probably be developed in further books. But our heroine keeps calling on god or wondering if she is serving god. I was looking for a story, not a sermon.

Wow! This was an excellent mystery.
I felt so bad for Juliette, coming home after being away for so long, only to find her parents gone. I really liked Uncle Bertie. He's quite a character and helped her grow in unexpected ways.
I like Daniel Swann too. The crimes he is tasked to solve are quite tricky.
I listened to the Audible and read along on my Kindle. The narrator is very good.
I cannot wait to read more mysteries with Lady Juliette and Detective Swann!

Hurry and send the next in the series!!!!

Enjoyed the book thoroughly! The characters were well thought out and well written. Some characters you like and others not so sure about but it made for more intrigue. I can't wait for the next book in the series!!

I’m not anti-religion but the praying seemed out of place and awkward. I enjoyed the story, although I figured out most of it easily, long before the ending. I’m just not sure if it’s worth trying the next book in the series if the random prayers continue.