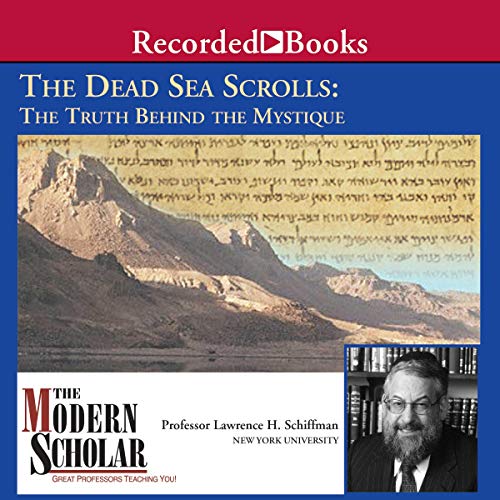 In this course, Professor Lawrence H. Schiffman presents the real Dead Sea Scrolls. In doing so, this widely published authority on Judaic studies imparts a clear understanding of what the Scrolls are, and even more importantly, what they are not. The discovery of the Scrolls is itself a thing of legend. As the story goes, a Bedouin boy discovered the Scrolls in a cave in 1947 while looking for a missing goat. But as Professor Schiffman explains, even this simple story is more complicated than it first appears. Indeed, everything about the Scrolls, from their long, torturous road to full publication to the contentious haggling over dating, meaning, and translation of the Scrolls, has been shrouded in controversy - so much so that even otherwise respected academics have succumbed to the "curse of the Scrolls" by committing serious errors in their Dead Sea Scrolls scholarship.

The Dead Sea Scrolls have been the subject of numerous sensationalistic articles in tabloid publications. All manner of people with outrageous theories, including apocalyptic groups and those who believe that the Scrolls contain some hidden message that will lead to man's salvation, have used the Scrolls to further their agenda. In these lectures, Professor Schiffman engages listeners with a fascinating explanation of the content of the Scrolls, the times in which the Scrolls were kept, and the Jewish sectarians who lived in the Dead Sea community. First and foremost, Professor Schiffman clarifies one of the biggest and most widespread misunderstandings about the Scrolls, which is simply this: The Scrolls were not Christian texts nor do they contain any references to Jesus or John the Baptist. The Scrolls, in fact, pre-dated Christianity by many years. By dispersing this myth of the Scrolls as Christian texts, the invaluable insights the Scrolls provide can finally be appreciated.

What listeners say about The Dead Sea Scrolls

the scrolls- dehyped and demystified

The scrolls have been one of those mysteries I've wanted to learn more about. This book more than does the job!
The author does well to fill you in on all the background such as how the scrolls were discovered and relevant Jewish (and a little Christian) history. With many new terms and names to keep track of, it can be challenging to follow at times.
Unfortunately the scrolls are less mysterious than the media has hyped them up to be. For example they discuss issues of ritual purity of vessels and other Jewish-law differences of opinion hence you may be left feeling deflated if you were expecting something more dramatic! That said there is a lot more to the scrolls which he does cover. He also covers a lot of the fanciful ideas attested to the scrolls and Jewish-Christian debates about the scrolls and their relevance Jesus (if any) that have been presented in the media.
The scrolls for me are a mystery no more!

Compelling and erudite series of lectures

Presented in an informal direct style, the lectures are easy to follow and at times entertaining and amusing. In spite of this they reflect very deep knowledge and relable scholarly research that increases the appeal of the subject. They are delivered with clarity and engaging enthusiasm. I have thoroughly enjoyed them and will seek more knowledge from this this eminent professor

Prof. Lawrence H Schiffman gives an excellent well-balanced and honest overview of the famous Dead Sea Scrolls, the situation surrounding its discovery and its meaning to Western Civilisation in general and to Judaism and Christianity in particular in 14 lectures. Be sure to download the PDF file with the course guide to gain the most from this presentation. The course could probably have been called "Qumran 101."

Except for his enthusiasm and ear catching presentation, Schiffman came over very knowledgeable and was able to convince me why he is one of the leading scholars on the Qumran community and its library as well as Second Temple Judaism. During the course he is not scared to share and even advocate his own views on certain important issues, i.e. the Sadducee origin of the Qumran community. He was also able to argue his views clearly (although, I don't buy the Sadducee origin of the Qumran sect).

Schiffman always balances his own hypotheses with the majority stance of scholars, thus informing the listener what we can say responsibly about the Scrolls and the mystique surrounding it. He also debunks some of the more outrageous speculation surrounding the Dead Sea Scrolls very effectively.

What I liked a lot about this course is that the relevant material (the scrolls' contents, Josephus, Philo, archaeological artefacts etc.) are the basis from which Schiffman presents his arguments. He engages the scrolls and other material to let it speak as far as possible for itself. I didn't get the idea that his Jewishness clouded his critical academical scholarship. He doesn't force a Jewish agenda. He presents sensitive information not only as objective as possible but also with the necessary empathy and clarity. I was pleasantly surprised by his approach.

Of "The Modern Scholar" lecture series that I have listened to so far, I find prof. Schiffman's lectures on the Dead Sea Scrolls not only informative and well-balanced but some of the best so far. I would recommend these easy-to-follow lectures to anyone interested in the enigma of the Dead Scrolls.

His commentary on 1 and 2 Maccabees in the HarperCollins Bible Commentary is also to be recommended for further background reading to the lay person.

I'm sure you will not regret buying and listening to this course created and lead by Professor Lawrence H. Schiffman. In 14 Lectures, narrated by the professor himself, one can listen about the most important archaeological discovery of XX century. For those who do not know, in 1947 in a place west to Dead Sea, called Qumran, the first from a set of ancient manuscripts was found. The set was later called The Dead Sea Scrolls. Over next almost 20 years, hundreds of manuscripts, mostly - parts of scrolls were identified. For long time the discovery was a bit secretive, with lots of all sorts of conspiracy theories about them. None of them proved true. And this is what Lawrence Schiffman says - this discovery is one of the greatest, but there is nothing that could "prove" or "disprove" religious believes !!!
The course author makes some interesting hypothesis about Qumran and its community. For example, contrary to popular views telling of Essenes as the Qumran community inhabitants, he convinces the listeners that it was rather created by a group of pious, priestly Sadducees who supposedly distances themselves from the practices of the Temple in Jerusalem.
What is very important in this lecture is the objectivity of its teaching. The author clearly states, that, though the discovery is very important, it does not question or break any of existing religious traditions, including Judaism and Christianity. However, shedding light on the most interesting period in Judaism's history - i.e. the transformation from the Temple periods to later rabbinic or Talmudic period, it also sheds light on early Christian history.

The lecture ends with interesting summary of Dead Sea Scrolls presence in today's public culture, and this presence is said to bring a very positive effect on bringing closer the largest and oldest monotheistic religions of the world....

WOW! The first few chapters should me made into a movie...it had me hanging onto the edge of my seat.The rest was the book was very detailed for those looking for a deep look into the scrolls and their background. I thought the entire presentation was awesome.

I think a better title would have been: The History surrounding the Dead Sea Scrolls. I enjoyed this course and learned a few things in the process. Prof. Schiffman spoke on the history leading up to, during, and after the scrolls were found. While this does not take away from the course in anyway, I was expecting more information about the scrolls. I had never thought to look into the history surrounding the scrolls before. If someone is thinking that this course is solely about the scrolls then they may be disappointed. I have another course on the Dead Sea Scrolls from another company and I am eager to see what they talk about and see how the different courses compare. All in all a good course to include in your library if you are in anyway interested in the Dead Sea Scrolls.

I found this to be a very unorganized and unsatisfying course. Although the author seems to be a well-recognized authority on the scrolls, his discussion of the material and the course itself is not well organized and his presentation style and voice are very wearing. I would not recommend this course to anyone.

The recording quality is fine. But, I think the subject matter is not for a person with mild interest in the topic. Very interested scholars may enjoy this, but I found it easy to allow my mind to drift off on to other thoughts while I was listening and frequently had to play the lectures several times.

I have enjoyed other works in this series, but this one just did not hold my attention for long. In fact, I gave up listening to it about half through.

I enjoyed this series of lectures even if biblical scholarship is not one of my main interests. It helps if you have a little Old Testament understanding when listening to these lectures. This book was worth the money but I'm not sure I would buy it twice.

A good introduction into The Dead Sea Scrolls

Fourteen lectures about the Dead Sea Scrolls by a professor who has been actively researching in this field for many years. He is passionate about the subject and has interesting theories and suggestions regarding many topics, but, unlike some other Modern Scholar lecturers, Lawrence H. Schiffman always takes care mentioning competing theories instead of stating his own position wrapped into "it is obvious that" or "as everybody knows".

I didn't enjoy this audiobook

I thought I would get a reading or a review of the writings from the scrolls themselves. I didn't know I was buying a 'lecture' - very disappointed with the marketing of this audiobook. It's not what I wanted.

The professor is very knowledgeable - I would enroll in his course. However, I wanted more of the writings.

I found the information extreamly helpful in broading my understanding of first century Christianity and the three questions I believed they struggled with, i.e. Who was Jesus, what was his message, and whom was it for.