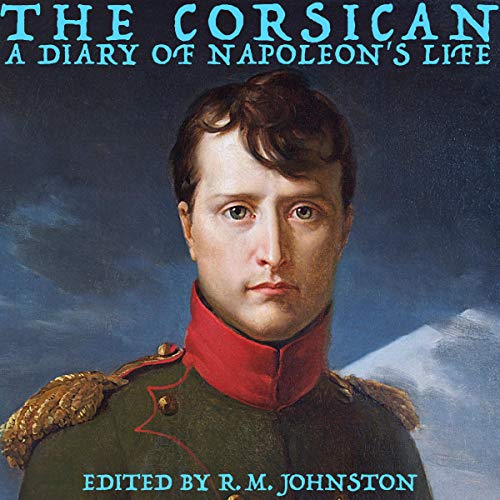 The Corsican: A Diary of Napoleon's Life

These are entirely Napoleon Bonaparte's own words, written and spoken, and collected in journal form. A particular focus here has been put on Napoleon's writings that pertain to military and state matters. The dates in terms of the revolutionary calendar have been modernized, and names and titles of individuals mentioned have been maintained with no attempt at uniformity. This production was begun on the 250th year of Napoleon's birth.

What listeners say about The Corsican: A Diary of Napoleon's Life

Wasn't sure what to make of this when I first started, but the more I listened the more enthralled I became. If you like your Napoleonic history you'll love this.

A true window into the life of one of the most fascinating characters of all history. Kudos to the narrator... well done

I expected a different material when I started, but it was my fault. For what it is, a diary, it is a great material especially in the last hours of the book.

And narration - just fantastic! I don't think even Napoleon himself reading this material would sound so "Napoleonic". Bravo Jack Chekijian!

A Splendid yet Opinionated Collection of Accounts

This recording is a compilation of not only the diaries of Napoleon Bonaparte but also his letters and official decrees, and it has some righteous quotes such as "Death is nothing, but to live defeated and inglorious is to die daily." Sadly, that outcome summarized the final days of Bonaparte whose last thought and last entry was on glorious victory in death. Some of his claims were a bit delusional; for example, he wrote "Nobody is more pacifist than I am," even though the Napoleonic wars were more proactive than reactive, but he was otherwise a rather accountable, inquisitive, and reflexive person.

In his letter to the Russian Czar, the French Emperor conveyed his disgust with the burning of Moscow and wrote that he and his soldiers had killed as many arsonists as they could, and Bonaparte considered his friendship with Alexander as still partially valid despite the invasion. Napoleon was an astute scholar of history but failed to remind himself that the world had barely changed itself between the Swedish invasion of 1707-09 and the contemporary year of 1812 and no way as much as it would change itself between then and 1941. Sure, he had suffered a heavy loss to the British Navy at Trafalgar in 1805, but Great Britain needed its navy to make war with the United States in 1812, so he did ought to learn from British success at sea and then strike while the iron was hot. Unfortunately, that idea was going to come to him a little too late and while exiled on St. Helena: "I would have been as William the [Norman] Conqueror [in 1066]."

The French invasion of Russia, however, serves as a valuable lesson in warfare, planning, and of course, humility because even the greatest plan of attack needs a greater plan of escape. Similarly, one often thinks that weightlifting strength comes from the positive motion or "hard part," but it actually comes from the negative motion or "easy part," that is, the lowering of the weight. Napoleon's march into Russia had been fine, but his withdrawal out of Russia was disastrous. Back then, the fastest means of transportation were horseback and steamboat, yet no rivers ran from Eastern Europe to Moscow and the railroad had not existed before the mid-1800s, and in warfare one needs to have methods of rapid transportation for communication, resupply, reinforcements, and of course, casualty evacuation (CASEVAC). Bonaparte seemed to concern himself with CASEVAC in a letter to one of his generals as he ordered or at least recommended the evacuation of 6,000 wounded soldiers. Clearly, he had not foreseen the scorched-earth abandonment of Moscow and had intended to spend the winter in there, but his forward march lasted for roughly three months, so if he had launched his attack three or four months sooner than when he did, he should have enough time to safely extract himself and others before the snow would have fallen in October.

In his closing entries, the exiled emperor asserted that the key ingredient for success in battle is "common sense," but that claim is ridiculous. If it were true, it would mean that two opposing generals would be mentally equal to each other, and that each would think no better than the other, and that each could predict the other. It would also mean that the enemies of Napoleon defeated him because they had used the discretion that had been more communally accessible than the kind that Napoleon had used. Sadly, I have not read the original French text, but the translations of the phrases good sense and common sense are "sens bon" and "sens commun," but good sense is NOT common property and certainly not common practice. Why? Because the human mind is lazy and not logical, and even super smart people had made oversights that in hindsight seemed perfectly simple, so the mind needs to train itself to think logically and to develop what Sherlock Holmes calls "systemized common sense."

Furthermore, many if not most people will always bite the hand that feeds them thereby disprove the communal nature of good sense. The emperor wrote near the beginning of the book "Chance will always remain a sealed mystery to average minds," and yes, the realm of possibility shall always remain closed because the average-minded will not bother themselves to entertain it with good-sense foresight and contingency planning, so is it possible that Bonaparte unwittingly incriminated himself as average-minded and of communal judgement?

Elsewhere, the translator did a surprisingly good job back in 1910, and the narrator whose accent sounds somewhat French pronounced the names and places perfectly well even though he sounded as if he were reading out of a law book, so I found myself becoming drowsy behind the wheel. L'empereur had been able to benefit from aerial reconnaissance before his forces fought at Waterloo, so what could he have done if he were born one or two centuries later?