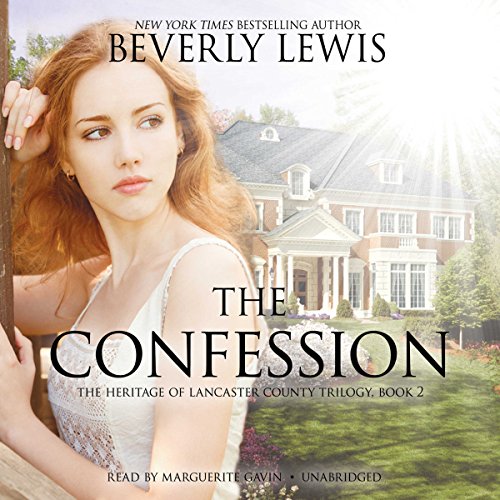 By: Beverly Lewis
Narrated by: Marguerite Gavin
Try for £0.00

Katie Lapp's identity has been shattered ever since she was painfully torn from her close-knit community in the frightening ordeal called the shunning. Katie, now Katherine Mayfield, sets out to find the ailing birth mother she has never known.

Her journey takes her to places where electric lights and telephones set Katherine's mind whirling with "fancy" things and where she stumbles into a world of betrayal, where the plain garb of the Amish is misused to disguise an evil conspiracy. Alone in a world of strangers, she longs only for the gentle embrace of the woman she hopes to call Mother.

The Confession is the second book in a trilogy that recreates the simple life of the Amish. Its themes of hope and reconciliation show us that even when we think we are far away, God's love is always present.

What listeners say about The Confession

This The Confession is just wonderful

The continuation of the Shunning it is simply enthralling , touching and again beautifully narrated . I can’t wait to hear the next book , The Reckoning .

I am drawn to the relaxing yet compelling nature of Beverly Lewis's books. Something very intriguing about the Amish way of life, the simplicity and total devotion to their faith. Really a refreshing listen.

I saw the first in this trilogy as a TV movie. I thought it was pretty good and decided to see what it was like to pick up a story in the second book after starting with the movie. I wasn't disappointed even though the movie wasn't that fresh in my mind. The author always seems to spin a good story and bring the Amish to life. Was this the greatest book ever written, no, but it was entertaining and I'm sure I'll listen to the thired story.

I enjoyed listening to this book. It had continued character development, warmth, and meaningful perspectives into the deeper beliefs of Amish traditions compared with biblical faith. I Lewis’s writing from three different peoples’ perspectives, comparing and contrasting some shared themes with completely different circumstances.
The plot may seem predictable, though it didn’t stop me from enjoying it and even getting teary at times.
I enjoyed the reader, who able to artistically illustrate Katherine’s identity by slipping in and out of Amish accents. She also builds and communicates energy and excitement as well. I’d recommend this!

I enjoyed this sequel. I really wanted to know what happened to Katie and her birth mother. Interested in reading book 3

Loving this series. The author has a great way of holding my interest and finish wanting more. The narration is very good.

I agree with some of other reviewers that this book was a little drawn out. Story line was good but after a while you can lose focus. I am interested in hearing the final book to see how the story line goes from here. Not sure how it all wraps up.

Such a wonderful story, and it’s great to listen to on audible! Beverly Lewis you did it again! 😊 Thank you! 🤗

Pennsylvania Dutch is German (Deutsch), the story keeps interchanging German and Dutch. The Dutch (from the Netherlands) have their own language, Dutch.

A wonderful continuation of the story. So heartfelt and wonderful plot. I can’t wait to read the next book.

I truly am enjoying this trilogy. This being the second in the series. The reading was well done, as the woman reading changes her voice and tone depending on the character. The first in this series is called the Shunning. It’s a great feel good story with Christian references.