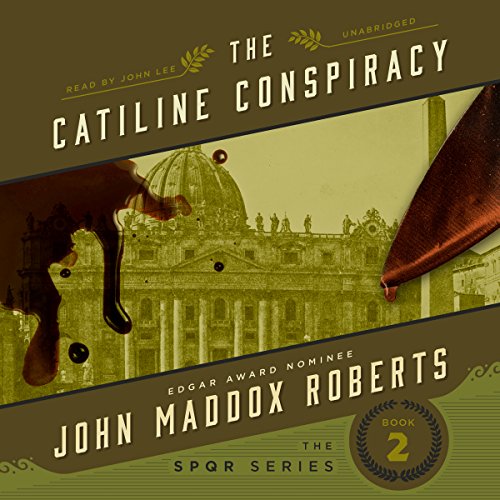 It was a summer of glorious triumph for the mighty Roman Republic. Her invincible legions had brought all foreign enemies to their knees. But in Rome there was no peace. The streets were flooded with the blood of murdered citizens, and there were rumors of more atrocities to come. Decius Caecilius Metellus the Younger was convinced a conspiracy existed to overthrow the government, a sinister cabal that could only be destroyed from within. But admission into the traitorous society of evil carried a grim price: the life of Decius' closest friend - and maybe his own.

The author's masterful writing and impeccable faithfulness to historical fact join together to create a grippingly suspenseful tale of murder and conspiracy in ancient Rome.

What listeners say about The Catiline Conspiracy

An excellent take on the conspiracy of Catilina

This series is excellent - John Maddox Roberts had captured the drama and tragedy of the events that cause the fall of the Roman republic, as witnessed by Decius Metellus, a sort of 1st century BC detective.

What's with the new 'book cover'?

The book is set in 1st Century BC Rome.. What's with the Building? I preferred the old Book Cover, it was more appropriate to the book ie fun.

Moreover, the precious narrator was better at this book.

"I am always serious", he said, seriously.

Although written in his usual sardonic style, and with grand Roman colour filled with intrigue and murder, for some reason John Maddox Robert's second book in this excellent series failed to hold my attention in the same way as did his later stories. And towards the end I found my attention wandering. There are still remarkably engaging sections, such as the race to get a sacrificial horse head safely home through crowds determine to stop Decius in his desperate flight, and the reader is offered many little tidbits of what life was like in ancient Rome towards the end of the Republic. The story itself should have been thrilling but...
The narrator, John Lee, was good and had a suitable haughtiness as he voiced the recollections of these times in the person of the, now, much older, Decius Caecilius Metellus looking back on his youthful indiscretions.

So, not a favourite but still worth reading, however.

once again Audible find it difficult to get a narrator to just read the material normally.

Mr Lee has a good English Accent so why is he reading this as if he is reading the shipping forecast or the Football results?

He reads in oddly spaced short clipped sentences with no natural flow.

It's not an easy listen.

is it Deliberate?, does he think that's how Roman's spoke?.
The story is one of the most intriguing of the Roman Republic but Mr Lee has vastly reduced the enjoyment.

You can get weird narration on LibriVox, that's why it's free. I expect better from a subscription service.

It took me a while to get used to the narrator as I had listened to the previous story with a different narrator, but was fine with it by the second chapter. There were lots of historical facts and real-life characters woven into the story, and I found it difficult to take in everything, but it's a good way to educate and entertain at the same time. Story wasn't too long at seven hours so I'm looking forward to delving into more books from the series.

I was looking forward to this book but the weird naration spoiled it for me. The narator sounded as if he was reading a particularly boring newspaper report. Very strange inflections. Couldn't get past the 2nd chapter

I like the narrator, although he could do with being more animated at times.
The story was incredibly predictable and this is only the second SQPR I've listened to. Thank you for providing two on included. I won't be buying more though.

This is history written as a novel and is accurate as far as i know, having heard this particular episode of Republican Roman life a few times from other authors. I have to admit that my appetite for this particular era of history has been spoiled by Colleen McCullough's amazing Masters of Rome novels which sadly are not available on audible. Still, this author gives a good narrative even if it isn't very stirring or exciting or suspenseful. I'd listen to other works by this author who certainly writes well and fluently.

Another great historical thriller - a lot more fun than a straight narrative of the Cataline conspiracy, with plenty of details on daily Roman life woven in.

John Lee adds so much

A sly voice adds so much to his reading of the series and makes it from a historical whodunnit into a wry tale and a terrific main character slipping through Rome’s intrigues. Loved it. And it’s predecessor.