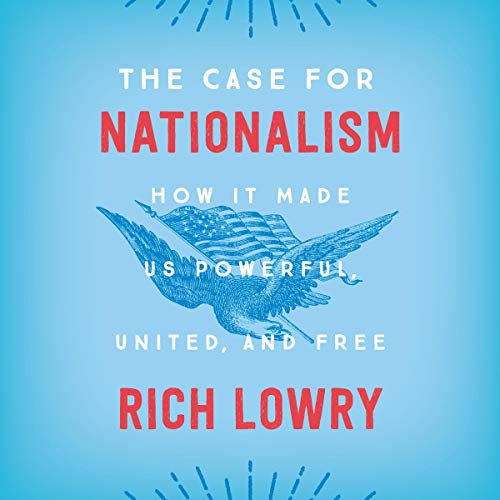 The Case for Nationalism

It is one of our most honored clichés that America is an idea and not a nation. This is false. America is indisputably a nation, and one that desperately needs to protect its interests, its borders, and its identity.

The Brexit vote and the election of Donald Trump swept nationalism to the forefront of the political debate. This is a good thing. Nationalism is usually assumed to be a dirty word, but it is a foundation of democratic self-government and of international peace.

National Review editor Rich Lowry refutes critics on left and the right, reclaiming the term "nationalism" from those who equate it with racism, militarism, and fascism. He explains how nationalism is an American tradition, a thread that runs through such diverse leaders as Alexander Hamilton, Teddy Roosevelt, Martin Luther King, Jr., and Ronald Reagan.

In The Case for Nationalism, Lowry explains how nationalism was central to the American Project. It fueled the American Revolution and the ratification of the Constitution. It preserved the country during the Civil War. It led to the expansion of the American nation’s territory and power, and eventually to our invaluable contribution to creating an international system of self-governing nations.

It’s time to recover a healthy American nationalism, and especially a cultural nationalism that insists on the assimilation of immigrants and that protects our history, civic rituals, and traditions, which are under constant threat. At a time in which our nation is plagued by self-doubt and self-criticism, The Case for Nationalism offers a path for America to regain its national self-confidence and achieve continued greatness.

What listeners say about The Case for Nationalism

How many times have you heard that this is “a nation of immigrants”? Lowry has a chapter destroying that cliche. If you don’t know the truth about the Statue of Liberty or how immigration numbers have gone up or down through history, this book explains it. It is especially good and disturbing on the erosion of assimilation in this country, and the need to preserve the English language. Let’s hope it makes a difference.

I recommend it for sure. Very boring reader though

this book might just change your mind, but the guy reading it is dull.

A case for nationalism as a neccisary and unifying force rather than an exclusionary one.