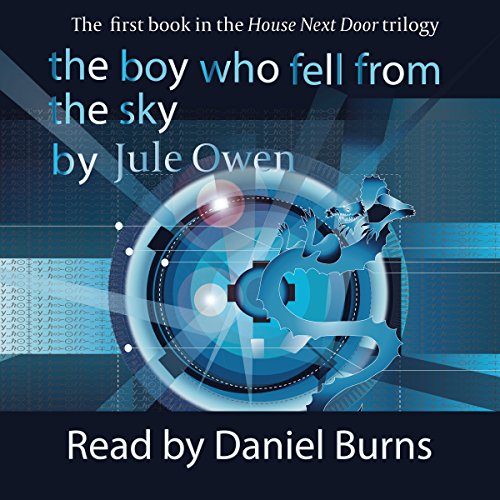 The Boy Who Fell from the Sky

The world is falling apart in 2055. Floods have devastated London on the eve of the First Space War. With the city locked down, 16-year-old Mathew Erlang is confined to his house with only his cat, his robot and his holographic dragons for company.

Desperate for a distraction from the chaos around him, Mathew becomes fascinated by his peculiar and reclusive neighbour, August Lestrange. Mathew begins to investigate Mr. Lestrange, turning to the virtual world of the Nexus and Blackweb for answers. But as he digs deeper, Mathew realises that Mr. Lestrange doesn't seem quite human.

When Mathew accidentally finds himself trapped in Lestrange's house, he opens a door and falls 400 years into the future. Unwittingly, he starts to destabilise the course of human history.

The Boy Who Fell from the Sky delves into a future where climate change and technology have transformed the world. It is the first book in The House Next Door trilogy, a young adult dystopian science fiction action adventure.

What listeners say about The Boy Who Fell from the Sky

Classic in the making

Would you consider the audio edition of The Boy Who Fell from the Sky to be better than the print version?

I very much enjoyed listening to the audio version of the story, and I think the performer is well suited to the audience.

This is a wonderfully imagined and believable dystopian future. The author is clearly an expert futurologist and, whilst the environmental and political elements of the story are alarming, she provides a wonderful counterpoint through a virtual world created by her characters.

Have you listened to any of Daniel Burns’s other performances? How does this one compare?

My first time listening to this peformer

Curiosity killed the cat, but who can slay a dragon?

no ending and no vol 2

I did not enjoy the narrator but to not even end? where is the next book? There's no wrap up of anything, not even a bad ending, more like the author just stopped writing.

Owen's vision of the future in The Boy Who Fell From the Sky is dominated by global warming, cool tech, and all the fascist fun that cool tech can yield (the government is tracking your bio-ID now, y'all). Some sections are not too subtle with the exposition, but the world is still remarkably detailed and complex.

Matthew Erlang takes us through this new world with a flair for engineering, a dash of social awkwardness, and a growing crush on a classical pianist. Every so often I feel the urge to yell at him like I would at an actor in a horror movie, but I can't help but enjoy Owen's characterization.

The audiobook transported me into this strange new world as completely as any good holo-film. I have a special soft spot for the glorious voices of the Russian characters and of course for O'Malley the cat.

I'm highly anticipating diving in to the sequels next!