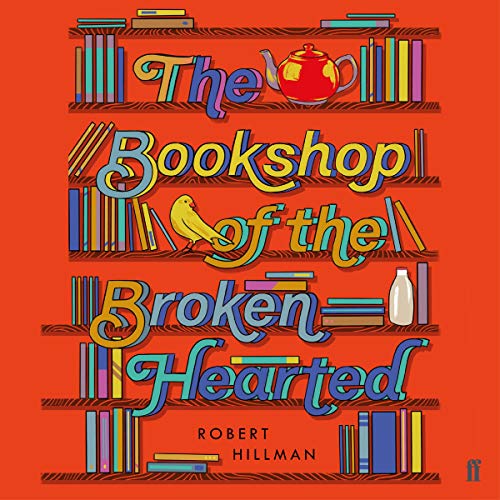 The Bookshop of the Broken Hearted

By: Robert Hillman
Narrated by: Julian Pulvermacher
Try for £0.00

Tom Hope doesn't chase rainbows. He does his best on the farm - he milks the cows, harvests the apples, looks after the sheep - but Tom's been lonely since Trudy left, taking little Peter with her to go join the holy rollers.

Enter Hannah Babel, quixotic smalltown bookseller: the second Jew - and the most vivid person - Tom has ever met. When she asks him to help her build Australia's most beautiful bookshop, Tom dares to believe they could make each other happy.

But it is 1968: 24 years since Hannah and her own little boy arrived at Auschwitz. Tom Hope is taking on a battle with heartbreak he can barely even begin to imagine.

What listeners say about The Bookshop of the Broken Hearted

I LOVED this - it's an unsentimental, tough, heart-breaking, heart-warming story about the power of love.

Tom is a sheep farmer in Australia leading his lonely, hard, sometimes brutal life tending his "woollies". His new wife Trudy unlocks his heart, only to shatter it by leaving him twice, the second time taking with her to Jesus Camp little Peter, the product of her brief affair, the child Tom loved above all else. Life is beyond desolate and painful for Tom until a seemingly impossible passionate love develops between Tom and Hannah, a spirited, eccentric Hungarian Jewish woman older than himself, who has the apparently crazy ambition of opening a book shop in this culturally bleak area of Australia. Hannah had suffered terrible unbearable loss in the WW2 concentration camps, including having her only beloved child wrenched from her.

To detail the convolutions of this heart-stopping story would spoil it. Enough to say that the painful, treacherous, delicate process of regeneration takes tenuous root. It's a serious, rough, rugged story with murder, extreme cruelty administered in the name of Jesus, and the annihilation of Jewish people. Amidst all this is the uplifting story of Tom and Hannah which I didn't want to end.

The narration adds another dimension with the Australian and East European accents, but I gave it only a 4 because the sentences are weighted in a curious and repetitive way.

In these dire times, we need books like these to lose ourselves in. Get listening!

I did not like the book. Badly written, ridiculous characters, tedious dialogues.
Writing about Auschwitz doesn't automatically make a book deep. I would never recommend this book to anyone.