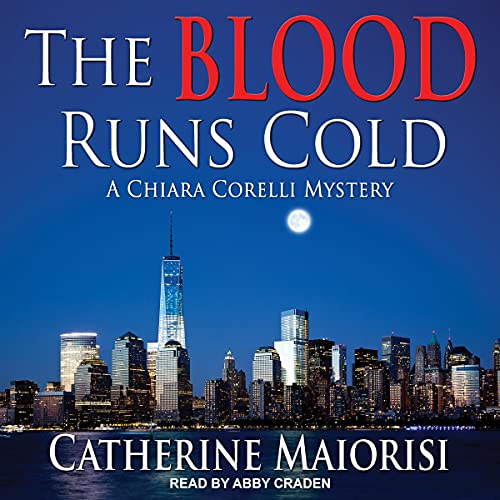 Still battling each other and the blue wall, NYPD detectives Chiara Corelli and P. J. Parker catch a new murder case. The victim, a gay man, is posed with a rosary in his hands, the smell of incense in the air, and Gregorian chants playing in the background.

While Corelli and Parker search for leads, Kate Burke, the lesbian speaker of the city council, asks for an update on the investigation. Thinking Burke is playing politics, Corelli ignores the request. In the meantime, two more bodies are found, both laid out in the same way.

Pressured by the chief, Corelli goes to Kate's office, where a photograph of the speaker with a group of friends catches her eye. Corelli recognizes the three victims and, to her horror, three others. Suddenly the case becomes personal.

Fearing a serial killer is picking off the people in the photograph, fearing the next victim will be someone she loves, Corelli races to find the murderer before he kills again.

What listeners say about The Blood Runs Cold

This is as good as the first book with a nice follow through in the character development as well as great murder mystery. I’m immediately onto the next!

very good storyline and narration but way too slow

Took way too long to get going, and zero build up, then just ended.

Even better than the last part!

Really enjoyed this one and can't wait to listen to the next part! Narration awesome again!

Is formulaic but entertaining

This is the second book in the series I’ve read and I’m enjoying it pretty much. Main character is tough but relatable. The lesbian angle is interesting—seeing what it’s like to live in a world where men aren’t the ones you want. For some reason the author makes chiara wealthy. I don’t like it when authors make a big deal about a characters financial situation—I mean, who cares? She seems to think they have to be loaded in order to be considered successful—New York values for sure. So this is the second book where a figure who dresses in black is always lurking around the crime scene and turns out to be the perp. That’s the formulaic part. Also this is the third series I’ve read where there is a big conservative Italian family who tries to push their kids back into some kind of 1950s type social culture. Is there any other way to be Italian in New York? I’ve read so many of these all the Italian families blur together.

More of this. Loved it! The characters are great, loved the plot and the narration is excellent. This book is highly recommended.

Really enjoyed all of it. Story line was excellent, although the police line every morning was a bit over the top, but then I am not in that position so I don't know. I loved the narration. Can't wait for the next one.

Gripping series, but not quite five stars

Wish the author wouldn’t have her main character take some absurd risks. Or kill off some nice people for the sake of the plot. Or have so much combative dialogue between main character and her homicide detective-in-training. So even though fast paced, edge of seat, it’s ruining my escapism goal to have the story be so constantly stressful. I would prefer some relaxing interludes in my fiction - where the characters are respectful to each other and enjoying their lives. Maybe, it’s a New York thing that there’s so much yelling and conflict?

Kept me on my toes..

With Abby Craden’s narration and a nail biting story, this was a pleasure to listen to.