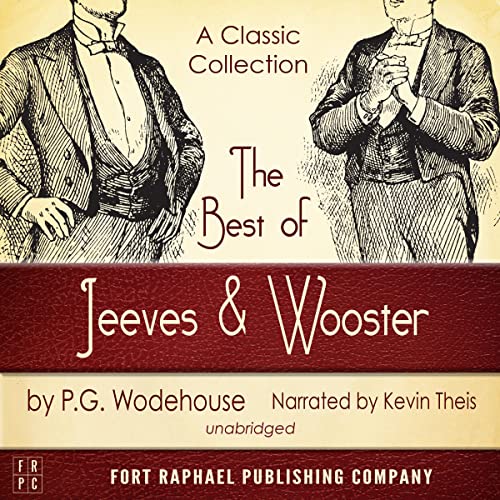 The Best of Jeeves and Wooster

P.G. Wodehouse, the master of British humor, produced dozens of books and hundreds of short stories in his long and prolific career. But, none of his creations captured the world's imagination quite as much as his bumbling, empty-headed, man-about-town Bertie Wooster and Bertie's faithful, knight-in-shining tuxedo Jeeves.

Collected here are eleven of Wodehouse's Jeeves and Wooster short stories (comprising all of the Jeeves tales from "Carry On, Jeeves" and "My Man Jeeves") as well as the complete novels Right Ho, Jeeves and The Inimitable Jeeves. Along with Jeeves and Bertie, we are introduced to an entire cast of beloved Wodehouse characters: Gussie Fink-Nottle, Madeline Bassett, Bingo Little, James "Corky" Corcoran, Tuppy and Honoria Glossop, Rockmetteller Todd, and the terrifying and bombastic Aunt Agatha. This collection even contains the one-and-only story narrated by Jeeves himself!

This entire, one-of-a-kind collection is presented here in its original and unabridged form.

What listeners say about The Best of Jeeves and Wooster

Terrible reading - if that’s the word. Rather shouty grating voice. I couldn’t bear to listen for more than a couple of minutes. Ruins what are amusing stories. Don’t buy.

Why get an American actor to voice a particularly English role? Dreadful and unlistenable to.

These stories have been read by an actor who cannot speak English. His diction is nothing like that of Bertie Wooster! I demand my money back!

Can't believe that I wasted a credit on this collection. I should have definitely sampled it first. My only issue, and it's a big one, is the Narrator. Absolute Rubbish !!! Stick with the Jonathan Cecil series, and you'll be much happier.

Don’t buy, the voice will give you headache.

I am asking myself why did I pouches the book. It’s terrible& want my refund.

Bertie and Jeeves are the best of Wodehouse's characters. His humor is the best.

A marvelous narrator of some classic works.

I must say, Mr Theis does a wonderful job of narration. His voice inflections capture the spirit of each character’s mood (and mood is so much of what makes Wodehouse so wonderful… peoples’ moods swing quite zippily from one to another extreme, like artists on a trapeze…)

I am thoroughly impressed with this narration.

I laughed aloud at how he read Bertie, as he was plaintively remarking on Jeeves’s delivery of “indeed, sir,” which he likened to implying the skepticism of an “Oh, yeah?” or a “Says you!”

The modernity of language is joyous in the extreme.