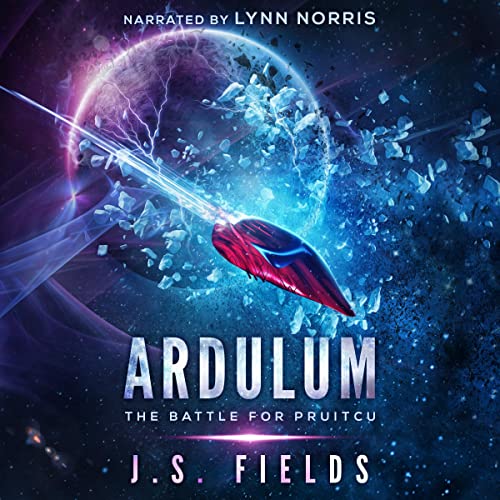 Fifteen years ago, Guard Four stood by and watched her friend, Atalant, be jettisoned into space for questioning their planet's religion.

Atalant should have died. Instead, she disappeared.

Consumed by guilt, Guard Four trawls space, hopping from spaceport to spaceport, hoping to find and bring Atalant home with exonerating evidence that Ardulum, the traveling planet her people worship, is no mystic deity.

At the edges of the known galaxy, Guard Four finds the shattered remains of a murdered world - a world of her genetic cousins, who could have provided the evidence she desperately seeks. Ardulum, it seems, is no fairy tale, but rather a bogeyman, set on destroying anyone who gets between it and its biological imperative to reproduce. And in its seat of governance rules Atalant - god to a planet she swore did not, could not, exist.

Guard Four must unravel Ardulan fact from myth to save her friend and the billions of other beings threatened by the Void - a tear in space created from Ardulum's most recent birthing event. But how does one bring a god of a killer planet home? And how is Guard Four supposed to stop the Void without giving it the only thing it wants - the destruction of Ardulum?

If you're looking for adventure and a touch of romance across time and space, filled with diverse alien species, deep emotions, and science fact and fiction, don't miss the next book in J.S. Field's Ardulum series!

“A masterful blend of space opera tropes and hard science fiction concepts…” (Seanan McGuire, author of Every Heart a Doorway)

What listeners say about The Battle for Pruitcu

I seem to remember Fields saying Third Don was the end of the story. Generally speaking, when an author doesn't want to continue a story, you can tell.

It seems to me the entire point of this book is to destroy a universe the author resented coming back to. Characters from the original trilogy are discarded. The story culminates in new characters flirting while an original character is dying in front of them.

The complete destruction of the narrative up to this point is celebrated.

I felt Fields' bitterness toward her own work throughout this novel and while there remains a chance for a future story of rebuilding to be excellent, I'm as hesitant to read it as Fields likely is tho write it.

If Third Don isn't where our story ends, I hope this is. Fields can move on to a work they like more, and apply the ample talents they possess to something new.

That all said, the story taken in its own terms is told well, Guard Four is a sympathetic and relatable new protagonist, and excluding the final chapter I feel her decisions and reactions make sense. In a world of poorly executed good ideas, this is a beautifully executed travesty.

I honestly wish they hadn't written this book, or perhaps held off on doing so until this story could've been told without the clear loathing Fields has for coming back to Ardulum.

I wasn't sure what to expect with this book but shifting the point of view from Adalant to Guard Four was really interesting. I may have come into the story wanting more of our main heroes, but it didn't take long for me to get sucked into Four's journey. The most interesting part for me was the character development that occurred once Adalant and Guard Four cross paths again. We learn about their past and alternate paths they could have taken.

I really enjoyed it!

I love this series so much

I’ve been fangirling over this series for a few years now and it looks like I won’t stop any time soon.

This is both the fifth Ardulum book and the first in a new trilogy. I guess it can be read as a standalone but honestly, I wouldn’t. You probably can enjoy this book on some level even without knowing the characters and the universe it’s set in, but you’d miss out on all the background. That said, if having to read the previous books seems overwhelming, jump in and get your fill of spaceships, flirting, nail polish, and sentient fungus.

Whenever I watch a Star Wars movie, the first notes of John Williams’ iconic music are enough to send me right back to the universe I love. I had the same feeling here when the audiobook started and I heard Lynn Norris begin the narration. These are my people, said my brain. The world J.S. Fields has created is incredibly rich, full of possibilities – for disaster, mostly -, of morally grey heroes, of spaceships with the best names: who needs a Millennium Falcon when you can have the I’m Wearing Shoes, Dammit!? I’m kidding, the Millennium Falcon will always have my heart, but I love these ships too. And the characters. Fields keeps putting their characters in perilous situations, with twist upon twist upon twist and a steady drip of humour to top it all.

I had so much fun listening to this audiobook I’m not even mad that the ending is wide open and I have to wait I don’t know how long to find out what happens next. As usual, Lynn Norris’s narration is on point. And if you get the book instead of or in addition to the audiobook, there’s a map, a timeline, and other resources that will help navigate the Ardulum universe.

Not the best of the books but it feeds the hunger

But many more questions generated. One of the characters was infuriating and got my high blood pressure going. I haven’t been annoyed with a character this bad in such a long time. I wanted to travel there and slap them. I wish there was more time between Adalant and M but I know new characters had to be introduced to keep the story going. Even if I hate the new characters.