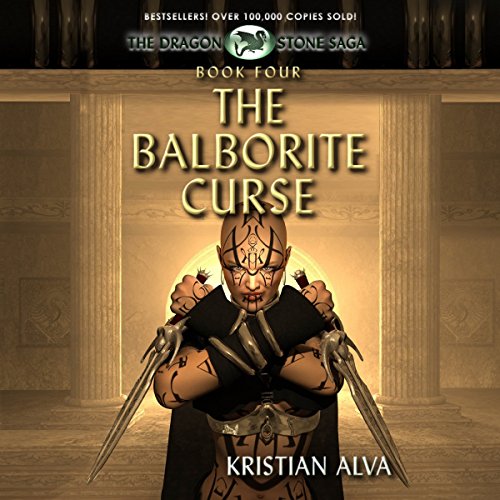 By: Kristian Alva
Narrated by: Adam Chase
Try for £0.00

After five years of fragile peace, things are changing rapidly. The dwarf kingdom is crumbling into civil war in the midst of the worst clan schism in a thousand years. With the clans weakened by infighting, the entire dwarf kingdom is vulnerable to attack.

Tallin Arai, the dragon rider, must leave the desert and the city he loves when someone puts a bounty on his head. He suspects the Balborites-a fanatic cult that trains deadly mageborn assassins. He sets out on a journey to save the dwarves from civil war and stop the Balborite assassins once and for all.

Is Tallin strong enough to save them all?

What listeners say about The Balborite Curse

Note: While this is Book 4 in the series, it works as a stand alone. It is like a first book in a second trilogy following characters we met in the first 3 books, but set years later.

This was another excellent installment in the Dragon Stone Saga. In this book, the main character is Tallin, the half-dwarf dragon rider and teacher to Elias from the first three books. He was a fascinating character in previous books and I was quite pleased to see him take center stage. The Balborite Curse takes place about 5 years after Book 3, Vosper’s Revenge. Peace has lasted, though it is threadbare and falling apart in places (such as the dwarf kingdoms). There are still few dragons and few riders. Sela is still head of the dragon riders but is soon called back from her vacation to help Tallin deal with yet one more merchant attempting to smuggle a deadly poison into the desert city. I sense these two may be headed for romance in future installments, but for this book there was just the merest hint of something more than friendship.

The interrogation of the merchant leads to more questions and sends Tallin on a small quest to ensure the safety of the merchant’s family, if they still live. Along the way, he visits Chua and Starclaw. Starclaw gives Duskeye (dragon companion to Tallin) some much needed advice on finding receptive dragon females, if any still live. Dragon reproduction is a taboo subject for humans and dragons to chat about, therefore there is much mystery as to why the dragons have not started reproducing again.

Peppered throughout Tallin’s narrative, we get to hang out with the Balborite assassin Skarekina (spelling?), who we have met in previous books. We get some flashbacks to how she became a deadly, accomplished assassin. She has a grudge against Tallin and it comes to blows! Skarekina is a wonderful villain because she is so competent!

We also learn a little about the Orcs and their civilization. It seems that everyone discounts and looks down on the Orcs, even some of our heroes. However, I get the feeling that the author has something more planned for us when it comes to the Orcs. I look forward to surprises later in the series. Towards the end, another dwarf magic user is introduced. She is elderly and practical and was a joy to see in action. I expect we will be seeing more of her in Book 5. I am already somewhat attached to her, so I really hope she doesn’t get killed any time soon.

I know I keep saying it about this series, but I feel each book is just a touch better than the last. I couldn’t be more satisfied with a fantasy series. The characters are interesting, the plot has more than one story line and is not horribly predictable, and the bad guys are complicated and often competent. Plus we then have these side issues going on (fighting dwarf kingdoms, the Orcs, dragon reproduction, etc.) that keep the reader wondering what will happen in the next installment. With this book in particular, we have what could be a very significant question to be answered in the next book and I am very much looking forward to giving it a listen.

Narration: Adam Chase continues to do a great job with this series. I love his blunt voice for Tallin. He voice for Starclaw (an older female dragon) was also great as I could just imagine her wrecked body and mild anger during her chat with Duskeye. Chase has the most wicked female laugh which he employs quite well while performing the assassin.

What I Liked: Tallin is a great character and totally deserves his own few books; the evil assassin is competent and wicked scary; more info on the dragons; possible new threat in the Orcs; a new awesome dwarf magic user is introduced.

What I Disliked: Nothing, this was a great book!

I envy the mind that creates this story. It is complex, yet provide simplicity in it's ability to tie some strings together. And this is done to the point where you are wishing and hoping for specific events occur when events occur that you never saw coming, yet they realistically make the story much more intriguing. The antagonist is now fully visible and colorful and easily despised. The back story on the this villainous character is hinted at and will most likely take shape in more detail in the next volume...can't wait to experience how that will be developed.