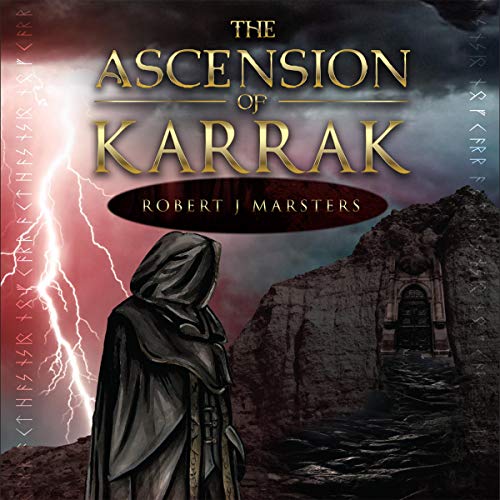 The Ascension of Karrak

As the clouds above darken, the world is on the brink of being torn apart by the sinister and sadistic Karrak Dunbar who, by cruel fate, is second in line to the throne of Borell.

With each passing day, Karrak’s strength grows, as he relentlessly pursues an ancient artefact known as The Elixian Soul - an artefact said in lore to have the power to increase black magic tenfold, the power of which could ultimately render him unstoppable.

Only Karrak’s older brother Jared stands in his way.

He strives with the aid of his mentor, a powerful wizard named Emnor, and an eclectic mix of unexpected alliances, to put an end to Karrak’s schemes.

Together, they must prevent the ascension of Karrak.

What listeners say about The Ascension of Karrak

Take a cup of Tolkien, a cup of Rowling, place In a Camelot size bowl with a twist of Herbert and a sprig of Pullman. Bake to perfection and sit back and relish in the deliciousness of this wonderful author and allow his mind to take you on an adventure worthy of any other author. Superb storyline, captivating characters, some you'll love some you'll despise, just as it should be. From strange creatures that run faster than the wind to super strong dwarf like loveable folk, to wizards and beautiful queens and shape shifting grumpy folk, to heroes. This is a journey of hope, new found friendships and allegiances all with one goal..(something you'll have to find out yourself). This is a story that appeals to young, old and all inbetween. Enough action and suspense to keep you hooked and perfect amount of humour to keep you smiling. I long for book 2. Move over authors, a new master wordsmith is here. 10/10.

I am reading the book at the moment and met the author at an event. so far it's a brilliant book witty, engaging and beautifully written. cannot wait to finish. then will listen to the audio.

wonderful story with involving characters. that carry the story.
feel different from a lot of stories. with a grounded sense of humour.