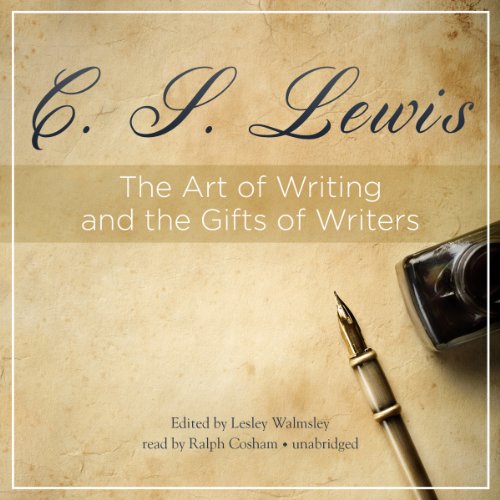 The Art of Writing and the Gifts of Writers

This volume of short essays and other pieces by C. S. Lewis is part of a larger collection, C. S. Lewis: Essay Collection and Other Short Pieces. In addition to his many books, letters, and poems, C. S. Lewis wrote a great number of essays and shorter pieces on various subjects. He wrote extensively on Christian theology and the defense of faith but also on ethical issues and the nature of literature and storytelling. Within these pages is a treasure trove of Lewis' reflections on diverse topics.

This is a fine audiobook. It is read with such clarity that one can almost imagine C.S. Lewis actually reading it. The narrator, the late Ralph Cosham reads with such humanity it brings great peace to the listener.

The topics covered are vast in scope and relevant to this day. I particularly liked the sections on Lewis' respectful and insightful thoughts on the works of Professor J.R.R. Tolkien. Particularly enjoyable are the episodes on the creative writing process.

Finally, this is an audiobook that deserves multiple listenings and will appeal to readers and writers with more than a passing interest in the craft.

As someone who used to love Lewis's specifically christian works, and as a then christian, have read most/all of them, loss of faith meant loss of Lewis. I was aware of his more secular writing - I had read Out of the Silent Planet as a boy, plus, later, the odd essay and the rest of the sci fi trilogy - but subsequently felt no desire to rediscover him as a writer of and about literature. The world of the unbeliever in general has left Lewis well behind. If you only know The Lion the Witch and the Wardrobe, moving once, now disgustingly tacky, you will regard him as irrevocably naff. Even the Tolkien connection cannot rescue him.
Now, after several decades, I am happy to look again at this mentor of my impressionable youth, and find him a man who has read, thought and lived widely. Now he has much to tell me about things that matter to me, being at last of more mature years.
This present book (you knew I would get to it eventually) contains some material nostalgically familiar from decades ago, but much that I had not previously read. And it is a joy and a delight.
The narration, although not mimicking either Lewis's actual voice or, impossibly, the voice in one's head when reading the books, hits exactly the required tone and so quickly fades away to leave just the words (indeed the meaning) to permeate the mind.
Please listen to this collection, not for nostalgia for a former favourite author, much less for the defence of a worn out faith - neither of which are greatly in evidence here - but for the application of a clear, sharp mind to a range of subjects, and in particular the world of literature. I find, for example, that he holds exactly the same view that I have formed of the merits of Animal Farm vs 1984. There again, he obstinately praises GK Chesterton, whom I simply despise - could it be that I am wrong?
Further, I have always avoided crime fiction, and therefore have read nothing of Dorothy L Sayers including her other work. His praise (in fact, eulogy) for this lady inspires me to find out what I've been missing.
So there it is. Let Lewis be your guide to a world of ideas previously outside or peripheral to your daily round. And forget about his pursuit of a faded religion. After all, Newton was an alchemist and yet his maths and science can take you to the moon and beyond.

What a beautiful and fascinating collection of essays, reviews, reactions and opinions, stunningly written and gorgeously read. As a very devoted fan of "The Lord or the Rings," I most enjoyed the texts discussing J.R.R. Tolkien and his work. Highly recommended!

A wonderful collections of Lewis lesser known work on writing and Literature. Everything from Science Fiction to Fairy Tales, and even a transcript of an conversation between Lewis and Martin Amis.

A Strategy for Collecting Lewis Essays on Audio

Collecting Lewis's essays in print as been problematic for a while because they are compiled in so many books that overlap in content. Now it appears that the audio world will follow suit. The good news is that having them at all, and read by such a good voice as Ralph Cosham's, is wonderful. The even better news is that so many of them, surely 85% or more, are now appearing on audio.The bad news is that there is indeed overlap. This new series, of which "The Art of Writing ... etc" is a part, tackles the long out-of-print (is it coming back to print now?) book called "Essay Collection & Other Short Pieces." As of this review, all of the sections of that book have not landed on audio, but I have heard they are all coming. If you do nothing but collect this series, you will be in great shape. There will be no overlap and you will have collected the lion's share (heh) of Lewis's essays. But if you have already, or plan to, buy the very good audio collections "God in the Dock" and/or "Weight of Glory" you will have a lot of repeats. If you go over to Amazon's site and take the time to jot down the tables of contents from the printed forms of God in the Dock, and Weight of Glory, and then go to the REVIEWS of the out-of-print Essay Collection & Other Short Pieces, some kind reader has taken the time to type out all the contents of that book, which are now the contents of this series of audios.But if you want a quick and easy strategy to pick up a great collection of these audios, you can do what I have done:1. Buy God in the Dock on audio. It's a long collection, it's cheap, and it's very good.2. Buy Weight of Glory on audio. It's short, but contains surely his best essay (Weight of Glory) and probably his second best as well (Transposition).3. Buy English and Literature, The Art of Writing and the Gifts of Writers, and The Church from this collection. These are the three parts of the new collection (again, the one taken from Essay Collection & Other Short Stories) which, if my observations are right, contain the least overlap with the other two collections. DISCLAIMER: I have made so many little check mark notations and inked dots and highlighter marks in my printed Lewis essay collections that I've forgotten what some of them mean, so please do poke around in tables of contents to form your own strategy. But just know that A) there is overlap and B) it is absolutely worth the headache to track down a good audio collection of these essays, whether by mixing series or just buying all of this one series. Happy hunting.

loved this, but it is harder to follow sometimes if you haven't read some of the works that Lewis cites for his arguments. other than that, amazing as is typical for Lewis!!

An intriguing look at an author's critique.

C.S. Lewis takes the reader through the writings of many of his contemporaries and points our how ine might act or more importantly write as an author. Remembering the time that has past from when these words were originally written is key to remember when reading.this text. Overall worth reading.