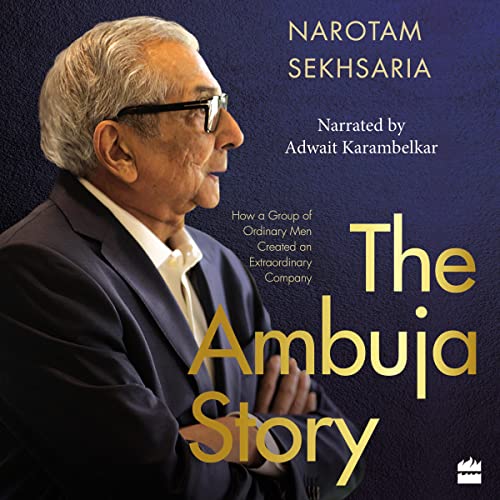 "I had never seen a cement plant in my life. I had no idea about limestone deposits or the cement industry in Gujarat. And I had never negotiated an industrial agreement. Yet, in the next few weeks, I would need to be ready for a substantive meeting with Gujarat government officials."

The year was 1983. A cotton trader, still in his early thirties, began to dream big. His aspiration was to become an "industrialist". The venture he was about to embark on was uncharted territory for him. He knew nothing about cement, limestone or anything remotely associated with it.

In the era of Licence Raj, where everything from production to consumption was controlled by the government, Narotam Sekhsaria saw the huge potential in cement and its role in a growing nation. Trusting his instinct, he started Ambuja Cement and went on to create one of the most successful cement companies in the world.

Told by the man himself, The Ambuja Story is a tale of grit, determination, honesty and integrity. For a cement company, it's a unique case study that broke many stereotypes, such as that cement production can't be an environmentally friendly activity, good cement can't be cheaper, and it's difficult to market a product as boring as cement.

The Ambuja Story provides a new perspective on business and life, inspiring the next generation of entrepreneurs to scale greater heights.

What listeners say about The Ambuja Story

The best business book I have heard

Thoroughly enjoyed listening to the story of building a business with dedication, honesty and humility.
This has been the most enjoyable book I have listened to in a long time.
Amazing personality Mr Narotam Sekhsaria Ji. Hope you are enjoying your much deserved retirement.