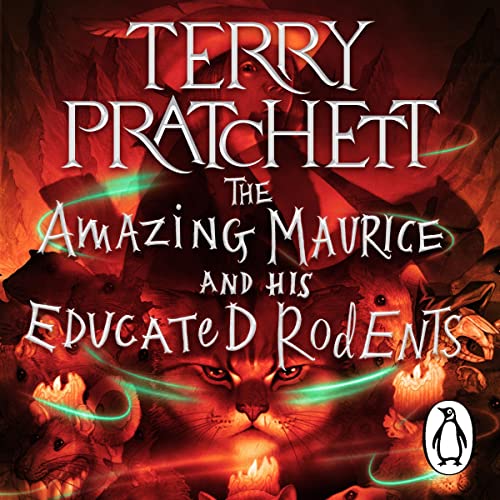 The Amazing Maurice and His Educated Rodents

The book that inspired the big-hit new film

The audiobook of The Amazing Maurice and His Educated Rodents is read by Ariyon Bakare (Good Omens; His Dark Materials). BAFTA and Golden Globe award-winning actor Bill Nighy (Love Actually; Pirates of the Caribbean; Harry Potter and the Deathly Hallows) reads the footnotes, and Peter Serafinowicz (Star Wars: Episode I - The Phantom Menace; Shaun of the Dead) stars as the voice of Death. Featuring a new theme tune composed by James Hannigan.

Maurice, a streetwise tomcat, has the perfect money-making scam. Everyone knows the stories about rats and pipers, and Maurice has a stupid-looking kid with a pipe, and his very own plague of rats—strangely educated rats...

But in Bad Blintz, the little con suddenly goes down the drain. For someone there is playing a different tune and now the rats must learn a new word.

The rules have changed. And this story is no longer dancing to the piper's tune…

With a new introduction written and read by Rob Wilkins.

The Discworld novels can be enjoyed in any order, but The Amazing Maurice and His Educated Rodents is a standalone novel.

The first book in the Discworld series—The Colour of Magic—was published in 1983. Some elements of the Discworld universe may reflect this.

What listeners say about The Amazing Maurice and His Educated Rodents

The book, as all Pratchett books, is marvellous!

The reading by Ariyon Bakare is spot on! I had liked Stephen Briggs' performance on the older audiobook (I had especially liked his Michael Caine - like Darktan), but was annoyed by the American accent he had, for some reason, given to the Amazing Maurice. Ariyon Bakare's Maurice really sounds like a British cat would sound (if said cat spoke in English).

Years ago, one of the first books I ever took an interest in was an audio book, borrowed from the library, of Tony Robinson reading The Amazing Maurice and His Educated Rodents. This new performance is unabridged and made me feel like the little boy again, listening to a new story that I thought I knew. It presents concepts that many children’s stories don’t think to present to children, but in a comical and lighthearted way. I always find reading or hearing a Pratchett book is like having a philosophy lesson, presented in a fun and engaging way.

Gripping and so well written. Pratchett at his best! Terry P was an astute reader of the human being. What vivid writing!

wasn't sure at first

But monsieur Bakare certainly came up trumps. His characterization of the two main humans was really good, but Maurice and the individual rats was great. Well done sir! The story is one of Pratchett's best, even if it's a stand-alone Discworld novel and supposedly for young adults. I thoroughly enjoyed it (twice), leaving the car was a struggle.

Just a wonderful story from an enlightened soul

A wonderful story beautifully performed. TP was the best Prime Minister we never had. Things wouldn't be so bad if stupid people had read his books and learned from them

I read this book when it first came out but had forgotten the details of the plot since then, so listening to this recording was like hearing the story for the first time again.

Ariyon has a wonderful voice and doesn’t go too over the top with character voices/accents, which works for me. His pacing is perfect and the combination between the writing and the narrator is just fantastic when it comes to building tension. I audibly gasped at the end of chapter 8 and I had to keep coming back to listen to more and find out what happens to this little crew of loveable characters.

These new recordings have lured me back into the Discworld, and I couldn’t be happier about it. I look forward to listening to the rest.

Where rats and cats fear to thread

Maurice is a talking cat that has his own group of rats following him, as well as a boy. Together they get rich by pretending to save towns from rats. But their last job goes very wrong. There's something else in the shadows of their new town...

I wasn't expecting the book to be scary, but it is made for Halloween! Peter Seratinowicz does a very good narration job (the rat king whispers are scary good, but not good in noisy transports - be warned!). A brilliant story about stories. The short note from Rob Wilkins at the end is also worth it.

Having read the book, I was looking forward to the new performance. Sadly dissapointed :(

Narration is poor and looses the feeling of the story. his low rumbly voice is distracting and the voices don't match the characters.

Why is Maurice pronounced the American way (Mawreece) ? This and the many other basic mispronunciations really spoiled my enjoyment of this book. The old version was much better.