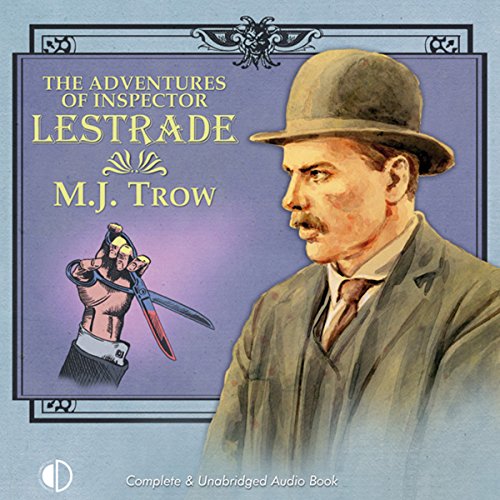 The Adventures of Inspector Lestrade

It is 1891, and London is still reeling from the horror of the unsolved Ripper murders when Inspector Lestrade is sent to the Isle of Wight to investigate a strange corpse found walled up in Shanklin Chine.

It is merely the beginning of a series of brutal and bizarre killings so apparently random, that only a warped genius could be responsible. Even when Lestrade pieces together the extraordinary pattern behind the crimes from the anonymous poems sent after each murder, he is no closer to knowing the identity of the sinister, self-styled “Agrippa”. It becomes a very personal battle and Lestrade's desperate race to avert the next death takes him from London to the Pennines and back.

What listeners say about The Adventures of Inspector Lestrade

These tales are generally entertaining, peppered with excruciating puns, Malapropisms, Spoonerisms anachronisms, and doubles entendres. Expect bad taste - and utter political incorrectness! Sometimes it feels he's gone too far, but since the (now) appalling views are expressed by bampots, it's easier to grimace and pass on.
The author himself narrates, and he has a pleasant voice, but some of his comic accents are painful, and his pronunciation of French and German words/names, here and in other books, is surprisingly inaccurate from a teacher. Easy listening, ingenious.

lestrade is hunting another serial killer. this time the killer is sending a poem to lestrade after each murder.
well written and performed by m.j. trow. I was surprised who the killer was at the end o the book.
enjoyed the story.

Being a fan of the Lestrade books, I was really pleased to see they were available on Audible. A bonus having it read by the author, too - he clearly has a feel for the story and the characters. His voice characterizations are good, and are distinct. The story itself is well-crafted, as each tantalizing twist of the plot. Add in Trow's subtle wordplay and puns, and you have a very enjoyable way of spending a few well-rewarded hours.

M J Trow potrays Lestrade as a hapless bumbling idiot shot through with streak of ruthless detective genius; the non-stop stream of puns and spoonerisms are the verbal equivalent of Les Dawson at the piano - good 'bad' writing at it's most skilfull. But if you are a serious fan of 'the great dectective' this may not be for you!

I'm a dedicated SH fan, therefore I assumed that an Inspector Lestrade story would be a real bonus. Unfortunately, the story and the main character are weak the narration is irritating and I didn't finish the book. A clear case of someone jumping on the band wagon. Not recommended

A nice piece for casual Holmes fans . Fun to see Lestrade as a developed character interacting with notables of the late 19th century. The mystery itself would have been solved by Sherlock in a chapter or two. Trow is a very good voice actor.

Where does The Adventures of Inspector Lestrade rank among all the audiobooks you’ve listened to so far?

Excellent storyline and fast moving that held me to the end. Trow is an excellent author and narrator.

Inspector Lestrade, as Trow depicts him as a resolute investigator, who does not allow Holmes to deflect him in his duties.

The end which I will not give away here. It was excellent right up to the very last word.

Very good series. I have read two now and will definately read the rest. Trow is now one of my favorites.