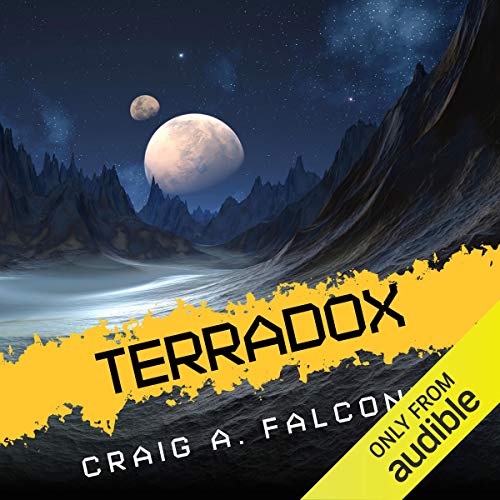 By: Craig A. Falconer
Narrated by: Dina Pearlman
Try for £0.00

They were heading for Venus. Somewhere else found them first....

When a sudden impact sends a spacecraft bound for a distant research station hurtling toward a previously unseen and inexplicable planet, responsibility for the safety of its passengers immediately falls on Ivy 'Holly' Wood, a former poster child of the public space program now fleeing Earth's tyrannical leadership.

The mysterious planet's startlingly Earth-like atmosphere initially breeds optimism among Holly's group of stranded survivors, but before long it becomes clear that Earth's rules don't apply and that nothing can be taken for granted.

With all hopes of escape dependent on discovering the true nature of this increasingly hostile planet, Holly and the rest of the desperate survivors know only one thing for sure: Their newly discovered world will not give up its secrets without a fight.

Terradox is a sci-fi thriller/adventure novel from the author of the breakout best seller Not Alone, an Audible.com 'Best of 2016' finalist.

What listeners say about Terradox

the story is fine. not as good as "Not Alone" but a good solid story. unfortunately Dina Pearlmans narration is nothing short of robotic. the recording seems to have a Strange Echo that makes it sound like it was recorded while she was sitting on the toilet, and is very off putting. her attempts at a British accent make Dick van dyke sound good. I only put up with it as the book is only 11 hours long. much longer i would have had to tap out. she sounds like Mrs Stephen Hawkings.

The Falconer has landed!

This is a great listen - an exciting and well-thought out science-fi thriller/whodunnit/adventure, with enough twists to it to maintain your interest.

The story follows Holly Wood and the other occupants of a spaceship that inexplicably crashes into a planet that no-one can see, and absolutely cannot exist. How is it there? How will they survive? Can they every get home?
The planet is dangerous, and they need to try and find a way of getting to safety. Then they discover that this already weird story isn't the half of it. So it turns from fun sci-fi to a thriller/whodunnit.

It got off to a slightly slow start (it seemed to have a lot of scene to set, which took some time), but once it picked up it rollicked along and was a thoroughly enjoyable adventure. The narration was largely good, although the English accents were a little wide of the mark which I found distracting during the slower parts of the story. Honestly, if the narrator can't do the accent wouldn't it be better not to try and just to use their own voice? Or maybe writers should consider making their characters from more obscure places - if they'd been Norwegians who grew up in Kenya, I'm pretty sure it would have seemed spot-on to my ear.

But, the main point is this is a great book, well worth the listen.

From a gripper "Not Alone" to this, very disappointed. Slow to get into, slow all the way through

Oh dear ! not anything like his brilliant first book which should be made into a TV series btw!
this is a sci fi by numbers not worst book ive listened to but by far not the best suspiciously similar to Artimis but not as good !
if any one knows craig please ask him to do a sequel to NOT ALONE Pleasse!!!!!

Not as good as &quot;Not alone&quot;

I bought Terradox on the strengh of Not Alone, which was an excellent book, although I felt it lost its way a bit towards the end. Terradox isn't a bad book by any means, but it didn't live up to my expectations. The story deals with the same kinds of things as Not Alone -- conspiracies, government corruption and cover-ups, space defence -- but in a much more fictional setting. So while Not Alone was based on real conspiracy theories (or actual conspiracies, in some cases), Terradox is more speculative.

The story is fast-paced and the plot surprises keep, well, surprising; but I thought that the characters were not particularly convincing. The writer's attempt to write a character with conflicted motivation was not, I thought, a huge success. In a sense, I was reminded of &quot;young adult&quot; books by, for example, Philip Pulman. Being compared to Pulman is not a bad thing for an author, I think; but Falconer's fictional worlds and situations do not have sufficient depth and richness to compensate for the thin characterization, while Pulman's do.

So, in the end, not a bad book, and not a regrettable purchase, but not as good as I expected.

Before I start I would like to say that this is a very good book and I've only dropped it one star on the story rating because this is a well written book with a very good story that keeps you engaged all the way through.

I got this book because Mr Falconer's first book (Not Allan) was outstanding. It had some plot twists that I found completely unexpected and I loved the book from start to finish.

This book feels like it was maybe finished to hit a deadline given by the publishers. It has plot twists but most of them I picked up on from the very first clue... And yes, I mean the very first clue... It took chapters and chapters for the main characters to catch up with me. There was only one or two twists that I saw much closer to the reveal but nothing that really kept me on my toes.

So in shot, a good book that you will enjoy if you love Sci-Fi like me, but unfortunately falls short of his first work.

"Two hundred choices and they're all algae."

An interesting S.F.adventure story, cleanly written which, though dependent on technological achievements, does not try to blind the reader with science, explaining enough without interfering with the story. Character development is sufficient if a bit fluffy and there is enough that is unexpected to lure on the reader. Some aspects felt annoyingly absent, however, like the actual how of the planet and the background situation which had put it into being, but perhaps more of this will emerge in future volumes. Meanwhile, the story remains as an enjoyable non military young person's adventure story.
Read by Dina Pearlman, this Audiobook could have been better with a different narrator. Although her pacing is good and her modulation carries vocal interest, her voice is somewhat nasal and abrasive and her character voice differentiation poor, most ending up sounding much like the main protagonist, Holly, who in turn sounds like the text itself. There are occasional exceptions, as with the young boy, Beau, but given that there is a fair amount of dialogue, this does cast a bit of a shadow over the book as a whole.

The plot is dumb, the characters are so unrelatable, that I couldn't tell who was whom and this didn't really matter because every line made about as much sense if it was delivered by the little boy. The only way to enjoy this book is to pretend that the whole thing takes place in the kid's imagination.

I spent most of the book trying to figure out if the narrator was horrible, or if the writing was just so horrible that it was impossible for a narrator to salvage it. I'm pretty sure it was equal parts of each.

Also, it's incredibly jarring when someone doesn't know how to pronounce the word 'habitable.'

I could go on, but the bottom line is that I wish I hadn't ever listened to this book. It's too late for me, but you can still save yourself.

I loved the story and finished it in one day, but it did take me a little bit to get used to the sound quality of the book. Was this recorded inside a pop can? If they fixed this, Terradox would be damn near perfect.

a very enjoyable story. Narrator Dina Pearlman did did an outstanding job her voice range was amazing. Also her command of dialects was extraordinary to say the least. It was very easy to get fully emersed in the tale.
The author Craig A Falconer brought forth an excellent story concept. this was for me well worth listening to.
Yes by all means purchase this Audible book, it's really great Sci-fi.

Significantly less good than Not Alone. This was a huge disappointment. I kept hoping that it would get interesting and then it ended.

It started off ok, but the characters were flat and the story lacked excitement and depth. I literally went through the last 5 chapters by 5 min slips and at 3x

I have rarely written a review but this book made me want to write one. I'll start off by saying that I liked Not Alone. I never got into this book though. The author constantly used compound complex sentences and after a while I found it exhausting to listen to. I felt like every other sentence had details that weren't necessary to tell the story. The narrator was OK but she didn't seem to put much inflection into the reading. Finally there was a constant echo in the file.

It wasn't a terrible story, but it wasn't great either. It was one of the few books where by the end I felt like I just needed to get through it.

I really enjoyed the story, Falconer is one of my favorite new authors. Well developed characters and a fun plot. I also appreciate Pearlman's performance, she is a great vocal actor.

"RECOMMENDED" is to push the stuff no one wants?

What could Craig A. Falconer have done to make this a more enjoyable book for you?

It has about the speed of a autobiography. Maybe he should write these in the future.

This is an artificially stretched out book if you ask me.

I am more than half in and nothing really happened so far. All that did could have been explained in 1 chapter. Wow is that boring.....

With little to no character development, poor prose, predictable plot, I tried to give this book a chance but it failed to rise above a very low bar. One star is giving this book too much credit.

This story line plodded along with dialogue that would never happen between adults. There was a big bad villain but he was never there. The kids knew as much as the adults and the adults needed help. Bad interaction between characters