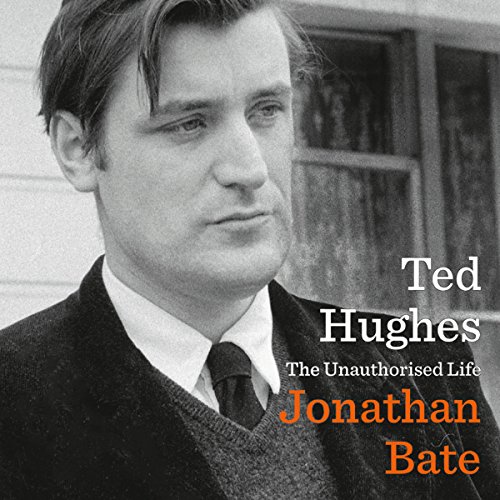 By: Jonathan Bate
Narrated by: Mike Grady
Try for £0.00

A magisterial life of Ted Hughes - identified recently as the only English poet since the First World War with a claim to true greatness and one of Britain's most important writers - to be published on National Poetry Day by prize-winning biographer Jonathan Bate.

Ted Hughes, Poet Laureate, was one of the greatest writers of the 20th century. He is one of Britain's most important poets, a poet of claws and cages: Jaguar, Hawk and Crow.

Event and animal are turned to myth in his work. Yet he is also a poet of deep tenderness, of restorative memory steeped in the English literary tradition. A poet of motion and force, of rivers, light and redemption, of beasts in brooding landscapes.

With an equal gift for poetry and prose, and with a soul as capacious as any poet who has lived, he was also a prolific children's writer and has been hailed as the greatest English letter writer since John Keats. With his magnetic personality and an insatiable appetite for friendship, for love and for life, he also attracted more scandal than any poet since Lord Byron.

At the centre of the book is Hughes' lifelong quest to come to terms with the suicide of his first wife, Sylvia Plath, the saddest and most infamous moment in the public history of modern poetry. Ted Hughes left behind him a more complete archive of notes and journals than any other major poet, including thousands of pages of drafts, unpublished poems and memorandum books that make up an almost complete record of Hughes' inner life, preserved by him for posterity.

Renowned scholar Sir Jonathan Bate has spent five years in his archives, unearthing a wealth of new material. His book offers for the first time the full story of Ted Hughes' life as it was lived, remembered and reshaped in his art. It is a book that honours, though not uncritically, Ted Hughes' poetry and the art of life writing, approached by his biographer with an honesty answerable to Hughes' own.

Praise for Jonathan Bate: "Absolutely dazzling - illuminates the whole man and the influence he has in our lives." (Simon Callow, Sunday Express)
"Occupies the territory of biography, literary criticism, theatrical and social history, and a journey across its landscape is one of constant delight and illumination." (Sir Richard Eyre, Financial Times)
"The best book about Shakespeare for a generation." (Philip Howard, The Times)
"As brilliant an account of the Bard's iconic universality as you could hope to find." (Michael Billington, Guardian)
"The theme of this wonderfully written, diverse book is diversity itself, and the range of the essays serves only to confirm the disparate nature of Shakespeare's achievement." (Peter Ackroyd, The Times)
"The liveliest and most intelligent general book on Shakespeare I have read for a long time." (John Gross, Sunday Telegraph)

What listeners say about Ted Hughes: The Unauthorised Life

Having read read much of and about Hughes I feel this is an incredibly fair, honest, and insightful work about a very private, flawed but brilliant man. It is also inevitably serves as Plath's biography and deals with her in an equally fair and honest manner, which is not always the case in works about these two giants of poetry. I think this is the new benchmark when it comes to Hughes.

Enjoyed every minute of this..
Brilliantly written, will listen to this over and again. Even those who aren't familiar with the Hughes story will enjoy this.

This is a very good book which is very revealing about the life of Ted Hughes. I'm no fan of Syvia Plath but she deserved better. He might be considered a good poet but his attitude and behaviour towards women left a lot to be desired.
This is a well written and accessible book. Good narration too. Definitely recommend it.

Could have done with more poetry and less analysis

Worth a listen if you’re dead keen on Ted Hughes and Sylvia Plath the people. If you’re more into their work, go to it directly.

Makes Hughes’s poetry accessible to those without a classical education and then bores them with lengthy classical comparisons.

It’s a shame Hughes had to relate so much to the classics; he was good enough to create original material.

Could have done with more poetry reading and less analysis.

Hughes’s life was a tragedy. Expect to hear all about it in great, scholarly, repetitive detail.

Story 3/5. Performance 5/5. Overall 4. This is why I like audiobooks: I can do other stuff while they are playing. The many boring bits flew by!

everything held in steady balance

this life, like none other, told with care, concern, compassion and formidable detail, deserves attention

I just spent a stunning 25 hours listening to the epic myth that is Ted Hughes. Wouldn't have missed a single moment of it. I bought his complete poems and letters to refer to as I listened along. One of the best books I have read for a long time. I will never forget it, it has sparked off so many leads and I want to read more poetry of Sylvia and Frieda now. The narrator was truly outstanding. Loved him reading in Ted's voice. I don't think anyone could regret listening to this audiobook as he is a national treasure and I believe we all should understand his side of the Plath/Hughes story.

So much of what everyone knows about Ted Hughes is echoes of his tragic life and love with Sylvia Plath. This book accepts that, even confirms it as the central fact in a fascinating life. Yet Bate gives us so much more as he opens the windows onto the world of a fascinating, flawed and fantastic man.

As much as a classic poet, he is the complete teacher for us all, if and when we like to write creatively.