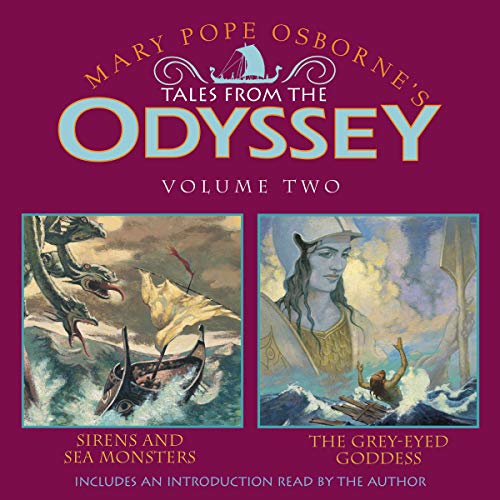 Tales from the Odyssey

By: Mary Pope Osborne
Narrated by: James Simmons
Try for £0.00

Mary Pope Osborne retells thrilling stories from Homer's Odyssey, one of the greatest epics of all time.

Volume 2 includes:
Book Three, Sirens and Sea Monsters
Odysseus and his men have done what no other mortals have done: returned alive from the terrifying Land of the Dead. Armed with warnings and advice from the ghost of the prophet Tiresias, Odysseus is determined to finally sail home to Ithaca. But the enchantress Circe tells him the Greeks will face even more horrors on their journey, including an encounter with Scylla, the six-headed monster, and Charybdis, the deadly whirlpool. Who will survive these terrors, and how?

Book Four, The Gray-Eyed Goddess
Odysseus is trapped on the island of the sea goddess, Calypso. The beautiful goddess wants him to forget his wife and son and marry her, but he is determined to return home. Back in Ithaca, Odysseus' wife, Penelope, and son, Telemachus, desperately fend off suitors who want to marry Penelope in order to take control of Odysseus' island. It is only with the help of the gray-eyed goddess Athena that they can hope to ever become a family again.

What listeners say about Tales from the Odyssey

Wonderful performance, excellent writing, I’m very glad to able to say I’ve gotten this far in The Odyssey by Homer. The only gripe I have is with Odysseus himself who is not, in fact, the clever rogue I’ve heard all my friends claim he is. He, instead, is a normal man with good listening skills trying to get home. The Gods and Demi-Gods intervene and help him at nearly every turn! They always tell him what to do and how to do it and that he’ll succeed when he does it. And what happens? Exactly that! The one time he doesn’t follow directions he loses a whole chunk of his forces and promptly goes back to following directions. I had so much fun finally understanding this story but it’s like an adult Greek version of kindergarten where you don’t expect the one kid to do what they’re told, but then the do it perfectly and so you respect them over the other kids? That’s Odysseus. That’s what makes him a legend: he’s a good listener.

Fun with the kids

We listened to this as part of our homeschool program this year. As well as the 1st Volume. We have all really enjoyed the story together. We plan to download volume 3 immediately!