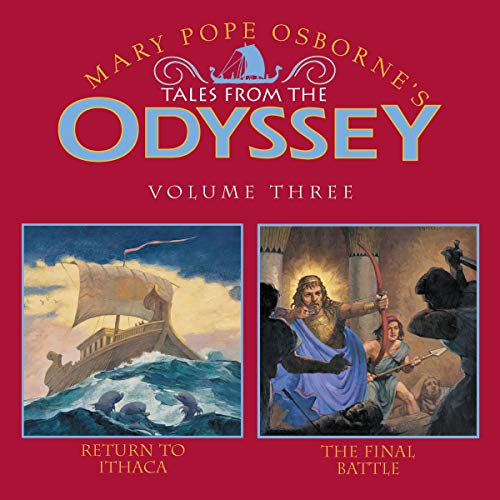 Tales from the Odyssey

By: Mary Pope Osborne
Narrated by: James Simmons
Try for £0.00

Mary Pope Osborne concludes the exciting adventures of Odysseus, with two new books, each based on episodes from The Odyssey.

Book Five: Return to Ithaca: After years of captivity on Calypso's island, Odysseus finds himself on the shores of yet another strange land. Meanwhile, his wife, Penelope, fears for their son Telemachus.

His enemies - Penelope's unwanted suitors - plan to ambush and kill him upon his return to find his father. But the family's years of suffering come to an end, as father and son are reunited in a series of startling, strange, and magical events. Odysseus is finally home. And now his revenge beings....

Book Six: The Final Battle: After struggling against the gods and his fate for more than 20 years, Odysseus has returned to Ithaca at last. But things have changed: His island has been overrun by suitors who clamor for his wife's hand in marriage and plague his son Telemachus. With the help of the grey-eyed goddess Athena, Odysseus and Telemachus must set out to regain control of Ithaca.

What listeners say about Tales from the Odyssey

A must-hear for kids of all ages.

We homeschool and have used the entire series in our Ancient history studies. Both my 8 year old and 13 year old loved them all.

Enraptured by all, along w/my 11yr old son, listening in bits, longing for tales unending!

We completed the entire series as part of our study on the ancient world. Our children (ages 4, 6, and 8) loved the stories so much. Many will not find the story suitable for this age group as there is quite a bit of death and monsters. Just use your personal judgement on what is appropriate for your family. Our oldest got the most out of the tale, but they all begged to listen to this one! Highly recommend!

dive into Homer with the kids

If you could sum up Tales from the Odyssey in three words, what would they be?

What other book might you compare Tales from the Odyssey to and why?

Lord of the Rings - it's a saga

Awesome introduction for children to the Odyssey

Would you consider the audio edition of Tales from the Odyssey to be better than the print version?

Yes, especially for children. I think this tale can really move, interest, and excite children w/reading but often they don't receive this introduction because the versions of it are difficult to read. This series has brought to life The Odyssey for my family and I love it. Great great job. Now if I could get The Story of the World series in a downloadable version by Susan Wise Bauer--that would also be great.

I can't think of a better reason to allow my 10 year old to stay up way past her bedtime which occurred every time I played this series at night after she finished her regular reading.