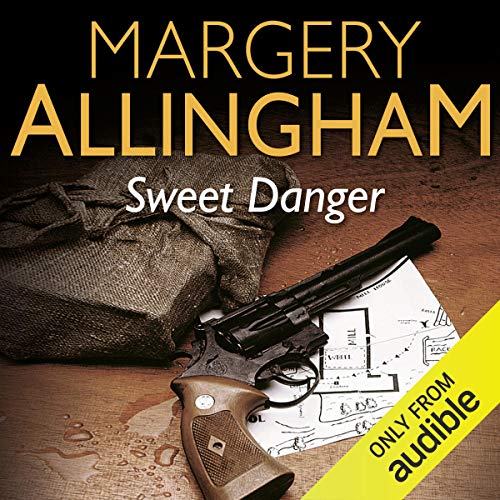 By: Margery Allingham
Narrated by: Franis Matthews
Try for £0.00

Way back during the Crusades, Richard I presented the Huntingforest family with the tiny Balkan state of Averna but since then the kingdom has been forgotten, until circumstances in Europe suddenly render it extremely strategically important to the British government. They hire unconventional detective Albert Campion to recover the long-missing proofs of ownership - the deeds, a crown, and a receipt - which are apparently hidden in the village of Pontisbright.

On arriving in Pontisbright, Campion and his friends meet the eccentric, young, flame-haired Amanda Fitton and her family who claim to be the rightful heirs to Averna and join in the hunt. Unfortunately, criminal financier Brett Savanake is also interested in finding the evidence for his own ends.

What listeners say about Sweet Danger

Another matchless performance from the late Francis Matthews. He captures the characters and the era perfectly. After I finished this I started listenng to another one narrated by David Thorpe.......very second rate ... Wish more Matthews recordings were available

I like Majorie Allingham's vintage detective novels and can put up with a lot of her whimsy because of the fantastic atmosphere she can build up.
However this was too ridiculous for me and also had a thoroughly irritating heroine, Amanda. Allingham was obviously smitten with her daft wilfulness but it set my teeth on edge. The trio of young artistos helping Campion were almost as exasperating, and the plot was pants.
Far far better are the novels which also feature Detective Inspector Luke. I'd recommend ' The Tiger in the Smoke' for starters.
The reading was quite good but there's only so much you can do with such weak material.

Marvellous narration lifted this up and out of cliché

Matthews’ marvellous narration is an utter delight and lifts the writing out of cliché. Every time I thought I couldn’t bear another ‘hereditary paladin’, the narrator kept me going.

This is a lovely mystery, with love, death and a treasure hunt. Read brilliantly again by Franis Matthews.

Loved this one too, twists turns and delightful mischief, on to the next adventure.

This is one of my favourite Campion books and is very well narrated by Francis Matthews.

One of her best

Narration is spot on. Campion's first meeting with Amanda, superb characterisation,implausible but believable plot,heroes and villains in abundance.

An excellent reading of a classic mystery

Allingham is deservedly ranked as one of the classic master writers of the 1930's and 1940's. Her plots are inventive, her characters are attractive and consistent, and her descriptions of place often capture, in nostalgic detail, life in an England that was already passing away.

Sweet Danger is a mystery with an amusing twist, involving international diplomacy, a stolen inheritance and a ruthless oligarch. There are some memorable vignettes, such as the description of the hotel proprietor M. Fleury, some affectionate accounts of life in a Suffolk village a hundred years ago, and some intriguing descriptions of magical rituals. All most enjoyable.

Particular credit is due to the narrator Franis (Francis?) who brilliantly captures the light, whimsical tone that was in vogue a hundred tears ago, without making it sound either supercilious or ridiculous---quite a rare accomplishment. His reading is clear, well-paced and very easy to listen to. Full marks!

Brilliant and thrilling story with another supreme performance by Francis Matthews. The story is part crime, mystery, Wicker Man and Denis Wheatley witchcraft. Campion is a truly unique character in crime writing, brought brilliantly to life by the most beautiful language of one of the Queens of Crime. A whimsical and laugh-out-loud romp from beginning to end, with its share of serious action and capers.

Sweet Danger is a campy sort of mystery, though the mystery really isn't much of a mystery. Campion is drool and amusing as he and a group of friends try to find the true heir to a piece of strategic property in a far off Balkan country. We get to meet the eccentric Finton family, in particular young Lady Amanda Finton, who scrape by running a mill. The Finton's hold the keys to the mystery. Lady Amanda likes to tinker with electricity, batteries, and radio. The bad guy and his cronies are obvious from the start.

Francis Matthews is a wonderful narrator. I prefer him to David Thorpe, whose Campion I find grating..

For its genre an interesting adventure

Well, we have a mysterious hero doing a mysterious job for his government. A few items must be found. A treasure hunt?
We have a disinherited member of nobility who is seeking recognition and his estates. A little Crusade history. A Demonic Doctor with an equisite cellar and a red haired lass who runs an electric car and a windmill. And the baddies also on a hunt.

It is a delightful listen. Not at all serious.

Great narration and wonderful story from one of the classic writers of the British mystery genre.

Campion takes on a strange case involving a tiny kingdom and what amounts to a treasure hunt to find proofs to the heir. Lots of action here, and it's all well told, with excellent characters. Francis Matthews and David Thorne both bring good things to the readings of these novels, different but equally good.

This is one of my favourite books in the series, read beautifully by Francis Matthews. Seriously. The man captures the characters in ways that other
narrators of these books just can not touch. (Okay, there is the one sentence where he accidentally makes Mary sound like Aunt Hat, but that doesn't bother me.)

I love Margery Allingham's characters and her stories. This story is not typical of Allingham's Campion mysteries. It is a bit more tounge-in-cheek and there is no murderer to catch but rather a puzzle to be solved in order to lay claim to a strategically important piece of land. (The story is set in England just before WWII.) Like her other Campion mysteries, Campion is as dour as ever and is counter balanced by his "man" Lugg and other supporting characters. I particularly liked Amanda Fitton's resourcefulness, spunk and courage. The story is well told, the characters are realistic, the villan is scary and everybody's psychological motivations are crystal clear. The mystery will hook you and your concern about the fate of the characters will keep you involved. I had trouble turning it off.

A Good Deal of Fun

In this adventure, the British Government enlists Campion's aid to locate the heirlooms of a forgotten Balkan kingdom, Averna. The Pontisbright family were the rightful heirs to this kingdom, but due to an unconfirmed marriage, the family lost their title. All that is left of this House are the three Fittons: Amanda, her younger brother Hal, and older sister Mary. Amanda, seventeen, becomes Campion's lieutenant as, following the clues of an aged riddle, they try desperately to find the crown, receipt, and deeds before their enemy does.

This is a delightful escapade, filled with secrets, excitement, and the unexpected. Amanda Fitton steals the show from Campion, with her diverting ways and precocious practicality, but he still has ample time to shine with his understated heroism. The intelligent and witty plot, while not necessarily credible, is a good deal of fun and one of Allingham's most memorable.

The narrator is great, and gives Campion a perfect voice.

Delightful characters! So very British in the funniest way. My favorite Campion so far— children’s books for adults. The mill is a wondrous place-hope this setting and these characters show up again in future books. (I am just reading through the series for the first time ever-well, listening through.)

Good narration and interesting story albeit typical Albert Campian novel. Liked how the setting of the mill is used.

Having watched the TV version I was curious about the original. It is different in some places but substantially the same. I was a bit prejudiced against the narrator because I love David Thorpe so much, but he was quite good. Highly unlikely and entertaining!