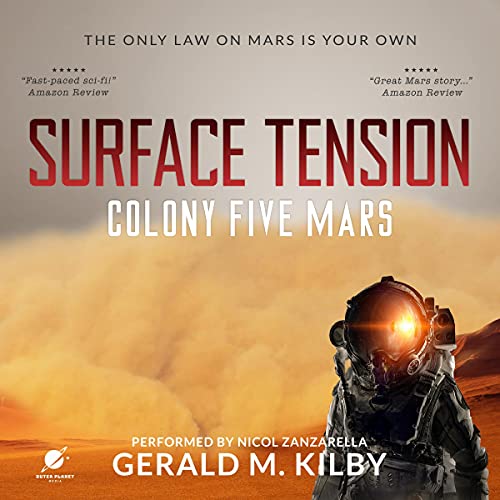 By: Gerald M. Kilby
Narrated by: Nicol Zanzarella
Try for £0.00

A devastating dust storm. A colony on the edge of extinction. Only one person can save them. But first, they need to start a revolution.

In the midst of the most devastating dust storm in the history of Mars, the survival of the half million people who call it home is hanging in the balance.

Yet, for Major Mia Sorelli of the Mars Law and Order Department, it’s just another sol at the office - another sol trying to keep the desperate and angry citizens from tearing themselves apart.

But when she’s sent to investigate the death of a fellow officer in the lawless industrial city of Syrtis, she begins to suspect that the endless dust storm may not be the only thing threatening their survival.

With the help of her semi-sentient droid Gizmo, they uncover a plot so heinous that her faith in humanity is almost shattered - and the only way for her to get it back, and save the colony, is to start a goddamn revolution.

This is the fifth book in a sci-fi series set in a human colony on Mars, but it can also be listened to as a stand-alone novel. The science depicted is, for the most part, plausible. In other words, what’s technically possible with either current technology or taking experimental research a step or two further. That said, you won’t need a calculator or a slide-rule to enjoy the story.

What listeners say about Surface Tension